A few weekends ago I went to the track for the first time since, oh, I think about 1984.

I have often said that the whole “learn to run” thing is proving, well, interesting.  Between waking up my muscles and improving my ankle stability and leg strength (I have a lot left to do on this), it is going to be a long road to 10km.

But what is certain is that I am having fun with it.

On December 12th I scheduled a track session with my coach, Terence Collins, so that he could see my biomechanics and design a targeted strength and training programme to achieve my 10km goal.  Nothing beats a face to face session to set a programme.

It was an awesome day.

My husband and I cycled up to the track at Parliament Hill (right next to the Lido where we do our summer wetsuit swim training). The day was absolutely gorgeous – bright skies, crisp air, and dry.  It was also the first day that I took the “new bike” for her maiden spin.  The total cycle route was 18km – 9 out, 9 back, a few good hills around Parliament Hill for good measure.  I think “new bike” is going to be great fun to ride and cannot wait for more outings! 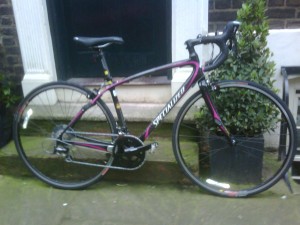 New bike, on the day she came home in November

To start, Terry had me run around the track.  I went once around, a 400m jog.  It always take me a long time to feel warmed up, but after one lap I think he knew what he would be working with.

Terry set me up with some basic strength drills for running.  Clock turning, one legged superman posing, knee lifts and lunges.  Fortunately I really enjoy this sort of thing.

We agreed that I need to sort out my ankle stability with new orthotics. This mirrors the observations made at my British Triathlon paratriathlon assessment, so I dashed an email off last Monday to the National Hospital for Neurology and their team and hopefully will soon have an appointment in the new year.

Since my husband tagged along, Terry had him doing his first ever lunges.  Seeing the look on DH’s face when he did his first lunge ever was hilarious! He had a good time too, and I suspect will tag along in the future.  It also helps his own training as he does the London triathlon each year too.

An hour flew by, and Terry and I agreed to meet once a month for track drills, to monitor my progress and to get me to 10km.

My favourite quote of the session:

“If the Egyptians could build pyramids without PCs, then there is no reason why we can’t figure out how to build muscles without good nerves.” 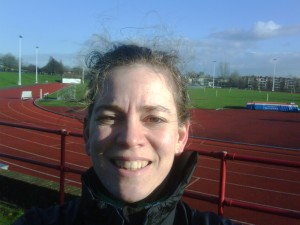 Smiling, even after the session, and sporting hair a la @PunkRockRunner