As many people know, I have been seeking paratriathlon classification since 2009.  Classification – the process of establishing an athlete’s level of impairment – has been a long process for me.  This is often the case for people with more complicated challenges – especially challenges of a neuromuscular nature.

Along the way I have been really fortunate to be included in the efforts that the British Triathlon Federation are making to ensure that paratriathlon – and paratriathletes – are a regular and “normal” part of the sport of triathlon.  This included participating in the Paratriathlon Open Day in October, where elite athletes (members of the Team GB squad) and new paratriathletes (like me) had a chance to meet, train, and talk triathlon. 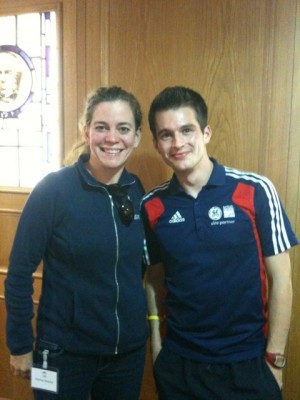 There are many things I could say about the Open Day…

I met some great people… I was finally able to say more than a passing hello to Sarah (a visually impaired athlete) rather than the usual “Hi!” as she has flown past me on her tandem bike in the London Triathlon.  I learned a bit more about albinism from Jane.  I swam laps with David Cooke – never have I met a man with more lust for life!  I practiced open water swimming with Alan – a double amputee paratriathlete – seeing first hand that “para” is only in the eyes of the beholder.  Guy – an athlete with cerebral palsy – kicked my butt on the track.

I spoke with a lot of coaches…  I spent a lot of time explaining my specific challenges, discussing my orthotics, demonstrating the impact CMT has on triathlon (for example, how I can’t really push onto my toes).

I took away some great tips to improve my swim technique (thanks Nick Dunn!)…

I used the day to start the breaking in process for new orthotics (a neverending quest of which I will blog about soon!)…

I saw the best of the facilities that British Universities have to offer when it comes to sport – Loughborough University was an amazing place, and the “healthy” canteen served up a great dinner for everyone which ended the Open Day.

Amongst a packed day, I also managed to have a key conversation with one of the paratriathlon classifiers – a physiotherapist who checks levels of impairment – the person who “decides” if an athlete can compete as a “paratriathlete” (using the International Triathlon Union system of classification).  Basically, we talked about the need for paratriathlon to become more widespread in the UK.  We discussed how I should participate in paratriathlon events in 2011 – regardless of which category of impairment I am assigned. And I learned more about the paratriathlon application to be included in the 2016 Rio Olympics.

The decision is tomorrow – Saturday the 11th of December.

It is not too late to lend your support to the paratriathlon movement.  Click here to fan the Paratriathlon for Paralympics Facebook page.

And keep your fingers crossed.

2 responses to “Paratriathlon – A Paralympic Sport?”