“Make No Mistake, That Body Bag’s for You” ~ PunkRockRacing.com

Ok, that may be a bit of a severe start to my Monday blog.  But if there is one thing that I discovered this weekend, it is that my journey is going to be about giving it my all both physically

On Saturday, once again, I met Coach T at the track for a session.  Expecting another morning full of lunging and squatting and 100s and such, I was kind of taken aback to be asked if I wanted to know the aim of the session.

Um, the aim?  You mean not just leg strength today?

The aim was to just run a continuous mile.

Well, kind of… A continuous mile with the aim to keep the pace exactly the same for all four laps.  Time not important.  Just consistency.  And leg strength.  Stability, footfall, form.  Staying strong.  And do not worry about time.

Now this might sound like a small thing to many people.  And, admittedly, I thought that it wouldn’t be such a big deal for me either.  I thought to myself “no big deal”.  I mean, I managed to eek out a few 5ks in 2009, albeit with a fair amount of walking, some knee issues, unstable ankles, and probably not with form that even came close to being able to be called running form.  But I did them, and so I wasn’t worried about 4 times around a track.

(Except that I don’t think I had run a constant mile since, well, ever, maybe?)

I kept the pace slow, my hips were already feeling tight so it wasn’t hard to keep it slow.  One lap turned into two, turned into three.  And then on the third lap a small thought crept into my head.

Just walk for a second.  You’ll feel a bit looser.

NO.  That was not the goal.  The goal was a continuous mile, NO WALKING.

And the difference between LOOSER and LOSER on this challenge was not just one O but also caving into that small thought.

I battled temptation for about 200m.  And I won that little battle.  I did my continuous mile.

I didn’t wind up in a body bag.  Actually, I felt ok, except for the tight hips.  My legs felt – dare I say it? – strong.  Much stronger than a few months ago.  Not really any pain – definitely no foot pain, some tenderness from my knee tendon stuff, but that will pass with time and as I get stronger.

Saturday was a confidence booster.  And also a sign that this is going to be as much about my mental approach as it is about building my physical strength and fitness.  I always knew that this journey was not going to be easy, but that’s cool, I don’t like easy things.  If it was easy then everyone would do it.

My road may be long as it is taking time to build the strength and stability that I need…  Far more time than I realised it would.  And now I know that I need to battle the little confidence killing voices in my head, too.  But, to quote one of the folks I follow on Twitter, Patricia Brownell:

“The long roads are far more worthwhile than the short ones.  Keep truckin’!” 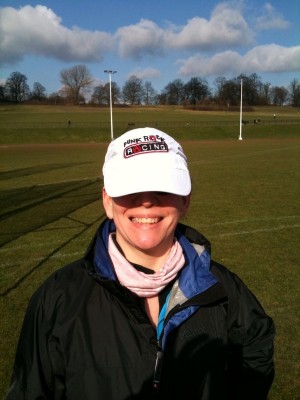 Me at Parliament Hill track on Saturday, wearing my PunkRockRacing hat and smiling big post my 1 continuous mile. My friend Ron is launching Punk Rock Racing on 1 March and, needless to say, the hat sure helped me to get in the right spot with my mental attitude. Thanks Ron!

One response to “Just Keep Going”