One of the great things about having a running coach who is a self-confessed geek about running biomechanics is that it means that my interest in understanding “why” is met with an equally enthusiastic “let’s figure it out” response.  I suggested to James Dunne of Kinetic Revolution that we film my gait and foot strike to try to understand how different shoes were impacting the development of my running form.  James kindly obliged me, not only filming but also extracting some stills for my consideration.

I switched to running in Hoka One Ones in May 2013.  The adjustment was huge for me.  I had been running in Saucony Echelon 1s.  The two shoes could not be more different. 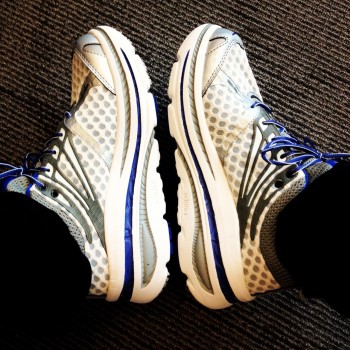 As I wrote at the time, walking and running in the Hokas felt like being on marshmallows – a very cushioned ride. A lot of people in the running world say that cushioning is “bad”, that it doesn’t help to develop good running form or the most efficient stride. But recently there was a study published that seemed to indicate that the amount of cushion does not matter that actually, it is all a very individual thing.

Besides the obvious difference in height (the Hokas have a high stack height, or a lot of cushioning on the bottom of the shoe), the two also have a big difference in drop.

Drop – or the difference in height between heel and toe – is 12.5mm in Saucony Echelon 1s, whereas it is 4mm in the Hoka Bondi Bs.  According to this pretty decent explanation in Competitor, low drop supposedly reduces torque on the body and improves strength and flexibility in the lower leg.  It is hypothesised in the world of running that the lower drop encourages runners to move to a more mid-foot strike, meaning that there is less shock to the knee.  But as we saw in Monday’s post, I still have a mild heel strike with the Hoka Bondi Bs.

So why exactly are the Bondi Bs a more comfortable ride for me?

Something about them makes me feel more stable when I land.  You can see it in this comparison series of photos between the Echelon and the Bondi B.

According to James (and also what I feel when I run) the Hokas seem to encourage my left foot to land in a more neutral position, whereas the Sauconys are adding to the natural supination (rolling out) of my left ankle.  This type of loading on the ankle and foot is important for me to understand and manage – my ankles are fundamentally weak due to atrophy from nerve disease, so anything that leads to a more neutral landing helps me to manage the downside risks of overloading, such as tendonitis.

But what else is it about the Hokas?

James and I aren’t the only ones intrigued by this question.  Pete at RunBlogger has also wondered what it is about Hokas, how they reduce knee pain, how they can be lauded “as good as barefoot” for such a cushioned shoe.  His hypothesis is that Hokas lead to a straighter knee angle, thus reducing load.

Unfortunately the video James and I shot on Saturday focuses on foot landing and not foot / ankle / knee / hip angle.  Looks like we will be doing another round of filming, to see if we can SEE more of what makes running in the Hokas different (and more comfortable) for me.  I also may see if I can get permission to trial and run in some other types of shoes, like Newtons and Nike Frees, just for more comparison.

It’s not about the shoes… It is about understanding what the shoes are doing to my form.  And about continuously seeking to learn, understand, and improve.