On Saturday I had a track session with my running coach, James Dunne of Kinetic Revolution.  I have been working with James since June 2011 to improve my running biomechanics.  Let’s just say that the gifts of CMT and Hypermobility have not left me naturally endowed with running grace.  But I am determined, and I know that with hard work I can improve.  So I headed down to the track on a beautiful slightly overcast summer’s day for a run.

One of the things James offers is video analysis.  I asked if he would mind filming me in the different shoes I have worked my way through since we met in 2011 (yes, I still have them knocking around the house – most are in good shape, retired as they exacerbated tendon pain or made me feel less stable in landing than others).  So I stuffed my bag full of shoes, and at the end of the session we got to work. 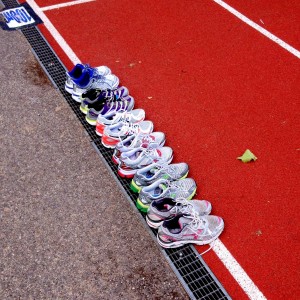 from right to left: Mizuno Waverider 14; Brooks Ghost 4; Saucony Echelon 1; Asics Nimbus 14; Hoka One One Rapa Nui; Hoka One One Bondi B

One of the guys at the track asked if I like shoes.  Haha.  If only he had time for the full story.  I have these shoes mostly because my feet have hated them, and I’ve moved on, looking for a more comfortable ride!

Only the Mizunos were totally dead, I felt it when we started filming, just hard on the legs dead shoes.  The others are still in good shape.  I was especially interested to see how the shoes influenced my form.  I know, it is form above all that matters.  But how would footwear influence form?

It was especially interesting to compare the Hoka One Ones.  Two different models.  Subtle differences.

Here’s some quick screen grabs.  Can you spot the differences? 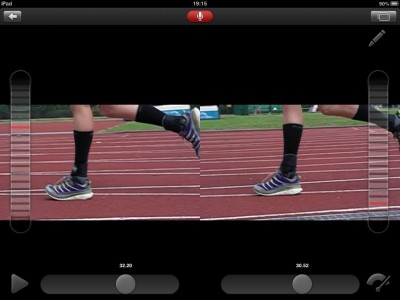 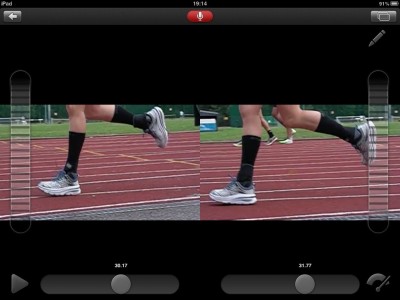 I’ll be doing a few more posts on what we learned during our filming.  Perhaps most surprising of all?  I’ll post some video of that… Tomorrow!

2 responses to “6 Pairs of Shoes and My Naked Feet”