Earlier this year I was told by doctors that the structure of my knee meant that I should stop running – IMMEDIATELY.  I hated this binary answer.  So I took the doctor’s advice and made an appointment with a sports medicine doctor – someone who would help me to develop a rehabilitation strategy.  The sports medicine doctor I found had a specialisation in rheumatology, meaning he knows joints and also knows about connective tissue disorders.  We discussed a rehab approach..And I mentally prepared for the fact that 2013 would be the end of my time in triathlon, the end of my running days.  I earmarked The British 10k as my “last stand alone” 10k, and the London Triathlon as my “last Olympic distance triathlon”.

It’s Not Over Until It’s Over

When I last met with Jon Houghton, my sports medicine doctor, we talked about how my rehab and focus on glute strength work seemed to be helping my knee, and how my use of the Alter-G was proving successful and could potentially extend my “last season” a bit longer than we had previously thought – beyond this year.  But that I would sensibly need to manage each training session and each race for my knee, to monitor and watch how I reacted to loading and races.  And to take each run as it came.

So that is what I did at the British 10k – took it one step at a time.  I ran with a deliberate run-walk strategy (3 minutes run – 1 minute walk) with an addition 1 minute walk through each aid station to take water and cool down as it was so hot that day. (It was about 28C/86F – an unusual temperature for London, and one I am not used to racing it!) 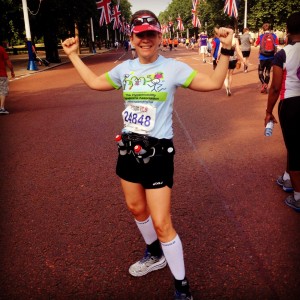 I ran. I smiled, I laughed, I chatted.  I ran in my sports bra only (my first time doing this EVER).  I was pleased with my result given the hot day.

And post race I waited. And watched. And expected. I knew that my knee would get swollen.  I knew the race was stressful on my joints, that I probably took my knee to its limit.  I expected a very negative outcome.  I prepared for the fact that the 10k would probably be one of my last runs.

But none of that happened.

My knee didn’t explode.  Sure, it was a bit swollen, but something that I was able to manage with a bit of ibuprofen and my 2XU compression tights.  Nothing seemed out of control.  In fact, I ran three days post race.  And that run didn’t trigger any swelling either.

In the clear?  Who knows.  But one thing is certain.  The race was a gift.

A gift and a validation that my cautious approach and use of the anti-gravity treadmill was helping me to build the strength and endurance to be able to manage running. A gift in that I knew that I could do another race, that I had not jeopardised my last planned race for 2013 – this weekend’s London Triathlon.

The British 10k – and my body’s response to it – was a gift of hope for more races.

This weekend is the London Triathlon.  I plan to approach the race deliberately, sticking to my 3:1 run:walk strategy for the run leg. I have aspirations for the race, but I know that every race carries with it a big unexpected element (like broken ribs or hypothermia).  So I’m not too hung up on the numbers, and I know that plans don’t always match results.

So instead of borinig you silly with my race strategy, I’ll give you the number one objective – to just go out and enjoy every second.  To do the best that I can on the day. To leave behind the unnecessary pressure I can put on myself in favour of a new attitude.  That new attitude?  Marvel.  To treat the race like the gift that it is. I seriously thought I would not be able to do this weekend’s race back in January when I was told to quit running.  And here I am, ready to line up, feeling fit and strong and as ready as ever.  I now know that I should never take racing for granted.  So I plan to go out there and RELISH every single second of it…

BECAUSE EVERY RACE IS A GIFT.

3 responses to “Every Race Is A Gift”