It is two sleeps until I leave for Austin Texas and the USA Paratriathlon Nationals.  I gotta admit – I am nervous.  And I have been trying to figure out why.  I think it all comes back to the expectations I am lumping onto myself.

I have wanted to do this race ever since I decided to take triathlon a bit more seriously and to make it an integral part of my life.  I have been working hard to figure out ways to improve.  I have tried my best to be satisfied with each second of progress I am making, and not to get too down by the way that my body has responsed (or not) to the new demands I am placing on it.

Yesterday I opened up the race information packet, and turned to the athlete listing.  I just wanted to know my number (144 in case you are wondering) and I wanted to know what time I would start (7:05 am so more or less a lunchtime race if we think about things in UK time).  Yet I found myself scanning the participant listing.

There is another person with CMT doing the race.  I noticed she is classified as a TRI3 triathlete – the Les Autres category – or the natural category for people who have neuromuscular impairments.  I once upon a time thought I was a TRI3 too.  I got excited about being a TRI3.  I looked up the world championship times of TRI3 athletes, and figured I might have a chance of getting to that standard.  So I worked hard.

And then I went to get classified.

Turns out I tested not as TRI3 (the logical category) but as TRI4 – an arm impairment.  My competition can RUN.  And they can run FAST.  Like sub-20 minute 5k FAST.

And my first ever sub-40 minute 5k was in April.

I had really hoped to be in the same wave as the other person with CMT, to be able to see how I fare with others who have the same condition that I do.  But she must have replied that her expected classification was the TRI3 category.

So we won’t be in the same wave…

The system of classification just “is what it is”.  But if the idea of para-sport is to create an environment when athletes who are similarly impaired can compete against one another, I think the triathlon classification system needs a thorough review.

This is when I ran my personal best race 5k—which was 39 minutes 49 seconds.

I classify the same as… 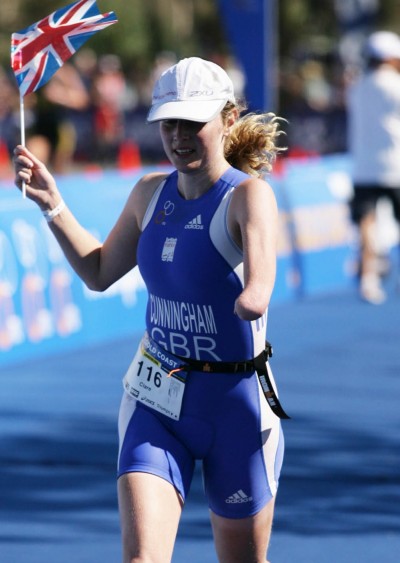 And I also classify that same as…

Hector Picard, a TRI4 arm impaired athlete who ran a 27 minute 24 second 5k at the Egg Hunt (same race where I PRed) in April.

Is it just me or is it somewhat crazy that all three of us are classified that same in paratriathlon?

Draw A Line Under It…

After I got my bike packed away (almost anyway – I still have to pack away the magic tire pump and I am still contemplating whether or not to chuck in a CO2 cartridge) I decided I needed to move on.  I needed to get my focus back to ME and MY RACE.

This race cannot and should not be about any “I wish” or “what if” moment.  This race IS a celebration of where I have come from.  It IS nothing to fear.  It IS everything to embrace.  It IS the chance of a lifetime.  It is something I have dreamed about doing since 2008.

And that is why I am going – TO HAVE MY RACE.

I think magic connected me with Anthony Zahn, one of my CMT heroes.  Anthony has the same neuromuscular disorder as me, and has competed at the Beijing Paralympics taking home bronze.  He must have been reading my tweet stream last night, and he sent me a key message I am going to take with me to Texas.

Kill it in Texas

Yes. Focus on the race.  Go there TO HAVE MY RACE.  Race the best race that I can on the day, no matter what else has happened in the past, or what may happen after, it is all about THAT MOMENT.  THE RACE.  MY RACE.

Just make sure that when you finish you say to yourself there was nothing more you could have done that day. If you do that, it is a success.

Clare Cunningham gave me a great piece of advice I’m also packing away for Texas:

Go it alone if you have to.

My nerves build as I anticipate the start gun, but my head is settling, and I know that I am as race ready as I can be at the moment.

(PS – sometimes I think that racing is such a selfish endeavour. Am I alone in thinking that?)

2 responses to “It will be MY RACE”