Sunday was the start to my 2010 triathlon racing season.  I did the Blenheim Triathlon Sprint distance (750m swim – 20km bike – 5km run). It was my first chance to see how all the training I’ve been doing with Coach T has improved things since last season.  A chance to see how I felt.  To just tri and have fun and enjoy the first challenge of the season…

I had a pretty amazing cracking fun awesome good time!

Probably the coolest part of the day was racking around the same time as the elites were racing.  There is something so awesome about seeing elites race.  We caught the T2 of the male elites and one of their run laps.  Tim Don totally dominated the run.  He flew into T2 and was out quicker than the rest.  Amazing stuff. 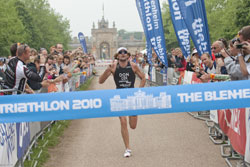 We also saw the women run into T1 and T2, with commentary on their transition performance from the BTF official.  Jodie Stimpson looked on fine form as did Vicky Holland.

Seeing the elites put me into a real race frame of mind.  And there is something magical about Blenheim – having transition right in the middle of the Palace, I don’t know… It kind of made everyone… Happy… Open… Friendly… It was a lovely atmosphere, super supportive, and I would totally consider doing it again for that…

That atmosphere, and my own race, summed into one overall feeling for the day:  sheer joy! 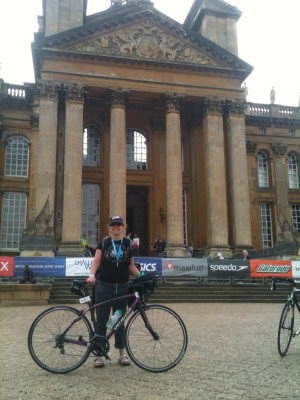 Me post race, with medal, with my trusty steed in front of the palace (in transition)

So, onto the race… My instructions: race at 85% Heart Rate (about 150-160bpm), no goals on the run just run continuously and enjoy it as much as possible.

In previous seasons my heart rate has spike to about 155 pre swim.  Probably nerves and anxiety related, so I was pleased to see that when I jumped in the water my heart rate only hit 135.  I used the jump from the water to the start line to work on relaxing a bit.  Chatted with the folks by me.  And for some reason wound up in the front line, although too much to the right for my liking.

I was well on target I think to crack into the 14 minute bracket if not less.  I was having some difficulty relaxing into my rhythm as I was hitting the swim hard.  But I was getting there.  And then – BAM! A foot or fist to the face, and my goggles were down on my cheeks.  I rolled onto my back, in shock, goggles back on, and composed myself, but I lost the front line and the pacers I had around me.  I struggled to regain my rhythm.

I exited the water in 15 minutes flat.  Before the race I had advice to rip off my wetsuit before starting the climb to transition, so did it right at the water’s edge.  I was pretty disoriented so it didn’t click that I had not stepped over the chip reader when I stripped off.  Then it was a climb up stairs and onto the hill.  I reckon I took a minute and a half from water exit to chip reader, which explains the difference in the time on my watch versus official chipped time.

On Tuesday last week Coach T asked me if I had practiced my transitions.  I laughed.  My transitions by nature are long.  I cannot run barefoot as my ankles are unstable and feet just funny.  But I had practiced ripping off my wetsuit.  I was de-suited in about 20 seconds flat if not less, but then it was the climb to transition.  It was 400m uphill from swim exit to transition entrance.  I had to walk it.  I knew that this would happen, so I decided not to fret.  Then at transition I had to get my feet into compression socks (the only thing that is working well with my ankle-foot orthotics on the run to prevent blistering) which also took time.  I tried not to get frustrated, but it is hard knowing that my “requirements” eat into my total triathlon time.

I was so excited to get onto the bike.  I sprinted out of transition, and now need to work on my mount / dismount as I look a fool to not mount properly!

Riding the course the Monday before helped with my nerves.  I also was curious to see how I would feel.  I felt GREAT.  I sprinted out the transition and down the hill over the bridge, knowing that a hill was right after.  But I was also a bit cautious of the fact the course was narrow and there were loads of triathletes around me – three, four, five across at times.  I took the first lap cautiously, and decided on the second and third I would hit it harder.  Lap two I decided to try to take on board some “food” – my trusty Sport Beans.  Done but I need to find a new solution to eating on the bike – something quicker and easy on my stomach.  Suggestions welcome.  Lap three I decided to hit it as hard as I could.  I reached 50kph on the downhills and LOVED EVERY MINUTE.  I was so sad coming past the spectators knowing that the bike leg was over. It actually ended quicker than I hoped, as there was an athlete down and the marshalls were on the course, ordering people to slow / unclip.

I forgot my race instructions on the bike leg…  I was having too much fun whizzing down the hills and playing with my gear selection on the way back up them.  I think my bike is just AWESOME.  I want to spend more time riding!

Again, I am not going to get upset here about how long my transitions are… That is just the deck of cards I have been dealt.  But something I learned from the BTF race official in transition was that if I use my paratri classification, I can get more space allotted in transition, which will help in putting on my orthotics.  Got me to thinking that there is a point in finalising the classification EVEN IF it is not the ideal class for me…

Run:  a solid continuous run trying to have as much fun as possible

I am not divulging my time on the run – nor my time goal – as there was no goal and time did not matter for this race.  It was just important to see how things felt.  To get around continuously without stopping.  And to have fun.

The run was a stunning two lap course.  Up hills, around the lake, and back again.  The first kilometre was tough, but then I relaxed into it and tried to enjoy the feeling of hills and tried to run them.  In fact I did a slow jog.  But it was continuous.  The only parts where I walked: the ramp up and out of transition, the grass between the bridge and the spectators, and one aid station.  I did max three minutes of walking.  I kept my heart rate at about 165 max/average.

I had a target time in the back of my mind, even though we did not officially set one…  My target was to make sure all three disciplines totalled to a sub-2 hour time, thus excluding transitions from my counting.  I achieved my goal, and although it is nearly impossible to compare courses, this means that across sprint distance triathlons I knocked 10 minutes off my previous best three discipline time.  I also wanted to see how I felt.  I felt – and feel – strong.  Although I have some aches I have no pain – I was really worried about waking up to foot pain this morning, but that did not happen.  This is also a personal first.  Normally I feel wrecked the day after.  Sure, my legs were kind of dreading my stairs today – but once I actually headed downstairs I saw there was no need to worry.

And I wanted to have fun.  I wanted to start the season having a laugh.  I had a cracking good time, and really felt (and still feel) like laughing and shooting “woo hoo” when I think about the bike descents – SO MUCH FUN!

How does this set me up for London in August?  I think pretty well.

I still have a lot of work to do on the run.  But at the end of lap 2 I thought to myself “could I do two more” and I thought “yes, probably I could”…  I think 10km is achievable – but I want to make sure I feel strong and do not walk it.

I also need to figure out how to take nutrition on board when racing.  This has always been an issue for me.  When we did the Rallye des Gazelles I could not really eat during the day or even for a few hours after the day.  As I think I will be racing for about 4 hours in London, I need to figure out how and when to eat and drink to avoid bad performance and bad race feelings.

A special thanks to…

Everyone who sent me messages of encouragement for the day, including…

First Great Western Trains, can you please work on your customer service?  Let’s just say that the way you treat folks with cycles needs a serious attitude readjustment.  Your staff have some serious train/bike rage issues. Can’t we all just be friends and get along? That is all.