“You can’t make plans… you can only have intentions. And a lot of hope.”

The quote above is from Alok Jha, a Guardian and BBC journalist who is currently stuck on the research vessel trapped by ice near the Antarctic. He is talking about how they cope, trapped in the ice, waiting for rescue.  But I think his words are just as applicable to every day life. And they especially resonate with me.

In 2013 for the first time I chose a “word of the year”. Instead of a resolution, I chose a word, a theme to stick with throughout the year.  I think I first heard of the idea via NPR. I thought about my word, and only ever so subtly mentioned it on this blog.  2013 was to be my year of living INTENTLY.

(adverb.)
With earnest and eager attention.

Earnest and eager attention.  I don’t think I could have chosen a better word for 2013, particularly when it came to managing my physical self and sporting endeavours.

With my 5k run to start the new year came a swollen knee.  Nothing that I am unfamiliar with, as I have a history of knee problems and have managed inflammation stemming from running since starting triathlon.  But this felt different.  A visit to the doctor confirmed that my knee was degenerating.  The advice was to rethink my participation in triathlon, and that if I chose to continue through the 2013, that I would need to do so paying a lot of attention to what was happening with my knee.

Ever training session I did I intently searched for signs from my body – was my knee okay?  Months and months of physical therapy had me working on strengthening my glutes to stabilise my knees. I abandoned key aspects of functional body weight training – squats and lunges – to give myself the best chance of having a few more races.

Each day, each session… Done intently.

Finally in mid August I achieved my goal of building back enough strength and stability to complete another Olympic distance triathlon.

And the cumulative effect of 8 months of non-stop attention to my knee, how it felt, how I needed to adjust and work around… It crescendoed.  In September the last thing I felt like doing was anything related to triathlon. I embraced yoga and strength training, and looked to the swimming pool for comfort and healing.  But my body had other ideas. By mid-October I entered into a six week cycle of persistent and nagging colds.  I would ease off training, then go back to it. One week sick, one week better and resuming training. And a cold would again appear, leading me to repeat the cycle. By the end of November I had enough. It was clear to me that I needed to pay earnest and eager attention to healing. Healing my body AND my mind. I was burnt out from so much focus on working around my injuries, on figuring out how to stay active without further complicating an already ugly situation in my knee.

So I backed off exercise, almost completely, punctuating my week with occassional 30 minute exercise sessions. I packed workout kit for my travels, but mostly opted for my bed rather than the gym. And I intently focused on resting my body, re-energising my soul.

For the past week I have been in Florida, surrounded by family, laughing A LOT.  Recharging my batteries. Enjoying barefeet in December. 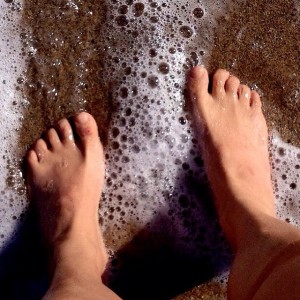 But I remind myself. Taking a break has been VITAL. I needed this time after a draining 2013 – the intense attention I have had to pay to my body to work around issues and to bring myself back to a condition where I could safely complete a triathlon broke my desire. I wanted time off – more than any fitness goal, I wanted to feel rested and healed and happy with the very idea of training again, before I embarked on any new plan or set any new goals.