Forgive me if this doesn’t read like a typical race report.  I am not going to bore you with the details of how long my transitions are (In short: LONG).  I’m not going to bore you to death with my pace per kilometre stats.  Do you really want to read a blow by blow?  No.  Probably not.  Instead, this post is about what I learned about myself since January via triathlon.

On January 1st, I ran 5k to ring in the New Year.  And my knee swelled up like a balloon.  It stayed swollen for three weeks and it wasn’t coming right.  I bowed down to common sense and visited an orthopaedic doctor, had some imaging done, and was given the verdict: “The structure of your knee means that every time you load it, you are causing it to degrade. Stop running and stop bootcamp immediately – focus on swimming and at most light cycling, and be happy.”

Yesterday, on August 18th, I completed an Olympic distance triathlon.  My first one since 2011. *big smile* 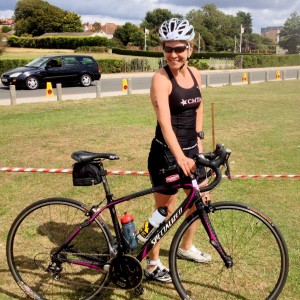 I always take time to smile when I race. This was on my entry into T2. DH said “smile”, so I stopped and posed. What is an extra 10 seconds when you are not racing to win?!

When you confront and then decide to manage serious issues, it is a big wake up call.  Suddenly, you have to learn – painfully and the hard way – that self worth CANNOT be defined by numbers that you see.  Self worth has to come from within.  It is about who you ARE, not about what you DO.

It has been a hard lesson for me in many ways.  Facing the “I wish I could…” and “Why can’t I do…” monsters is tough. Especially with the decision to do a sport that is so defined by numbers.  What your 100m pace is.  How many watts you can push on the bike.  Your pace per kilometre.  Your miles per week.  You name it, data is everywhere.  But for someone with persistent injuries, with a body that rebels against loading and pushing too hard?  Numbers are the path to a dead end, they are anything but answers.

Armed with knowledge, I realised I could never go back to blissful ignorance, that I’d have to stop minimising problems that I knew in my heart of hearts have existed for a very long time.  I had to realise that I am not defined by my participation in triathlon, that the numbers do not make me a better or worse person. I’ve had to remind myself – and hammer the point home all year long – that I am doing triathlon and living an active healthy lifestyle to BE my best me.  That the sport is helping me to explore commitment and discipline, to set and then relentlessly pursue personal goals, to identify what really matters to me.  That the sport is simply a vehicle, and EXPRESSION, of who I AM, not what I am WORTH.

I had one goal yesterday – and that goal was to complete the distance.  I threw time goals out the window when I signed up for the Harwich Triathlon.  After my mechanical DNF at the London Triathlon I just wanted to FINISH a race.  I wanted to prove to myself that I was ABLE to finish.  That my body was CAPABLE.  That I had managed myself back from the edge.  That I was able to work with me – no matter what curve balls had been thrown my way.  I wanted to find peace in this race.  And I wanted to get the doubting monkey off my back. 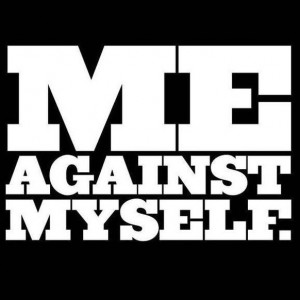 I was incredibly nervous pre-race.  Every little thing was triggering me.  Would the sea be too cold?  Would a big lorry drive past me and its breeze knock me off my bike?  Would it hurt to run off the bike?  But as always in a race, what makes you nervous before the start is never what happens when you are out there.

The sea… I was worried about swimming in cold water, about the sting on my face, about losing feeling in my hands, about calf cramps in reaction to the cold.  But the sea was cool, refreshing, lovely – not too cold at all.  This was my first time ever swimming in the North Sea, but I was not scared.  Who knew that my sighting would let me down?  When you are told to swim to the lighthouse, it is a real problem if the swell means that you can’t actually see the lighthouse.  I felt blind and disoriented, but not once did I worry that I would not finish the swim.  A navigational detour which set me on course to The Netherlands was not in my plans, but no matter.  I am thrilled to have finally swum in the North Sea. 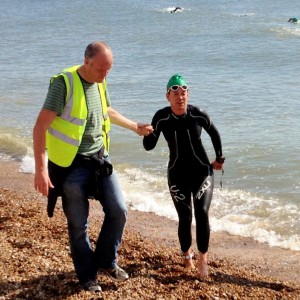 Getting a hand from the awesome volunteers at the Harwich Triathlon swim exit. Such amazing support!

I was worried about cycling alongside traffic on unfamiliar roads.  I had no idea about the course profile, no strategy for riding because I didn’t know what would come next – I had never even heard of Dovercourt until July 29th when I found the race online.  I decided to just to ride like I had done on the turbo trainer, by feel and by constantly telling myself to push my legs just a little bit more.  Who knew that it would be windy, that for the first 20 km I would have to work so hard for numbers that were so low?  Validation – this race WAS NOT about the numbers.  Instead it was about riding strong, about working hard and showing myself that I could push myself, about getting uncomfortable yet remaining confident.

And the run… It is hard to talk about running when I know it is not my thing, that it is the part of triathlon that is definitely not good for me.  But I had a strategy – a plan.  2 minutes running, 1 minute walking.  An overall loading factor on my legs of about 70%, similar to what I have been training with on the anti-gravity treadmill.  I felt confident the strategy would not trigger the return of persistent and unmanageable inflammation in my knee.  I felt great for the first 3km of the run, and then things got tough.  But I held onto my strategy, and knew that I would finish.  And that was what the day was about – FINISHING.

I focused on the gorgeous day as I ran-walked around Dovercourt Bay.  I marvelled in the absolutely perfect weather.  I took in the scenery – row upon row of British beach huts, brightly painted, lining the promenade.  I chatted with course volunteers, joked with the public. When your goal is simply to DO AND COMPLETE, the day, even the tough parts, become enjoyable.  My heart was light. 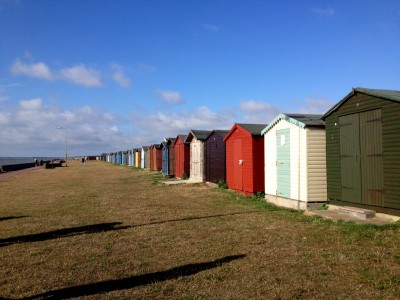 I spotted my friend Amy on the last lap of the run, and she joined me for the final stretch.  DH was waiting for me with a big hug.  I got a high five from the cutest little spectator on the course – 1 year old William.  And my worries about whether or not my body was capable of doing another triathlon?  All those months of hard work and patience?  Vanished, replaced with a deep sense of achievement.  I was happy, I did not want any more or any less than what I had done on the day.  The monkey was off my back.

There are things I’d like to work on, and sure the numbers will offer some lessons and guidance for the future.  But the numbers – my times, my heart rate, my watts – these are not the measure of my success yesterday.  Quite simply, finishing this race was mission accomplished.  It was a celebration of my ability.  It was a physical expression of the patience, dedication and kindness I have shown to myself in 2013.

Special thanks to my triathlon coach Russell Cox, my running coach James Dunne, my sports doctor Jon Houghton, my physiotherapist Ellis Taylor, and to Balance Physiotherapy and their great facilities—without everyone’s guidance and support over the last months, I would not have realised that (for me) triathlon is just an expression of who I am and not the definition.