In March of last year we eliminated gluten from our home.  After years of telling me that he thought he had problems with wheat, I made the decision to “do a two week experiment” when I was away on a business trip, after chatting with an old friend on Facebook.  We decided to go completely gluten free for a period of time, to see what the impact would be on our general health.  Would pesky stomach problems disappear?  Would we feel less fatigue?  These are the common things reported when people give up wheat.  Most people seem to say that four week of elimination is necessary to feel any impacts – we set the bar at two weeks.  It just seemed more “do-able”…

Two weeks became four weeks.  We did a few experiments with gluten and wheat to see what would happen.  For me, not much.  For DH, each experiment confirmed his desire to be a gluten free eater.  Which he has been for a year now.

What happens when I eat wheat?  Not much honestly – I get a rumbling stomach, I have somewhat “heavier” feelings, and I’ll spare you explicit details on changes to my digestive process (unless you want to email me in which case I am happy to share) – but the changes are not major, just noticeable now that I know what triggers them.  For DH, gluten-free eating has been a huge and positive change.  His coughing cleared up, his stomach is improved, he dropped a lot of bloating around his mid-section.  Now when he has wheat he can tell almost instantly – he gets blocked sinuses, feels flu-y, has stomach troubles.

I must say again – going wheat free and gluten free should not be seen as a way to lose weight.  It is a choice that – in my opinion – should be driven by health concerns.  And eating gluten free does not mean healthy.  A lot of the substitute products are made with alternative starches – like cornstarch and tapioca – which don’t exactly top the table when it comes to bang for the nutrition buck…

For the last year I have been trying to understand why it is that DH has benefitted so much from gluten elimination – what exactly has triggered this intolerance.  I bought the book Wheat Belly in my quest to understand more of what wheat actually does to the body. 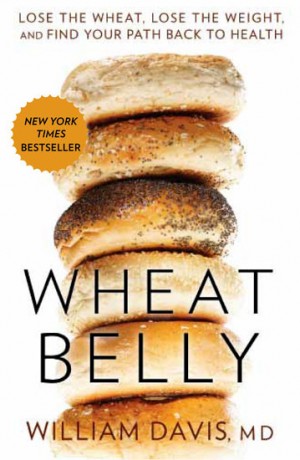 I picked up wheat belly to learn more about the ills that wheat can cause.  I suspect I am not the target audience – which seems to be those who want to lose weight through one simple action – eliminating wheat. I am not into “diets” per se, just healthy eating and trying to understand as best as I can how what I eat impacts my body. And I definitely don’t believe that going gluten free should be done by those solely in search of weight loss – it is a choice to make based on health reasons.

But that said, the author William Davis goes into great details about the evils of wheat.  From having a high glycemic index (a measure of the way blood sugar increases 90 minutes after consuming food thus stimulating insulin production, wheat is shown to have a higher index than table sugar!) to being full of unresearched unnatural protein structures, the argument laid out is that wheat should be avoided.

I enjoyed the first part of the book the most – where simple facts and the history of wheat was layed out for the reader.  Little things like “wheat represents 20% of all calories consumed globally” caught my eye and piqued my interest.  I also liked it when Davis delved into the history of wheat and the development of high yield species.  I had no idea that the wheat grown today was developed in the period of time from the 1950 to 1970s as a means of increasing crop yield and combatting global hunger.  I loved studying about genetics in high school so enjoyed reading about the development of dwarf wheat in world agriculture.  And I also appreciated the call to caution raised by David that such rapid change without research may have unintended consequences.

The description of the molecular structure of wheat and how our bodies process was interesting to me – it stimulated my inner science geek.  I liked the explanation of what “cholesterol” is and the difference between HDL and LDL and triglycerides—sure I had seen them on blood test results, but here was an explanation that was able to be understood by a non-scientist.  I had to read these sections a few times, as they are science dense, but I still valued the information and explanations.

Where I found Wheat Belly lacking is that in essence, Davis ends the book by promoting a “no sugar no grain” diet.  Typical.  Do all bestselling books about nutrition involve a diet prescription?  Rather than an exploration of science and the food industry, we end with recipes, an eating plan, and a no starchy carb lifestyle.  Which frankly if I had wanted that I could have just gone online to read the latest greatest “diet” info floating around.

Would I buy it?

After reading this review by Yoni Freedhoff on Weighty Matters, maybe not.  The links in Freedhoff’s review basically blow Davis’ arguments out of the water.  Including the parts of the book I enjoyed.  Sigh.

Do I regret my purchase?

Absoltuely not.  I can always handle a few new recipe ideas (even though I would not deliberately buy the book for those).  Even if the medical claims made about wheat in the book are not entirely credible, the explanation of cholesterol is true and something I am happy to have on my shelf as a reference.

What about you?  Have you read Wheat Belly?  What did you think about it?  Have you gone gluten free as a result of reading it, or grain and sugar free?