After the London Triathlon was over I felt beaten, quite literally. I was hurt, both my ego and my body.  I couldn’t handle thinking about the race.  I told my husband to stop talking about his race, his finish, his success on the run course.  I just couldn’t handle it.  I felt like such a failure for turning in my chip, for my first DNF.  My heart hurt – it literally ached – from the hypothermia.

David turned to me and said: “You know, you could’ve finished this race.  But then we would have wound up at the hospital.” 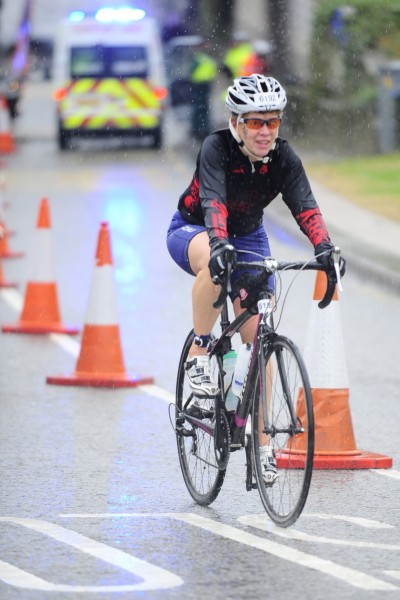 I chose to stop.  To stop before I hated what I was doing.

Hypothermia is no joke.  I know a lot of people just assumed I called it quits because I couldn’t handle the weather anymore, that I retired and got a cup of tea and – oh well – I just didn’t finish.  I wish it was so EASY.

For me, my hands stopped functioning.  I could not move my thumbs – the nerves and muscles would not respond, they would not move.

With hypothermia, the heart rate starts to get strange.  It beats high, then slows down.  It becomes erratic.

And my heart?  I knew I was getting hypothermia on my third climb of Limehouse Link when my heart rate did not rise on the climb.  By the time I got on the run, my chest literally ached. A type of ache I’ve never felt before. It was terrifying.

With hypothermia, the body starts to shiver.  The body involuntarily does anything to get warm.

I started shivering on the run course.  I think running through the “water feature” or flooded section, soaking my shoes, socks, and orthotics, was the trigger, the final straw.  That was when my chest aching started too.

When I stopped at the aid station to take some endurolyte tablets, and my hands wouldn’t work and my shoulders were shaking in the rain, the aid station worker looked at me and said “Are you sure you are okay?”  That was my trigger.  He was the third person to question me during my race.  The first was Richard, the BTF race director who looked at me and said “no one is making you finish this race” and I laughed and said “except for me”.  The second was Mandy, who I know from Gamesmaker volunteering at the London Olympics who was volunteering in the run out transition area, who held my hands at run out, felt how cold I was and said “Maybe the run will warm you up, but if it doesn’t, come back.”  And then that aid station volunteer.

What did I have to prove to myself?  Not one thing.  I know I can race broken.  I did that in May.  I raced with fractured ribs and ended the race doubled over, in pain.

I didn’t need to prove anything to myself.  So what was I racing for?

I lined up because I love racing and triathlon.  And I wanted to equal or better my time from last year.

But it just wasn’t going to happen this year.  NOT then.  NOT frozen.  NOT when my body was clearly shutting down.

So I stopped.  I turned in my chip and ended my 2012 season cold, wet and dejected.

I shivered for 4 hours.  I cried.  I was so frustrated it ended that way.

I stood under a hot shower to warm up, dried off and layered up in wool, with wool boot socks and Ugg boots.  I had hot soup and camomile tea.  I tried to warm up from the inside out and the outside in.  I burrowed under blankets.  And finally, at about 2am after my season had ended about 12 hours earlier, I was on fire.  My muscles had finally relaxed, my temperature was finally coming back to normal, and I was BURNING UP.  I swear if I had eggs I could have fried them on my hands.  I felt like I was radiating heat.  A quick google search revealed that this is one of the things that comes with hypothermia – either you get warm so that your muscles finally relax, or you are so frozen that your muscles finally give up, and either way you feel on fire.  It is one of the reasons why hypothermic homeless are often found naked on the streets in the winter time.  Thank goodness I was home in my bed.

Last Monday I felt like I had been beaten. Sore everywhere.  My body temperature was still all over the place, as I fluctuated from feeling hot to feeling cold.  I was out of town for work all last week, and spent the days feeling exhausted and the nights unable to sleep. The aftermath of hypothermia?  It felt like recovery from a very bad flu.

Nobody ever tells you just how awful you feel – physically – from hypothermia.  It’s just some word you hear, something you see on shows like ER, and something many people think is just an excuse for not finishing when the weather became unbearable.

I think it took me all last week to realise that I did the right thing.  I avoided the hospital.  And – in a strange way – I also preserved the joy I get from triathlon.

I think if I had finished I may well be writing today that I would never race again, that I would never do it to myself again.  But I didn’t finish.  And I have finally stopped licking my wounded ego and now know that everything I felt and experienced – it was my body’s reaction to the weather.  Something I really couldn’t predict, or help.  I trained in the cold.  It wasn’t that.  It was RACING in the cold.  Now I know.  I won’t be racing in 14C water followed by cycling in 10C rainy windy weather again.  At least not for a distance longer than a Sprint.

I spent last week Monday through Friday taking a break from all things triathlon.  I ate what was on offer. I enjoyed wine.  I met up with old friends, celebrated birthdays, and met a long-time friend from Twitter.  I shied away from activity, only venturing into the swimming pool on Saturday.  And even then, when I got into the water, I whimpered that “I didn’t want to feel cold…”

I tried to plot out what comes next.  And I discovered that, right now, I just don’t know what it will be, at least when it comes to my 2013 races.

I do know that it is time for some changes.  Some new approaches.  And a return to some things that worked well for me in the past.

It is time to draw a line under 2012, and to move forward knowing that I saved myself – and my joy – when I didn’t finish London on the 23rd.

Here’s to October… And new beginnings…

2 responses to “My London Triathlon (part 2) – Onto New Beginnings”