This is going to be my last post in my Living The Games series for a bit.  I plan to write a few more in September, to coincide with the Paralympics and also hopefully to share a few more thoughts on aspects of the games I haven’t touched on… (I know, right? It is hard to believe after 14 posts that I would have left a stone unturned!) 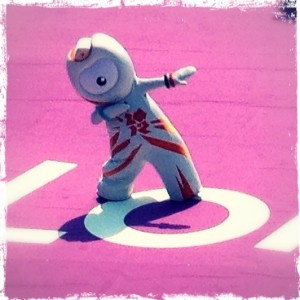 In addition to volunteering at the road cycling and triathlon races, I also had the chance to get to four different venues to see some of the sports from a spectators point of view.  We were really lucky in that we were able to get tickets through the ballot, we also bought later released tickets, and finally we had an invitation for an evening of athletics.  Each event left me with different thoughts and feelings, and I feel really lucky to have seen four events as well as working on two courses.

I gotta say, when it comes to venues my favourite (that I went to) was Hyde Park.  I don’t think this was down to bias.

I realise I saw more of Hyde Park due to being a part of the triathlon team.  I met there for each of my volunteering shifts (so 5 early morning starts at Hyde Park, including some pre-sunrise walks through the park which were serene and beautiful).  I had a complete tour of the facilities.  I probably felt closer to that venue than the others (if it is even possible to feel close to a venue!).

Honestly, I think I loved the park as a venue because it was just so integrated within the city.  It looked amazing, green, well kept.  And it was so cool to have the events right in the heart of London.

We went and spectating at the women’s marathon swim.  We had been hoping to see a Team GB gold from Kerrianne Payne, and although that didn’t materialise the race was absolutely incredible to watch.  I know what you’re thinking – how can two hours of swimming be fun to watch?  Maybe it is because we’ve both swum in the Serpentine Lake before, or maybe because we both have done 5k swims before (and me a 7k swim) but DH and I loved the lap format.  Also there was entertainment.  There were dance acts, interviews, and screens to watch the action (a boat trailed the swimmers around their loops providing live feed). 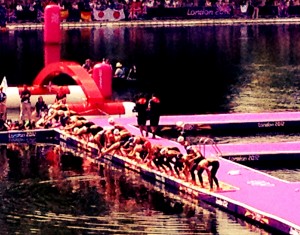 The finish was jaw dropping.  After leading for most of the swim, Eva Risztov barely held on to win gold when US swimmer Hayley Anderson surged in the last 400m.  Anderson swam sub 1 minute 100m splits AFTER she had swum 9.6 kilometers.  It was INCREDIBLE.

We purchased diving tickets when they became available because we wanted to see the aquatic center.  Neither of us knew much about diving, except that 10 meters was a long way up.  I think we figured out that both of us had jumped off a 10 meter platform before, but that neither of us would do it again! 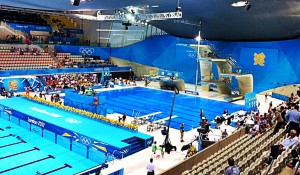 The presenting team at the venue did a great job of teaching the crowd about the sport, as well as broadcasting replays to make sure that we saw each thing in a dive.  We were in awe of how the divers were able to fit so much into a short period of time between platform and pool.

My favourite memory from diving has to be the medal ceremony.  We happened to have the silver medalists family come to our section just before the ceremony, and the Brobens were SO PROUD.  I loved seeing the mother tear up.  I mean, Brittany was just 16, taking time out of school to do the Olympics.  Their excitement was infectious.  Even the Chinese fans (China took gold) were lining up to take photos with Brittany’s mom.  She really did rival Chad’s Dad (didn’t get the television time though!)

I looked at going to the football as a chance to finally go to Wembley (I had been to the arena but not the stadium).  It did not disappoint.

But I gotta say, this event… Well it left me a bit cool.  Maybe it’s because of the typical “football fan” crowd that it attracted.  Across my volunteer shifts and previous days of spectating at events I came across NOT ONE person whose rudeness could not be defused.  Except at Wembley.  Just in front of me a RUDE FAN sat.  I shifted in my seat and he had the audacity to turn around and ask me not to move around as it was disturbing him.  I mean, come on.  It’s a football match.  At a stadium.  In close quarters.  And there was no need to get rude about it.  I was minded to give him a piece of my mind, and then DH leaned in and said “remember, this is a football match – people aren’t always nice at football, leave it be.”  And so I did. 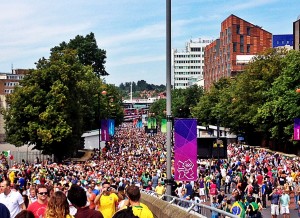 There were a lot of people at the stadium.  Maybe that was it.  86,000 fans to see the finals.  The buzz was extraordinary.  And it was great to see Mexico win.

The Stadium and Athletics

We were fortunate enough to be invited to the athletics on the last Friday of the Olympics.  That was the night of the men’s 4×400, the women’s 4×100, the women’s 5k, and so many other events and heats.

I was super excited about this evening.  First, it enabled me to bust out my American flag.  Yep.  I was *that* American fan.  It is not often we get to show this type of national pride living in London! (Although I did get to fly my flag for our street’s Jubilee celebrations in June…) 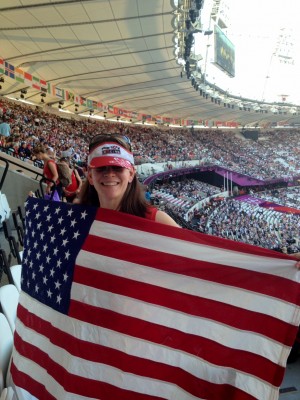 It was amazing to be able to see the US women smash the 4×100 record.  DH took this photo as they walked their victory lap after the race.  This is not a split screen – it is the railing where we were seated.  We had an amazing view of the track, right by the finish line. 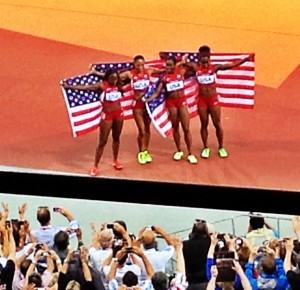 Although I had my American flag, I am not one of those people who support only Team USA.  I support great athletes, no matter their nationality.  So I was super excited to see Tirunesh Dibaba from Ethiopia go for the double in the women’s 5k (she had won the women’s 10k earlier in the week).  Sadly, she couldn’t last in the home stretch and slipped back to bronze.  But it was incredible to see her race (she is from Bekoji, the town that is the focus of the incredible film Town of Runners that I saw earlier this year). 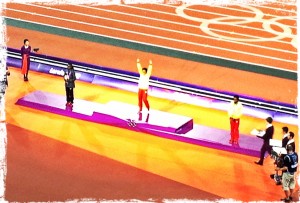 The most impressive race from a sheer crowd engagement perspective was the men’s 4 x 400.  The US was the favourite to win, and it was SO CLOSE with the Bahamas.  The crowd absolutely ROARED during this race.  A wall of noise.  That noise made me think that the modern Olympics probably had the same atmosphere as the Roman Colosseum.  A real bread and circuses atmosphere, which was also kind of a strange thing to experience.  But my favourite part of the 4×400 was not the battle between first and second place – it was seeing Team South Africa participate.

Although Pistorius came in last, the fact that he was there, running with the best of the best, was incredible.  A testament to his character, determination and persistance.  But what struck me the most is that after the athletics finished and we were having a drink, I said to one of the guys that I was with “How amazing was that to see Oscar Pistorius run.”  He replied “to be honest I didn’t even notice it was him – wasn’t it a thrilling race?!”  What a statement, simply for the fact that being a blade runner just did not stick out in this person’s mind.  Oscar was just the best among the best.  Nothing more or less.  Awesome.