It is all about the Olympics for us at the moment.  Us and about 1 billion other people in the world!

The one thing that I’m finding the most disturbing – at least from a sleep perspective on those days when I am actually able to “sleep in” – is the helicopter sound.  From about 5:30 in the morning the choppers start their low flight patterns over east London, to get shots of the stadium for the morning news.  Meaning they fly over my neighbourhood.  Nice and early.

It is like London is under siege – a media siege.  It’s all kind of surreal. 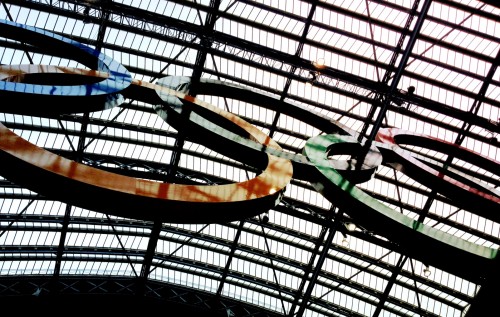 This photo of the Olympic rings was taken at St Pancras International Station, on the Eurostar tracks.  Although I may be tired – thanks to the combination of helicopter disturbed sleep and early starts – I don’t think you can ever get tired of seeing the rings around London…