On Saturday I had the opportunity to head over to 1948 London to see a screening of Town of Runners, the new documentary directed by Jerry Rothwell and released in the UK on the 20th of April (yep – Saturday – I attended one of the first screenings!)  If you follow me on Twitter you will know that I tweeted 6 quotes from the film, to give a flavour of it.  It was phenomenal, on so many levels.  And so was the screening.  Afternoons like Saturday are one of the reasons why I just freaking love living in London – wander down the street, disappear into a hidden gem, be surrounded by cool people from all walks of life who share one thing in common (well two I suppose – a love of great film and running), have a Q&A session with a living legend, and then just walk back home like it was nothing out of the ordinary.  Except it was.  Town of Runners is a film so moving, that gets you thinking on so many levels – it is absolutely extraordinary and so worth watching.

For the one of you who decided to send me a tweet saying that I had ruined the film – please don’t read this blog post.  It is a film review *smiles*  And unlike the reviewers for The Guardian and The Financial Times, I can wholeheartedly recommend it to anyone looking for a cold hard look into life in Ethiopia, sport, and the desire to win.

What is the town of runners?  The film explores life in Ethiopia through the lens of the town which produced some of its greatest runners – Bekoji.  Runners from Bekoji Ethiopia have won 8 Olympic gold medals, broken 10 world records, and won 32 world championships.  It’s the home of Dirartu Tulu and Tirunesh Dibaba.

The film begins in 2008, with the town gathered around the screen watching the Olympics 5000m finals.  In a scene that brings to mind the images from the successful London 2012 Olympic bidding package, we see a whole town – a whole country – pulling for the success of its athletes, and the young of the village inspired by that same success to work hard and achieve. And the story follows the development of two young female athletes over the course of three years.  Through the focus on Hawii Megersa and Alemi Tsegaye, their coach Sentayehu Eshetu, and narrator Biruk, we see how running offers the prospect of transformation, and we see transformation through the development of Ethiopia.

Since attending the University of Maryland and becoming friends with Samson when we worked together to bring Aster Aweke to perform on campus, I have dreamed of visiting Ethiopia.  I suspect the energy and vibrancy I experienced during Aweke’s performance on campus can only be felt IN PERSON – I cannot explain it, but that night at the Stamp Student Union was JOYOUS.  And, now that I am digressing, let’s not forget about Ethiopian food – the spongy injera and stews, a spicy dabo awazi with crusty bread to demolish the paste… My mouth is watering with food memories from Washington DC (the largest Ethiopian community globally outside of Ethiopia).  The film is a stunning visual introduction to the country and its people.  True – it is a depiction of conditions I cannot even imagine, working hours in fields, where one’s well being is totally dependent on climate and weather, where hopes are pinned on athletics and education.  But it spoke to me, reinforced my long standing wish to visit, TO EXPERIENCE THE BEAUTY IN PERSON.

There are a few backstories in the film (perhaps not so in the background).  The first and probably the key one is touches on the conveyor belt of athlete production.  This is true in every country, but in the context of Ethiopia we see how an athlete’s winnings in a major meet can be so significant in comparison to national wages that the state focuses on supporting and producing top athletes, with their clubs taking a share of the winnings, to (allegedly) put back into sport and the community.  I was personally struck by a scene in which the runners from Bekoji were to travel to a regional meet and received the equivalent of a $7 stipend to cover their attendance.  $7.  Seen in comparison with prize purses of thousands of dollars, it is easy to see how a successful athlete can become a revenue generator for a village.

And there is the story of the role of China in developing economies.  Although not explored, we do know that the Chinese are there, in the background, building a road to Bekoji.  Why are they there?  What do they seek?  None of this is answered – but the door is opened, the viewer can explore further the role of China in Africa.  In his tweetstream director Jerry Rothwell posted this link for people wishing to learn more about the subject.  Chinese investments in resource economies is a subject that I have read about in a work context – the impact of these investments on a community, although not explicitly the subject of the film, left me with a lot to think about.

I won’t spoil the main story, but it completely sucked me in.  I loved following the two young women over the years – and I loved watching the Coach in action and seeing his humour.  Here are some quotes that show the spirit, humour, and dedication which the director puts forth.

“There is nothing else, only education and running.”

“You have to work hard for it. You just can’t give up.”

“If you don’t get to the roots it will be the same again tomorrow. And what’s the point in that?”

“Dreams depend on hard work and good luck.”

“Put down that mobile phone. How are you going to train?”

The film ends with a screen shot of a quote by Edwin Moses, Olympic 400m hurdler and champion from the 1976 and 1984 Games.

“When I was in school I used to lose a lot, but I didn’t think of it as LOSING. I thought of it as PREPARING.”

Thanks to 1948 London and Run Dem Crew

Thanks to the energy and passion of the 1948 team and Run Dem Crew founder Charlie Dark, I was able to see not only a screening of the film, but also was able to be a part of a Q&A session with Coach Sentayehu and the film’s producer Dan Demissie. 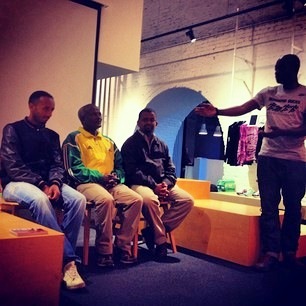 In the film we see Coach full of humour but humble – I would say that he came across the same way in person.  I was completely star struck – what made this man tick?  How did he find so many athletes?  How does he know who will be not only a good runner, but a great runner.

Of course!  We all laughed.  It was truly humbling to be able to listen to the Coach, on his first trip to London.

It was also inspiring to listen to Dan Demissie, the producer of the film.  One of Dan’s aims is to create and enhance running conditions in Bekoji and to do so he has linked up with Running Across Borders . You know I am completely and totally a huge supporter of sport and its links with charity fundraising, so with this link to such a great project I couldn’t help but fall more in love with the film.  Running Across Borders is currently seeking to raise funds to improve the track in Bekoji, which is estimated to cost about £10,000, and also to fund two assistant coaches to work with Coach Sentayehu, estimated to cost £2500.  And of course there is the athletic kit – there is no price differential for athletic kit bought in Ethiopia versus the rest of the world, so donations of kit for runners is also welcome.  Dan suggested coordinating any efforts through contacting RAB, to make sure that Coach receives the kit and donations through the proper channels.

And as I mentioned yesterday, it was such a great crowd of people.  Thanks to Run Dem Crew for making this happen. 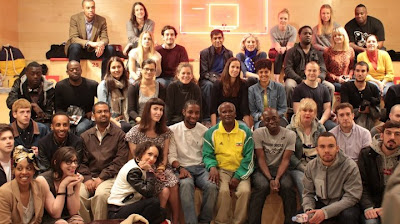