Today marked my final appointment at the London Chest Hospital since I contracted some chest thing last January.  I *finally* got the all clear.

Yes, since January 2011 I have been working my way through “some chest thing” that I caught in Beijing.  I knew something wasn’t quite right after my trip.  I had a pesky cough, but I often get a cough when flying long haul, so I thought nothing of it.  Having landed Friday evening, on Saturday I went to yoga as usual, and woke up on Sunday with a very sore lower back.  I thought I had overstretched in yoga.  But by the time that Sunday evening rolled around, I felt the same way that I did when I was about 14 and had contracted walking pneumonia.  I was SICK.  I waited a good week for my “cold” to pass, and knew something was wrong when it hadn’t.  A trip to the steam room at my gym wound up with me feeling like my lower lungs were bubbling (yuck – was that too much information?) and a confirmation that I needed to go to a doctor.

Anyway, to cut a long story short, turns out that I had “some chest thing” that reduced my lung capacity to about 50%. Yes, I was that sick.  I took strong antibiotics (I do not recommend Cyprofloxacin for the record – so strong!), steroids (yikes! I was even asked if I needed an “in competition” note for taking some of the stuff I was prescribed), and I started feeling better by early April after about five trips to the GP.

In late June, after I completed both the MS150 as well as the Great Chesapeake Bay Swim, I *finally* had an appointment at the London Chest Hospital to see a specialist.  By this time I was feeling good, although after heavy triathlon training I still had a weird wheeze that surfaced.  A wheeze I had never had before.

Frankly the appointment was scary.  I had a Respiratory Function Test, which looked at things like lung capacity, flow rates, and also gas absorption.  My lung capacity was okay, and improved when using an inhaler.  My flow rates were low, indicating a lack of power in exhalation.  And my gas absorption (oxygen transfer rate) was lower than expected – about 69% of the normal.  I had a young doctor who sent me for urgent testing including CT scans of my chest, and told me that this could be a sign of things like autoimmune disorders, and lots of other things that when you turn into Doctor Google and look up online, well, trust me when I say that playing Doctor Google can lead to sleepless nights…

As I was on an urgent track, I had a follow up appointment after my scans in early July.  I saw a very experienced pulmonary specialist who took one look at things and declared that I was probably born with reduced capacity, it was not a big deal, that I did not have lupus, and that I was fine.  Phew.  But I still was not given the “all clear”.  The very experienced pulmonary specialist advised one last follow up appointment, to see how things looked after a few more months of healing and recovery from “some chest thing”, so we could repeat the respiratory function tests and settle on a final course of action.

That follow up appointment was today.  My lung capacity tests once again showed a slight improvement from using an inhaler.  My power of exhalation still showed on the low side.  And my gas absorption functions had improved with time – from 69% to 82% – in the normal range!

When I asked the doctor what it all meant, he said “you are done here” and gave me the all clear – with a little diagnosis on the side.  It seems “some chest thing” brought to the surface an underlying tendency of asthma.  So with my sign out from the hospital, I also left with a permanent prescription for inhalers, and instructions to continue to use them “for now” to ensure that I clear up and continue to improve my lung function (yes! continue the trend to 100% of expected oxygen transfer!).

I have to admit I never ever contemplated getting a diagnosis of asthma.  In sheer layman’s terms, the doctor said that all the diagnosis means is that I am having inflammation in my lungs, which chances are I have always had as I get hayfever.  He said my results and my experience show that the asthma does not impact my life, does not impact my ability to do sport, but that it was likely “triggered and made worse” by “some chest thing”.  Although I am, for all intents and purposes, better, I will be using inhalers for a while – to make sure I have clear lungs for all the things I want to do in 2012.

Now, as for clear lungs…  I have never had a CT scan before, let alone a CT scan of my chest.  The scans are COOL and bring out the inner science geek in me.  I thought I’d share a photo of my clear lungs and fine heart, as evidenced by the miracles of modern technology 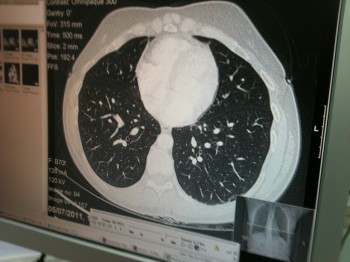 One response to “All Clear, Breathe Easy”