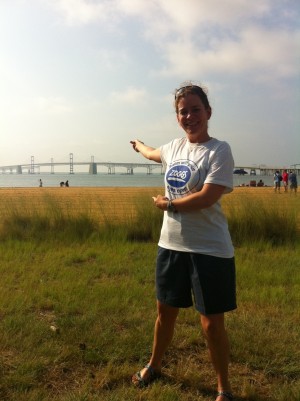 Not once did I ever fear the swim, think that I could not do the swim, or dream that success would elude me.

Call it blind confidence. And thank god I had that going for me, because the Great Chesapeake Bay Swim was harder than I had ever imagined a swim could be… In fact, it is right up there with the hardest things I have ever done.

I stood on the shore waiting for the start. It was hot. We watched a fellow swimmer, born without arms or legs, start the swim. Cheered. I so wanted to do a cheer of “Oggie Oggie Oggie” like at the start of the London and Blenheim triathlons. Nothing. I turned to those next to me, shook hands, and wished them luck. I noticed I was the only one doing this – was this another British tradition? I decided to hold back from the washing machine start, all arms and legs. I was going to walk in, calmly, and do my own swim. And enjoy every moment. I was doing the swim because I could, and I wanted to remember each and every second – the good and the bad.

I felt no pressure at all. Although I was a little paranoid about a few things, and my paranoia grew over the course of the swim.

I was not going to DNF this swim. No. Way. I had to finish so Andi would do her first tri.

The first mile was a dream. So easy. Into the bridge, and at about a mile in I stopped and floated and marvelled at my surroundings.

Sometime after that, the swim started to get hard. Wasn’t this supposed to be the easiest conditions ever? The sudden the right span loomed. I fought, panicked. No way was I going under that span. I found myself swimming nearly perpendicular. My sighting was no longer to a bridge pylon on the horizon – it was to the pylon right next to me. I pulled and grabbed the water. I fought for I swear 30 minutes to get 100 meters. I clawed myself out of the current and tide.

The snack boat. Relief. I pulled up to get a sip of water, regain my composure. But I felt sick. Seasick sick. No way. Nausea on a swim? What was that about? It felt better to swim. Suck it up and swim to the snack boat at mile 3.

And then, sometime en route to mile 3, the current broke. It became easy again. Long smooth strokes, a pleasure. But I knew I needed to eat. And I wished I had an electrolyte tablet. And water.

Hanging off a Whaler I ate a Hammergel. Stretched my calves. And enjoyed the moment. 3 miles. I had this. No problem. A mile and a half was not an issue.

But then, somewhere between mile 3 and 4, I became disoriented. Where was I sighting to? All the pylons looked the same. Aim for the rockpile. But there were kayaks all over – why were they all over? What was happening. I thought of my dad, the man we call Fish. I was Fish’s daughter, therefore I too was a fish. Swim like a fish. Was that Fish on the rockpile, watching me? It was simply surreal. Disorientating. Hallucinations. How long had I been swimming?

And finally, the 4 mile buoy and turnout loomed. I got the hell out of the bridge, and ducked into the calm of the last half mile. I could stand, it was shallow, so I stood up. And I said very loudly “Fucking Amazing.” Because it was. I just swam across the Chesapeake Bay, under the Bridge. Holy. Shit.

I savoured that moment. And then I saw the sun disappear. And I thought “Damn a sandwich would taste good right now.” So I swam with confidence and long strokes to shore.

It was confusing. I exited the water to yells of “Hurry Up! Cross the matt. They are calling the swim!”

There had been a heavy storm warning. So they pulled the swimmers out of the water. My happiness was replaced with relief. I was relieved that my lollygagging and savouring of every moment didn’t cause me to DNF.

I did it. I swam the bay. I finished before something else could have finished my swim.

Thank god. It was a good day for a swim. 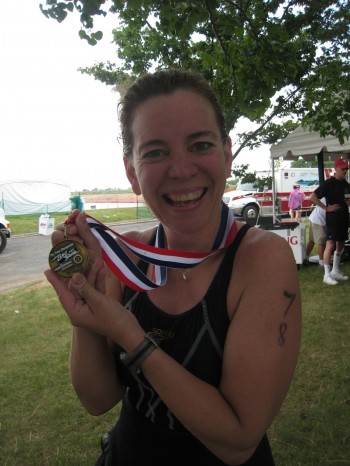