On Thursday I posted my goals for the Swimathon: think tall and long in the water; have fun; and get as close to 1 hour 40 minutes as I could.

Why is it when you sign up for something you think an early start will be great, no big deal? And then when the alarm goes off it seems like the worst idea ever?

The alarm went off at 5:30 in the morning and I thought “what was I thinking?!”—I am not a morning swimmer. I used to be. But in the past two years I have switched my training to either swim late morning on the weekends (9 or 10am start) or in the evenings after work.  I woke up wondering if I would react like this cat once I hit the water… 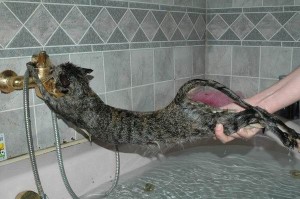 We arrived at London Fields Lido just after 6:30 in the morning. This felt early. Like, really early. But the Lido looked calm.  Like it would be a good day for a swim. 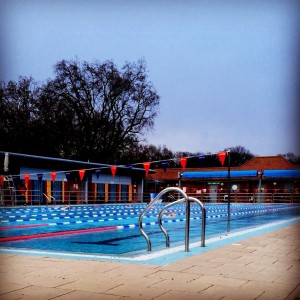 It was an overcast morning, but the weather said that by 9am the sun would be out. I looked at my collection of goggles and chose my Zoggs Predator Photo-reactives. No, I hadn’t worn them before. Could this have been a rookie error?  Yes, maybe. But I have worn this shape Zoggs for years and love them. So I wasn’t really worried.

I hadn’t swum a 5k since June 2011, and since that time a lot has changed. I started training with Red Top Swim in autumn 2011. I fractured ribs in May 2012 putting emphasis on shoulder position and stabilisation as a part of my rehab. I started bootcamp in January 2012, realising that I needed to work on my strength and conditioning in order to get stronger and faster while minimising risk of injury – and since then I have switched to a more intense bootcamp session as well as starting pilates reformer. I had hoped that all of these things would make my first 5k swim in nearly 3 years feel “easy” – at least easier than last time around.  And these things also gave me the confidence to peg a goal of 1 hour 40 minutes for the swim – knowing in my heart that although I had not spent as much time as I would have liked in the water before the swim, that I did have enough strength and understanding to set this as my 2014 goal.

Following Swimathon President and Olympic Champion Duncan Goodhew’s advice, I looked at the water and thought to myself “I am lucky I am able to swim 5k today”—swiftly followed by my next thought “can we get in yet, it is FREEZING!”  And then before I knew it I had pushed off the wall, started my countdown to 100 lengths of a 50m pool.

And I swam. I drafted fast feet for about 20 lengths, I had to adjust my goggles a few times to get the seal right, and I kept swimming. And thought to myself “this does not feel so hard, in fact, this feels good!” And I swam some more. Finally there were 20 lengths left and I could not believe how strong my shoulders felt. And with 10 lengths left I hopped onto fast feet again. And with 4 lengths left, I looked at my watch for the first time and saw 1 hour 35 minutes and thought “OH MY GOD I CAN FINISH IN LESS THAN 1 HOUR 40 MINUTES!” And so I pulled and swam and kicked and gave it my best to finish strong.

1 hour and 39 minutes later, I was done.  12 minutes faster than my last 5k in the same pool.  Feeling strong and stable.  And thankful.

It was a good day for a swim.

Disclosure: I was invited to be a part of the 2014 #swimathon #blogsquad and received free entry into the 2014 Swimathon as well as the opportunity to be coached by Olympians Duncan Goodhew and Karen Pickering. As a part of the my blogsquad commitments, I have regularly posted about my training and lead up to my 2014 5k Swimathon challenge.  The Swimathon is the UK’s largest swimming fundraising event, with thousands of people participating each year.  I have participated in the Swimathon since 2010, doing the 5k in 2010, 2011, and 2.5k in 2012 and 2013, and once again 5k in 2014 which brought me a shiny new personal best (and a new personal best for DH too!). Thanks to the Swimathon team for allowing me to be a part of their online campaign this year, and to rediscover the joy in simply being able to swim. Congratulations to everyone who completed the challenge this past weekend!