This morning I had fingers squishing around in my knees. Voluntarily.

Needs (knees) must. And all that.

It’s strange to have someone poke around IN your knee. To make it feel better. Poking around and making it hurt, hurt to feel good.  Fingers locking onto one part in order to move around and loosen up another part. To an outsider my knee seems so loose, but in reality it is as tight as tight could be – and there is only one person I trust to help me to manage the problem by manually loosening things off – Michael “Magic Hands” Collins.

After Chicago my left knee was in bad shape – again. Actually it was approaching “needing ginger management” just before Chicago. I headed out on a practice run on the Tuesday before Chicago, for a simple “race plan practice session” and wouldn’t you know it, the simple session caused a return of massive inflammation – on the left. But after managing inflammation cycles for 8 months last year, I understand how to do that – as demotivating and disheartening as it can be, at least I know that devil. (Better the devil you know, right?!)

But the picture above is my RIGHT knee. Oh joy. Tight as could be. And PAINFUL. Going down stairs has been nothing short of torture. Which is very very bad when you live in a house with four flights of stairs. Oof. 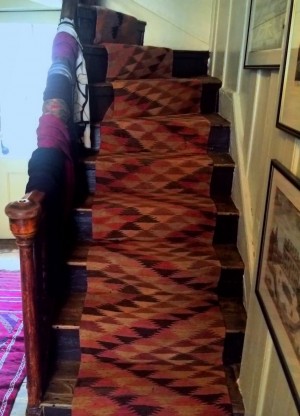 Now it’s time for a knees up – not in the colloquial sense, but in the rest day sense. Today I am letting my knees settle down and recover from all the prodding around.

A statement was recently made that I have not been training seriously this season. There are two things I would like to address in response.

First, my thoughts on judgement. On Saturday I had a conversation in which a group of us idly spoke about judgement. In my opinion, everyone passes judgement of others all the time. It is not the fact that we judge others, or make observations about them, that is wrong. Rather, we need to look at the intention behind the judgement and judging. If the intention is to have chit chat, to build and forge bonds with others around you and you are doing so by, say, commenting on someone’s top, well, yeah, judging might not be nice and it may hurt feelings but it is benign in its intent. If however the judging is done with ill intention – to demean or diminish other people for the sake of promoting one’s own position – well, you be the judge of that!

Second, my thoughts on what it is like to manage chronic knee issues. My 2013 season was a season that almost didn’t happen. At the start of 2013 I was advised to stop doing triathlon and any activity that loaded my knees. This means bootcamp, running, strength based cycling. It was recommended to me to stop such activities immediately. With the help of a rehab rheumatologist I worked myself back to a level to be able to SOMEWHAT continue to do these activities – all with the threat of knee replacement and causing further degradation to my joint lingering in the back of my mind. It is mighty exhausting to manage through problems like I have with my knees – and the only way I have found to do it is with extensive use of rehab tools like the Alter-G, a very limited running programme, and a lot of mental endurance as I’m always thinking about this situation and IT SUCKS to always think about a problem. So yes, the result was that my off season was unconventional – but it was not without training. More, it was without structure. To give myself a break from doing what had exhausted me MENTALLY – managing my knee issues. Then, when I was ready to get back to training with structure, I fell down my stairs – yet another issue to manage and come back from. Combine my knees with my fall and add on top a heinous work travel schedule… Well, it is one of the reasons I have posted less about my numbers this year as for me, it is less about the numbers and more about the simple fact that I am doing this at all. Does this make me less committed as an athlete? No. It just means that my training may look different from yours. Judge if you want. Meanwhile, I’ll be having a knees up!