Sometimes when I run I have nothing running through my head – a complete zen experience.  Other times I have song lyrics.  Today I had one word, kind of on a repeat.  A two syllable word.  One syllable for the right foot, one for the left.  Over and over.  For about 7k.  That word?  Thankful. 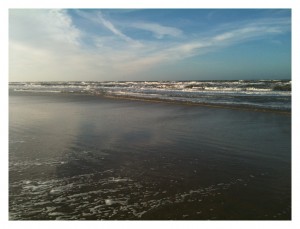 Thankful:
– For legs that carried me
– For the ability to run continuously
– For a year of hard work with Coach T going from my first continuous mile to my first stand alone 10.5k race within 12 months
– For blue skies and sunshine – and a cold bracing wind – that made me feel alive
– For fantastic friends like Rob, Eric and Renee
– For the continuous support of DH, my number one cheerleader
– For a text message from Michael who I sometimes think may believe in me more than I do
– For Dawne who reminded me that this was indeed my very first proper 10k race

In 2008 my friend Rob came for dinner.  Rob and I have been friends since August 1997, when we showed up for our first day at work.  We have both grown up a lot since then – Rob lives in Holland now, and I work for a different company.  But in some ways we still have a lot in common – not just our memories, but a commitment to living life as fully as possible.  Over that dinner we talked about running and triathlon, and Rob asked if I had ever heard of the Egmond aan Zee January run.  He had done the half-marathon twice in Egmond – but the organisers offer a half and quarter marathon distance.  He said it was a great run, taking in the town, the North Sea beach, up and over dunes and dykes, and through grassland.  It sounded beautiful.

I signed DH and I up for the 2010 Egmond run – but with all of the problems I was having with running, I deregistered us.  No matter as the race was cancelled due to the brutal winds and icy cold weather – deemed too dangerous for runners.

Throughout 2010 and with the help of Coach T, I went back to basics with my run, working on leg strength and stability.  I decided that Egmond 2011 would be possible.  So I signed us up.  Why not?  Holland is a 45 minute flight from London City Airport.  Going over for the run was a chance to spend time with Rob – who doesn’t like to spend time with their friends?  And although I have been to Holland close to 50 times over the years, this would be my first time there with DH – and it would be a chance to explore The Hague a little bit too (which despite countless business trips I have never done!)…

Our adventure began in The Hague

We arrived in The Netherlands on Saturday afternoon.  DH wasn’t feeling too great, so we decided to have a nice and relaxing day with just a quick trip to the Escher Museum punctuating a lot of rest.

What an incredible museum – set across three floors, the ground floor introduced Escher and his method (woodblock etchings and lithographs), the first floor his most known works, and the third floor an interactive floor focused on perspective and geometry. 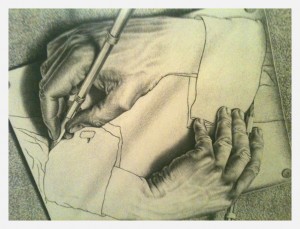 This might be one of Escher’s most well known pieces… 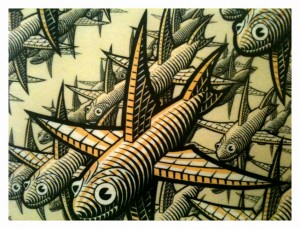 Escher’s version of the “F-Bomb” – the Fish Bomb…

I always feel incredibly thankful when I go to a museum like this, to see such iconic art first hand…

As for The Hague…  I have been there for work so many times.  The bare trees etched against the winter sky provided a sombre sleepy backdrop to our very quick visit.

I must admit I was a bit wary of doing this race.  Although I have been keeping up with my training, I had never done a stand alone 10k race before.  And I have only ever run 10k once – during the London Triathlon.

I knew my legs were probably up to it, but I also knew that I would go slow.  Slow and steady.  But slow can be frustrating too.  I just had to keep my head focused on finding a comfortable steady pace that would allow me to finish the race.  I also decided to go with the game plan of not letting my heart rate elevate above 165bpm – that is my steady “race pace” level.

I was curious what 10.5k would feel like.  And I was a bit nervous about the terrain – 3km around the town, 2km on the beach, about 2km up, over, down, up, down through and on the dunes and dykes, about 2.5k through grasslands and past cows, then into town and home. 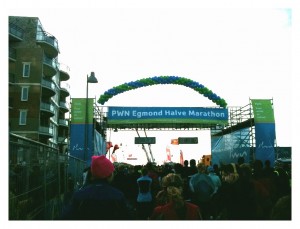 Just like the word that ran through my head – thankful – that is what I feel for this race.  I thought it was a well planned and run event.  I most definitely was the slowest out there.  But as my friend Eric told me, “Don’t worry – the slowest gets all the attention at the end!” – so true!  As the last woman through the finish line I received a bouquet of flowers. 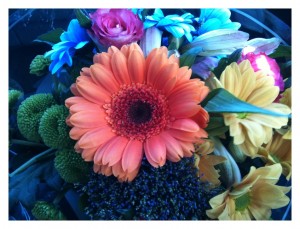 I kept my pace slow but it was a pace that I knew would allow me to finish with a continuous run, no walking.  I worried about a blister from the previous week’s run, but thanks to a generous application of Bodyglide on the area I had no problems (thanks to Gita my neurophysiotherapist for the reminder to do this!).  I decided to use a new type of compression sock with my running ankle braces and was nervous as to whether or not it would work – thankfully the Sugoi Ladies Running and Recovery socks did not let me down and were the best I’ve worn to run in yet.  My heart rate stayed in the target range.  I was concerned about my ankles and their ability to handle the mushy sand to get onto and off of the beach – thankfully no problems.  I haven’t attempted hills since the Blenheim triathlon in June 2010, but thankfully my legs cooperated.  And although, as Renee told me, it is not about the speed – I wasn’t dead last.  Piet, who I am pretty sure also had a neurological problem, finished after me – I hope I didn’t take his flowers.  I have to hand it to the both of us – we got out there, lined up, and ran proud.  Indeed I am very proud of my achievement!

This race also allowed me to share the success with friends – both old and new. 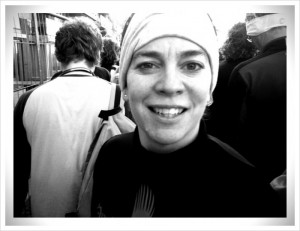 Concern etched between my eyebrows…

I found my friend Rob, and we ran through the town together.  A great start to the race for me, and also for Rob and his 2011 fitness plans.

I saw Eric at about 2k in – for the first time.  Eric and I have been chatting on Twitter for almost 2 years about things triathlon, but this was the first time we had met.  It was incredible to see that he travelled to Egmond from central Holland just to cheer us on.  I met up with Eric again at 7k.  He had the town jester sing a song for me as I ran down the final hill, and then he joined me as “my bodyguard” for my last 3k, riding his bike and chatting and keeping me company as I headed up the back of the pack. 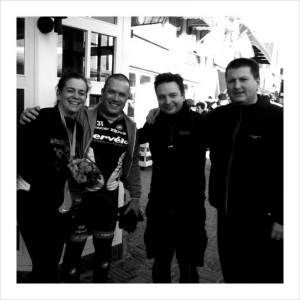 Me, Eric, DH and Rob after the race

I also finally found Renee aka LowFatPie after the race.  I “discovered” Renee on Twitter in December, when we had the chance to meet up in London for the most expensive margarita ever.  I’ve been reading her blog and enjoying exchanging Twitter motivation.  It was wonderful to see Renee at the end – I think I may have won the contest for best race hair!  We got a quick photo to memorialise the fact that we went out and conquered our respective fears of the race.  Fantastic.  Renee has a better bling photo on her site, as well as her race thoughts, in case you are interested in reading a different perspective… 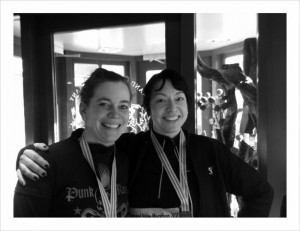 Grinning ear to ear with Renee at the end

I have a lot to work on for the coming year – lots of physiotherapy to do, work on my leg strength and gait mechanics, work to even out my left leg strength to catch up with my right.  I have lots of ambitions, and lots of patience, which I hope will carry me to my goals.  But I couldn’t think of a better way to remind me why I am doing all of this – the Egmond Quarter Marathon.  This was a great way to start 2011 – with friends, with sunshine, with a smile.

I am out there running, because I can.  And for that, I am thankful.

One response to “The Egmond 10.5k: Thankful”