Wow.  It is hard to write this post and to really capture exactly what I feel on the back of the weekend.

I had one of those amazing weekends of training, where things just clicked and IT ALL FELT SO GOOD.

A buzzing, glowing, golden feeling.  Do you know the feeling?

I put myself in the place where, one week out from my goal race, the London Triathlon, I focused 100% on what I was able to do and how good things were feeling compared with a year ago.

I have now been training at an ever increasing load (constant base building and redefining the base) since May 2009.  I have coped with my share of bad feelings and setbacks.  I have sublaxed my knees (both) in 2009, meaning that my attempts to run were short lived.  When I came back to start running again, I developed ankle tendonitis – the same type of tendonitis that saw me receiving my diagnosis of nerve disease in 2004.  I revisited my need for orthotic corrrection.  I took on a coach in September 2009 to help me to build, to become strong and to start again, from square one.  I’ve learned that I may always have a niggle and an ache, but it is all balanced by the strength and physical abilities that I am developing.

When you look at the progression I’ve made in a year, it is simply massive.  A year ago no way could I run 5k constant.  Now I am doing regular 5k runs as a part of my weekly training, twice a week.  A year ago the idea of swimming more than a mile never crossed my mind.  In April 2010 I swam 5k continuously in less than 2 hours, and constantly swim more than a mile in weekly training sessions.

So, with this in mind, my theme for the last weekend of training before London was to focus on my progress. My new strength. To tap into the new confidence that I have in my body. And to visualise finishing London on August 8th.

This weekend I was at the track on Saturday with Coach T. 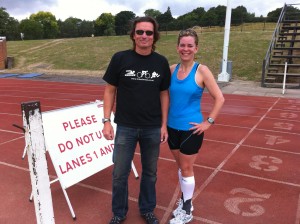 The set was pretty straightforward.  Just run 400s with 30 seconds rest between. And keep on running until we ran out of time.

So I ran.  And for the first time ever, I found myself running, laughing, smiling – and kind of liking it!  A huge massive step forward.  I left the track with a golden glowing buzzing feeling. So damn good.

Then on Sunday I had signed us up for the Nokia Thames Swim.  The first ever Thames Big Swim, this 2.25 mile swim went from Hampton Court Palace to Kingston – yes, in the River Thames.  And no, we didn’t see any dead bodies!

It was not a great sunny day.  But who needs sun for a swim? 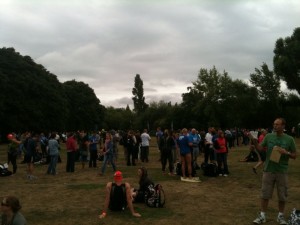 A thousand people milling around under the clouds

The Thames itself was fine.  I am never 100% convinced about the water quality, but clearly the ducks and swans had no problem with it.

Birds on the right, swimmers on the left

The water temperature was 20.6C – not too bad, with a wetsuit.  But we had to tread water for about 5 minutes before the start, which meant my hands and legs got cold.  I was a bit worried about cramping, but thankfully this didn’t happen. 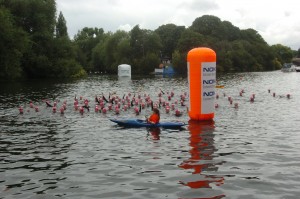 See me? I’m the one in the pink swim cap!

Woo hoo! I just swam 2.25 miles non stop!
Ugh – how much Thames river water did I drink?
What? Diet Lucozade? Only 50 calories? I WANT SUGAR NOT DIET!

What a fantastic feeling.  A year ago I never even thought about swimming at distance.  I entered this swim on a whim – some of my clubmates were talking about it.  We got our entries in at the last moment.  And I did it – bang at the 50% mark in terms of finish times, for my first ever attempt at this distance.  I DID IT!.

After the swim we met up with friends for a pint and a meal.  Perfect end to a great day. 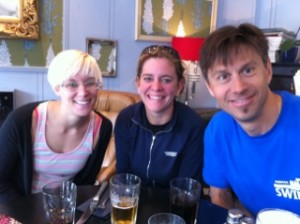 Laura, me and Jon – pints and coca cola to wash down the Thames!

So, it is now less than one week before the London Triathlon.  My goal race.  I have put myself on the race course in my mind.  I have focused on the positive.  I have smiled and laughed a lot over the last week, knowing that although I won’t be the fastest, I will get it done.  My first Olympic distance triathlon on Sunday the 8th, and I am ready to tri, because I can. And I am strong.