After the London Triathlon we always have a bbq.  I was partially comatose and trying to eat a little, to come back to life.  Meanwhile DH was full of energy, chatting away, planning our next adventures.  He decided we would do a 5k swim.

On Sunday, SFT (the triathlon swim specialists) held their inaugural SwimFesT at Alexandra Lake by Lakeside Shopping Centre in Essex.

In 2007 when I decided to do my first triathlon I signed up with SFT for swim analysis and also some open water classes.  I got to know Dan and Keeley Bullock, and DH also did analysis and lessons with them.  Through their mailings, we knew that the SwimFesT was being held in memory of Lou Parker who died from cancer in July, and offered a 5k option (with all entry proceeds going to Melanoma Research Trust.

So I signed us up.

As the date got closer, my time in the pool was getting less and less.  I was a bit worried about the day, not just because of my lack of time int he pool, but also because of the impacts that the colder water would have on my legs.  My feet naturally supinate and I get cramping in my calves (by the soleus) in cold water or when expending a lot of energy kicking during the swim.  I think this is triggered by my nerve disease.  And cold water also has a strange effect on my nerves and sensation.

I was nervous.  But in keeping with my approach since completing the London Triathlon, I decided to give it a shot and just focus on finishing while having fun.  I knew if things clicked, I should be able to get around in about 1 hour 45 minutes or so.  But things really had to click.  So instead of obsessing about hitting this time goal, my goal became to complete in less than 2 hours 15 minutes, which is the qualifying time that would allow me to ballot for the Chesapeake Bay Swim (a 4.4 mile swim across the Chesapeake Bay in Maryland).

Through Twitter I convinced Jon and Laura to do the swim too.  So we all met up at some ungodly hour on Sunday morning (when clubbers were just heading home) and we made our way to Lakeside. 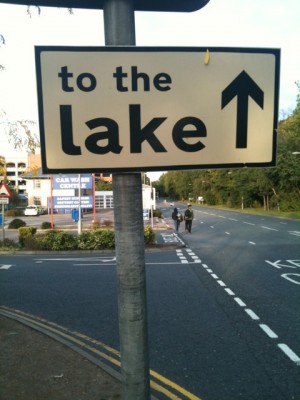 The weather had been predicted to be awful on Sunday morning.  12C and raining.  It wasn’t raining.  Thank goodness.  But it was quite cool.

You can kind of see us – L is for Lakeside, right?

We changed into our wetsuits, and it was cold.  Did I mention that already?  The water temperature measured at 16.1*C… 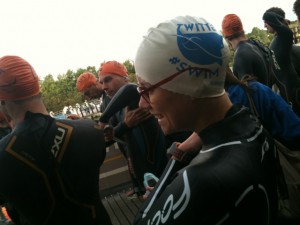 At about 8.55 we were cleared to jump in the lake.  We were announced, one by one, with our names and age groups.  Like horses, triathletes age up.  Yep.  That means your age group is determined by how old you are by the end of December of that year.  This is all fine in theory.  But with a small field and each person being announced, that meant that my name was called in the 40+ age group.  It seems so cruel.  I have two months before I hit that milestone.

I cracked a joke about being 40 before my time, and jumped in the water.  IT WAS COLD.  Really cold.  So cold that my calves instantly got tight.  Now I have fought the cramps and won before, like the Thames Swim  we did in August where it was about 17C.  But those cramps and that tight feeling didn’t hit my legs until about the 45 minute mark.  On Sunday the tightness hit as soon as I entered the water.  I think the water was 15*C…

Ok… An instant change in race plans.  This was not a race, for me, as I mentioned.  But I had hopes of hitting a better time than my pool based April 5k swim.  Instead, I put that aside.  Finishing, not cramping, not calling the kayaks.  These became my new aims.

When the horn sounded, instead of putting myself in the mele, I held off, getting a clear start.  I took it easy, waiting to warm up and to feel good.  My breathing felt fine, and I concentrated on making the most of my swim stroke and form.  Nice rotation, high elbows.  But not fast.  Not at all.

This was a chip timed swim, in laps.  Participants were asked to swipe across the chip reader (on the jetty) with each lap.  So 7 swipes of the card reader.  The first two swipes I felt fine.  In my second full lap, I was lapped.  Man there were some fast swimmers out there… The fastest woman I think was 1 hour and 12 minutes for 5k! Wow…

I decided as I did my third lap to try to speed up.  But I was faced with tight legs.  Horrible.  So at this stage I reverted to mostly a pull (no kicking) to try to avoid cramps.  My swim started to turn into a mental battle – not too fast, how do the legs feel, flex the feet, shake the hips out, focus on good floatation…  A lot of focus on things I never really pay attention to in warmer water or in the pool.

By the time I hit my fourth lap I felt good, but slow.  I had lost pretty much all the feeling in my feet, but my hands were holding together well.  For those that swim in cold water, you know that you can sometimes get hands that “claw” because the nerves just stop working and you can’t really tell your fingers to close together.  But this didn’t happen too badly for me.  I was pretty pleased.

I found some good feet to hang off, two other swimmers my speed.  This means about 20% less effort to achieve the same speed.  Very nice indeed.  We kind of changed places back and forth over the next few laps.

And then, before I knew it, it was over.

I think I hit about 1 hour 52 minutes.  Not quite sure as the timed results are not available.  This equals my pool based time from April, but I am way more pleased with the results than the time indicates.

I felt really comfortable in the water.  How crazy is it that 5k in the water seemed easy?  A year ago I never even considered swimming this far.  Running, yes, but swimming?  Amazing what can change in a year, when you open your mind and train and trust in your body…

I was super please with my sighting and swimming.  In an open water swim you can’t rely on the lines to guide you straight from point A to point B.  This course had clearly marked buoys, and my sighting was really good.  I also used the “surfboard” visualisation to ensure my hands hit the water in front of my shoulders without crossover (Thank to Paul Perry for that tip!).

I found myself needing to focus on my whole form a lot more than normal, as I was doing so much pull (no kicking) and was cold.  I think I did a good job of remembering the key swim elements – good rotation, good catch, pulling with the whole arm.  At least I am pretty sure I did as my shoulder blades and triceps sure feel that good kind of exercise sore today!

One thing I think was a bit silly of me was doing an hour and a half of Hatha yoga on Saturday.  This included about 30 minutes of solid plank work. 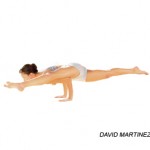 Ok, I was not doing THESE poses, but these are the variations our instructor had on offer.  As you can see a lot of core work and balance required.  I just wound up doing normal planks, side planks, chathuranga…  The usual.  But for many many minutes.

This type of core work the day before a long swim was not the brightest idea I have ever had.  On Sunday night I could barely move.  My core hurt so much from floating for about 2 hours after doing all the yoga.  The good kind of sore, but sore nontheless.  This is one thing I would do different.

We had a post race coca cola (gotta get rid of the nasties from swallowing the water) and coffee (to warm up).  Also some fries.  Because I was HUNGRY.  And as DH will tell you, I get slightly homicidal if I get too hungry.

We headed back to central London as we had Sunday lunch plans (late lunch).  I settled in at my favourite local restaurant, Hawksmoor.  A delicious Bloody Mary while waiting for lunch, and a Lovely Rioja to accompany it… 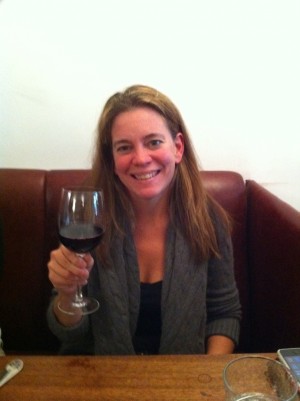 Cheers. And the red face? Sun and cold water will do that…

I was really pleased with the day.  And like I said, I think this is it.  Wetsuit to be hung up.  I am feeling tired from the season, and although I would love to do one last triathlon (Hever is this Sunday, Barcelona is in October) I just think that my body may need a bit of sleep on the weekends.  And a bit of care and attention.  I do not want a repeat of last season and needing to take 2 months off running because I pushed things too hard…

To celebrate the swim, Shaky Pete, the most amazing bartender in all of London, made me a perfect pina colada from the new Hawksmoor drinks menu from their new location in Covent Garden (opening in October).  This pina colada didn’t use any cream.  Instead it used coconut sorbet (hey – with coconut water, what better recovery drink is there), fresh pineapple, and Element 8 spiced rum, all blended to perfection.  A recipe totally worth trying at home… And a recipe that made me think warm thoughts (my feet were STILL cold at this stage of the day, 6 hours after finishing the swim) 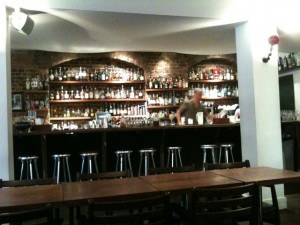 Shaky Pete is a blur behind the bar at Hawksmoor

Next week I will meet with Coach T and talk about plans for 2011.  There is so much that I would like to do…

And there is a lot of corrective work and strength building I will do in the autumn / winter months.  New orthotics are on order.  A physiotherapy visit to have my fundamental weaknesses medically addressed with one of the researchers I have had the pleasure of meeting at the National Hospital for Neurology.  Yoga, to work on my core and to get some flexibility back while stretching out my legs.  More running.  More cycling.  A bit of swimming.

And oh yes.  Eating.  And having fun.  And a new website to launch soon.

Here’s to an awesome Year of Fitness .