When my friend Jeannie asked if I would be interested in contributing to an art exhibit, writing about the theme of leaving home, I decided it would be great to be a part of Lee Ming Wei’s work.  Currently on exhibit at the Museum of Chinese in America, Lee Ming Wei has created a piece of work entitled “The Travellers” with thoughts from 100s of global contributors on what it means to leave home.

Sadly, our book was lost by the Australian post service, which was a shame because by the time it had reached me in April of 2011, the book was telling amazing heart felt tales, each penned by people Jeannie had met via Twitter.

Below is the piece I penned in our book number 76.  I think it is the perfect time for me to share this post with you – I’m just about to finish my last business trip to Japan for 2011, and the post relates to my first time leaving my home country to live abroad in Japan in the 1990s.

Thank you Jeannie for the chance to contribute to this project, and to be a part (even a lost part) of such an interesting piece of art.  Lee Ming Wei’s exhibit is showing at the Museum of Chinese in America in New York until the 26th of March 2012.

The first words in my journal, from July 1993.  Years later, I stared at the words.  Who was Hachiko?

It was July 1993, I was 22, and I boarded the plane to move to Japan.  I decided that when I graduated from the University of Maryland that I would go to Japan and teach English – as a Japanese major I never had the chance to study abroad while in school, but I still wanted the experiences of living abroad, of immersing myself in a foreign language and culture, and of leaving home…

When I think back to those first days, it is all a blur of memories.  Jetlag.  Being awake at midnight and feeling like it was time to start the day.  Thousands of new faces, all English language teachers arriving in Tokyo to learn how we would be spending the next year (or two, or three, or more).  And Tokyo.  Bright lights.  Pachinko parlours.  Signs in a code that I had yet to crack. So excited to start a new adventure. To begin *my* life, my life in the real world, after college, on my own.

I left home and within a week found myself wearing a yukata summer cotton kimono, dancing through the city streets for the summer Obon festival.  Snacking on octopus balls topped with fish flakes and seaweed.  Surrounded by the heat and humidity of July in Japan.  Learning to pour my neighbours sake, exchanging traditional “onagare choudai” greetings as we emptied our cups.  Riding my bicycle through neighbourhoods with rice fields dotted next to apartment complexes.

The statue outside of Shibuya station in Tokyo.  Hachiko was a dog, who every day waited for its owner to return home at the station.  One day, Hachiko’s master died and never returned, but legend has it that every day for nine years, until Hachiko’s death, the dog waited patiently at the station for his owner’s return. 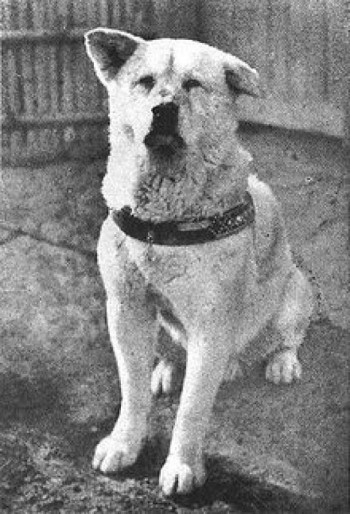 Years later, looking into my journal, I couldn’t quite recall who Hachiko was.  Why did I write that in the journal?  What was I thinking?  Who was this person?

Kind of what I think about myself when I read my words from all those years ago – that journal is a glimpse into who I was, what I was thinking, what I was learning.

Scrawled in the book is a recipe for pizza dough and sauce – it is during my years in Japan that I learned to cook, to make the things that I like if I wanted them to “taste like home”.  I look in my cupboards now and I see green Tabasco sauce, the perfect condiment to add a spicy kick to that pizza – a little trick I learned when I lived in Japan.

Reading through my journal I see that when I left home to live in Japan, I learned that home was something that I could create.  I lived in a new place, made new friends, and experienced a completely foreign culture – but at the same time I learned to make the things that I missed, I kept in touch with the people regardless of distance, I learned Japanese, I learned to communicate and understand a new place so that it could feel as much like home as the home I have left behind.

By leaving home and boarding that Japan Airlines flight in 1993, I found home.

I learned that home is with me all the time, no matter where I am.  Home is wherever I choose to make it.

And I met Hachiko… 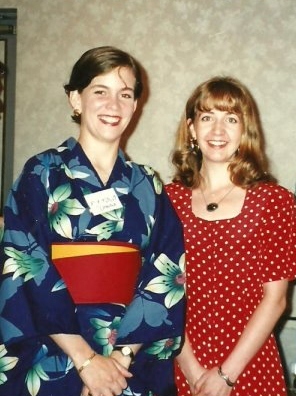 This is a photo of me and my friend Sara, at my farewell party when I left Japan in July 1995.

3 responses to “Thoughts on Leaving Home”