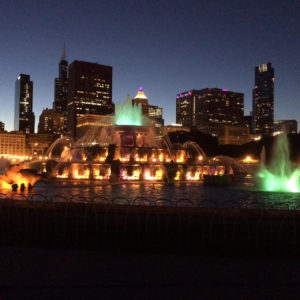 I came to Chicago to do a race. And by racing I hoped to feel whole again.

The end of my summer was full of sadness, injury, anger and loss. My father died in mid July, and with it my sister and I not only lost our last living parent, but we also lost many of the last physical things which belonged to both my mother and father through what can only be described as the ultimate in cruel acts.

I injured myself at my father’s house, hurting my right shoulder from the repetitive lifting that I did in an effort to help to clear his garage. A garage that was totally off limits to me – both while growing up as well as into adulthood. I finally got to see the treasure chests – box after box of a lifetime of his hobby and passion, fishing. From the lead smelter he had when he and his best friend Jake used to make buck tail lures, to the bags of marlin heads when my dad made his own Pacific offshore rigs.

With this injury and full of a sadness that made training feel pointless, I felt completely unsure about going to Chicago. But as I stepped onshore at the finish of the Dart 10k swim on September 6th, I knew that I would also board the plane to go to the ITU Open Paratriathlon World Championship race in Chicago. When I did the Dart, I re-discovered something I learned many years ago – that endurance sport makes me feel whole.

My trip to Chicago was a whirlwind. I landed at 10am on Friday, got to my hotel at noon, and before 1pm had checked in and had my race number. I watched the women’s elite world championship race with friends, and then quickly built my bike and headed out for an early dinner with my friends who raced the Elite Paratriathlon World Championships. Before I knew it, it was Saturday morning and I was eating my oatmeal and bananas and heading to transition to get ready to jump into the lake and do one last triathlon for 2015.

I chose to come to Chicago for completely selfish reasons – to try to find a glimmer of my self by doing a triathlon. I hoped it would be possible to feel joy through sport, and I hoped that racing would help me to feel a lightness in my heart that had been missing since I found out my dad had taken a turn for the worse on July 7th.

My motivation was to find MYSELF and to feel whole again by DOING this race.

I did not have a mantra. I did not think of any particular thing while out on the course (except for maybe the Zombies I fully expected to pop out from behind the corners on Lower Wacker…) I just focused on each stroke, each pedal, each step.

And I found myself smiling. THE WHOLE TIME.

Thank you to the ITU for hosting the open category, thank you to USAT for putting my name forward to start and not suggesting I withdraw even knowing about my injury, and thank you to my coaches, friends, family and especially my husband for encouraging me to get on the plane to do this race.

Thanks to this race I was able to feel like myself again for the first time in months.