Now… who used to say that was their life philosophy?  Oh yeah… That was me… Not in a negative way – I just thought that is what you do when you grow up – enjoy life, then die.  My how times change.  Nowadays that philosophy isn’t for me…

Today I prefer: Eat, Drink, Be Merry, Get Fit, and Thrive.

That’s the reason why I started this blog – to chronicle my journey to fitness while managing the deck of cards I have been dealt (the challenges associated with nerve disease).  To write about my approach to eating, drinking, happiness, fitness, and in the process discovering ways to thrive rather than to be a victim of my circumstances.

I joined Twitter and started to use it to find daily motivation from other triathletes and like minded people.

I discovered great people.  I learned about a whole new world of blogs and communities.  I’ve made some great friends.  Twitter is a fantastic resource – for articles, conversation, inspiration…  Through it I started learning more about approaches to fitness, nutrition, and life.  I started reading about the properties of the food I eat.  About how eating impacts fitness.

And I started reading the statistics about the importance of healthy living.

The stats are scary…

(taken from the National Heart Forum press release dated 17 February 2010, launching their report “A prediction of Obesity Trends for Adults and their associated diseases:  Analysis from the Health Survey for England 1993-2007”)

“Two-thirds of the United States adult population is overweight (defined as a body mass index of at least 25) or obese (a BMI of at least 30).”

“Only about one in every six Americans who have ever been overweight or obese loses weight and maintains that loss.”

“The World Health Organisation estimated in 2005 that 1.6 billion adults worldwide were overweight, of whom 300 million were obese.”

“About one sixth of the adult population worldwide [is] overweight…”

“Projections estimate that by 2010, half of all school-age children will be overweight in the Americas.”

“The evidence that all types of physical activity protect against weight gain, overweight, and obesity is convincing.”

“The strongest evidence… shows that greater body fatness and abdominal fatness are causes of cancer of the: colorectum, oesophagus, pancreas, breast, endometrium, kidney, and gallbladder.”

(taken from Food, Nutrition, Physical Activity and the Prevention of Cancer: A Global Perspective – available online from the World Cancer Research Fund and the American Institute for Cancer Research)

Frankly, I’d rather focus on this – the issues in our society, in our schools, the costs our governments will face…

…rather than discussing if this kickass triathlete is fat… 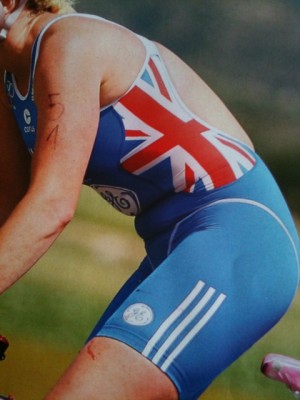 Not that I don’t like talking triathlon.  And performance.  And training.  And nutrition.

But, I’d rather understand what these athletes just did in their workouts… 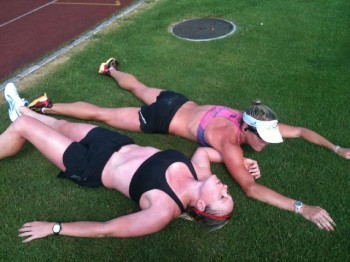 …than banter about the few kilos extra they might be carrying…

In fact, if they are carrying extra weight and still performing the way they do, sign me up to that training and nutrition plan!

OK, kind of kidding with that.  I mean, I do realise that these athletes are PROS.  I guess as pros it is inevitable that we will talk about whether or not their weight impacts their performance.  And I guess if you have a rep as a junkfood junkie and you are a pro, I guess we will talk about that too.

But fatness?  Is it just to label the woman on the bike “fat”?

The “fat” athlete on the bike?

She is the same athlete as the “fat” athlete in black on her back next to the track.

Still think she is fat?

Health and fitness and thriving… That’s what I care about…

I couldn’t give a rat’s ass… 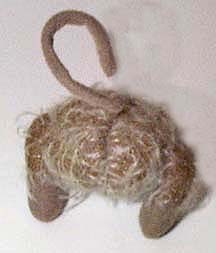 But… I AM interested in her FITNESS – what she does as an athlete to train and maintain her performance.  Especially since she has bounced back from huge injury to such performance heights.

When it comes to FATNESS…  Well, I just don’t care about Jodie Swallow’s weight.  But I do care about those scary stats.  And what they say about our society. And our priorities.

I think obesity is a HUGE problem.  I agree with Anne Milton – the UK parliamentary under-secretary of state for health.  On Radio 4 in July she said that the National Health Service should just call people fat, not obese.  Her implication?  That we should all stop hiding behind words, that we need to confront our problems directly, using a language that is personal, so that everyone can understand.

With that in mind…

I don’t think that Jodie Swallow is fat.

But the fact that over 50% of the kids in America are overweight?  That scares the hell out of me…  And I think that *is* my problem.  Because my taxes are going to pay for it.


8 responses to “Fatness and Fitness: Thoughts on Eating, Drinking, and Merriment…”