I know, it seems a bit crazy.  It is only mid-November.  How can I possibly review 2011?  Unless, of course, it is from the perspective of triathlon, and sport.  My 2011 “racing season” ended with my run in Paris in September.  Since then, I have been mulling things over.  Specifically – what did I achieve in 2011, and what does 2012 hold in store.

Rather than an account of what I achieved (a lot of really cool things, including this, this and this) – I think what I need to review is my epiphany moment.  Actually, it was two moments.  Two separate conversations that completely redefined the way that I am approaching all things swim bike run.

Epiphany Moment Number One –Strong Like Bull Training Camp, and a deep conversation

A lot of people have asked me what I really thought about Strong Like Bull.

If I was still 12 years old, Strong Like Bull would’ve broken me.  It would have shattered my confidence.  I would have felt like I was totally and completely athletically incompetent.  That I should never have shown up.

When you decide to sign up for a training camp, you need to know what you are getting yourself into.  I knew (I had been told by people I knew online) that Strong Like Bull was HARD.  The people who said this to me?  12 hour ironmen.  The USA 50k running champion.  John Hirsch, the ironman pro who runs this camp, told me that I would learn to leave myself out there on the roads in Spain so that you I would be stronger on race day.

I had no idea how tough it would really be.

One day we road up Puerto del Sol.  Or should I say, everyone else road up, and I got “a helping hand” from road cycling pro Dylan McNicholas and camp coordinator Sean Langford.

I couldn’t make it up the hill without a push – and not just a mental push but a physical one.  Dylan pushed me to the top, he gave me my Rocky cycling moment.

But that was not my epiphany moment.

Rather, my epiphany moment came on the ride to the climb.  Sean was part of the crew riding on the “easier” route, and we had a conversation on that Spanish road which went something like this.

Me: You know I have a lot of issues right? This riding is TOUGH.
Sean: Don’t you see that you *are* riding? You are doing this!
Me: Yeah, but I have never done things like this before. I’m scared. This is an amazing experience, I can feel myself getting stronger. But if I get too strong I’ll lose my paratriathlon classification.
Sean: You need to stop focusing on this stuff. Don’t look at what you never used to be able to do.  Don’t look at what might happen.  Look at what you can do.  Stop looking over your shoulder at can’t or might.  Focus on the can and the road in front of you.

Epiphany moment number one happened about an hour and a half before this photo was taken. 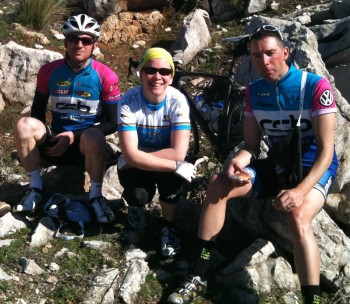 (note – Dylan is on the left, he just pushed me up a giant climb after doing his own climb to the top at his threshold and puking upon arrival, and Sean is eating a sandwich on my right. I’m smiling but unable to eat because I was so exhausted. Like I said – SLB can break you or make you.)

In April my friend Laura and I attended a workshop with Kim Ingleby (trained NLP master and mental strength coach for the Team Great Britain triathlon team).

Now, I don’t really understand all of the ins and outs of NLP, and its use in sport.  But I knew a few things which made me sign up for this workshop.

First, I knew that after SLB I needed some help to focus more on what I can do, and to improve my mental approach to sport.  And second, I knew from conversations with her clients that Kim Ingleby and her use of NLP in sport is incredible – they don’t call her the Brain Ninja for nothing.

In that three hour workshop on a Friday evening in Putney, I had a moment.  A moment triggered by two simple questions:

Why do you do what you do?

And then this follow up question.  This question nearly killed me.

I do what I do out of fear.

My whole motivation has been fear based.  And to quote a Bruce Nauman neon sculpture that I love: 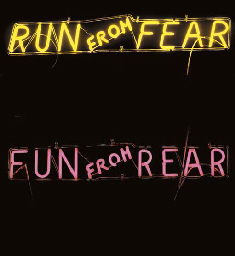 And that’s just bullshit.  Pardon my language, but I am better than that.

I realised in 2011 that I was getting it all wrong.  That I was either shying away from doing things because of fear of injury (my horrible injuries in my past were mucking with my perceptions on what I could do today).  I was focusing on how amazing it was that I was doing stuff that people – years ago – told me I WOULD NEVER BE ABLE TO DO.  I was doing things out of FEAR OF WHAT MIGHT HAPPEN IN THE FUTURE, MAYBE.

My focus was either on the past, or the future.

And, that, my friends, is just a bunch of malarky.

I think I have spent my entire life either thinking I couldn’t do something, or being told I couldn’t do things.  I was always the last kid picked on PE teams because I was the slowest runner.  I have a lifetime of “can’t” and “inadequacy in sport” baggage that I carry around in my head.  I have spent years being told not to do things because THEY MIGHT HURT ME IN THE FUTURE.

That is crazy stuff.

I realised that when I do things (athletic things) I wasn’t really focused on doing them IN THE NOW.

I rode that mountain in Spain not focused on the feeling of my legs turning over in the here and now, but worried if my legs would stop turning.  Which, of course they did, because when you focus on the negative potential outcome, chances are it will start to dominate your thoughts and become an inevitable outcome.

So from April onwards I decided to focus on the NOW.  And the feeling of SUCCEEDING IN THE NOW.

Changing this way of thinking IS NOT EASY.  I have not always done it right.  Little negative monsters creep into my thoughts.

I have truncated longer runs because I have felt so spent and with such tired muscles.  I have eased up on fast 100s in the pool because I didn’t want to feel the pain of working hard.  When I thinking about all I was doing YESTERDAY, or how I might feel LATER, it distracts me from achieving MY BEST TODAY.

A new mindset takes time to cultivate.  Sometimes I have gotten it 100% correct.  Spot on.  Flying IN THE MOMENT and feeling ON TOP OF THE WORLD NOW.

Like at the London Triathlon.  When I focused quite simply on keeping my legs turning over, my head focused on the where I was at that moment – the race, the crowd, the breath I was taking, the second count of my run-walk interval – and that race and all of those moments were indescribably AMAZING.  When I realised I was close to the 3 hour 30 minute mark for an Olympic distance triathlon – which up until 2011 was the USA Paratriathlon National Standard for the women’s champ with a neurological condition – I FELT INCREDIBLE.  I think I actually skipped ON THE RACE COURSE.  Sure, my legs hurt. I was sweating buckets. I was hot, tired, uncomfortable. But MY UNTHINKABLE WAS BEING ACHIEVED AT THAT MOMENT.

Ask my friend Zoe. I have seen Zoe at two London triathlons in a row, on the run course. And this year when I saw her I exclaimed I AM DOING IT! 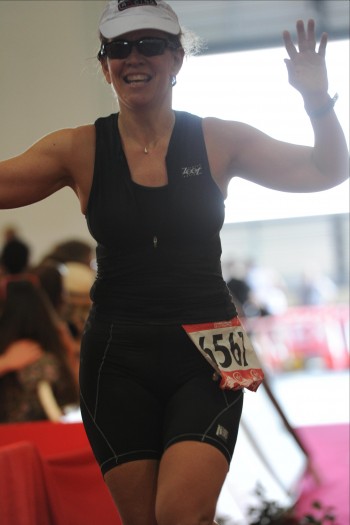 Doing it in the now

Through some painful experiences and self-realisations that could’ve broken the younger me, I learned that:

I NEED TO DO THIS NOW, FOR THE NOW.
WITHOUT AN EYE TO THE PAST OR THE FUTURE.
FOR ME, NOW.

Triathlon and its elements are just one of the vehicles I will use to focus on the awesome feeling of LIVING IN THE NOW.