Deciding not to do an event is not easy.  In fact, as I made my decision on Thursday to pull the plug on my participation at the Dorney Lake Women’s Only Tri on Saturday, I felt like I was killing a dream.  And then when I decided on Saturday evening not to do the London to Dunwich ride, it was like killing a dream deja vu.  Just awful.  I hated making this decision.

I rolled my ankle at Dulles airport on June 13th.

It was the day after the Bay Swim, I had arrived at the airport in good time.  Such good time that they changed the gate for my flight after they printed the boarding passes.  The topper was that they also neglected to update the departure screens.  I noticed this gate change only when I went to the gate about 5 minutes before the closing time as shown on my boarding pass.  I was told “Oh, this gate has changed, you need to get to A terminal NOW!”  With that, I sprinted off to A terminal, thankful that I had been taking my first steps running without ankle supports throughout May (as I did not have them on at the airport – I only wear them when running).

While sprinting to the train to get from C to A terminal, I confronted THE ROLLY BAG.  On my right, a woman with a baby in a stroller.  On my left, a kiosk selling I dunno, popcorn or something.  And then BANG in front of me, with nowhere to turn, a ROLLY BAG.  I braked as quick as I could, and felt my ankle just turn. All the way to the ground.

Here’s the thing about living with CMT – ankle strength is not exactly something we are known for.  One of the first muscle groups impacted by CMT is the peroneal, or ankle. 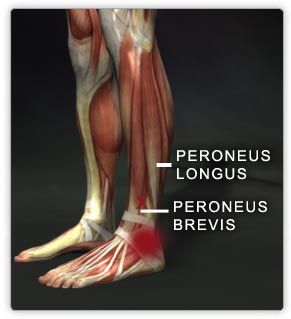 Image from the Train out Pain blog

The peroneal muscles (long and short) work to control the ankle and foot.  When they get weak, it can lead to easy ankle rolls.  For people with CMT, ankle rolls can happen even doing nothing!  I have spent a good deal of time working on ankle strength, helped tremendously by yoga.  My ankles have gotten stronger, but by no means are strong.  Lateral movement, sudden stops, uneven pavement…  All of that can lead to an ankle roll.

And that is what happened at Dulles airport.  A big old ankle roll.

Normally I don’t think twice when I roll my ankles.  I just shake it out and move on, and resolve to do more ankle stability work.  I don’t worry about it when running because I wear ankle/foot bracing (a light option, but support nonetheless).  Ankle rolls are just a fact of my life.  But on the 13th, my whole foot stung.  But I needed to catch a flight.  I shook it off, sprinted to the gate, got to the plane in time, sat in the air for 3 hours, and then, by 6pm, had a black and blue balloon attached to my leg.

I’ve been icing, wrapping, and being kind to my foot.  Most of the swelling has gone down – but I get a bit of inflammation in the evenings.  I started running on it again last week, after two clear weeks off, always icing after.  It does not hurt.

But something, something has been telling me to hold off.  To wait before running hard.

Decision Time: To DNS or Not to DNS

How do you even go about deciding not to do something that you want to do?  In a battle of heart versus head, I can tell you my desire to DO always outweighs my logical self.  I think this is an attribute – but it is one that I balance by trying to take a step back and really judge whether or not the risks I contemplate are actually SENSIBLE.  I decided to do something I rarely do when it comes to things that I like: I made a list.  Things for me to consider.

Back in November, when I was finalising my schedule for 2011, I decided to target the following things:

1.  To do the MS150, and with it Strong Like Bull, to give my early season a cycling focus and to force me to spend more time on the bike (becoming stronger) before tri season.
2.  To do the Bay Swim, as a single sport endurance challenge, because I wanted to.
3.  To do more than one standard distance triathlon (1500m swim, 40km bike, 10km run) in 2011.
4.  To go sub-4 hours in my standard distance triathlon as this is the cut off for participation in the USA National Paratriathlon Championships (a future aim of mine).
5.  To slot in the UK paratriathlon events if they would fit in my calendar – but not to stress about them, just do them as, if and for fun.
6.  To have fun with each event I do – I may not be the fastest but I certainly will make sure that I am the smiley-est!

With this in mind, I then looked at the reasons why I was doing the races, with of course the background of having an ankle/foot that is not 100% at the moment, to make my decisions.

Why was I doing the Women’s Only Tri?

There were a few keys reasons why I signed up for the women’s only tri:

1.  I wanted the option to participate in August’s Hyde Park ITU paratriathlon event.

I knew that to have the option of participating in the Hyde Park ITU paratriathlon event in August, I needed to demonstrate I could meet the 2 hours cut off time.  I made this at the Egg Hunt Triathlon in April.  But I missed this at Blenheim.  Dorney Lake is a flat course where I would be able to go hard and meet the time goal.

If my ankle was ok.

2.  I felt strong at Blenheim.  It gave me a taste for racing, and I didn’t have a race in my July calendar.  Adding the Women’s Only would be good prep for London at the end of July.

Unless running hard to meet the time goal would mess up my ankle more, and then that would kill my London time goal.

Straight away you can see how my reasons either didn’t stack up with the logic behind my original choices for my 2011 races (slot in the paratri races if they make sense).  And that I had a lot of risk associated with my reasons for racing because of the ankle roll I did on June 13th.

So I emailed the organisers and informed them that I could not race.  I felt awful and was a horrible grump on Saturday morning (race day).  To make up for it, I took myself to yoga to start to rebuild my ankle stability.  DNS means Do Nothing Stupid, and to that I raised a glass at Saturday lunch.

Why was I doing the London to Dunwich ride?

The London to Dunwich overnight 200km ride is often described as a rave on a bicycle.  I read about it years ago in The Guardian.

I had to make a list.  Because for this ride, more than the Women’s Tri, there was more heart involved…  And that heart needed a good strong dose of logic to make the decision to DNS…

1.  I signed up for Dunwich because I wanted to do a big ride with my friends.

My friend Jon suggested we do the Dunwich Dynamo as a birthday challenge for me.  A bunch of us would do it together, through a summer’s night.  It would be the experience of a lifetime.

I’ve done a number of rides, but never with a large group of friends.  And through the night?  To enjoy the best of the British summer?  And with the destination right around the corner from where I have been riding all year?  It would be perfect…  I could head back to our family’s cottage after and get breakfast.  I could take a shower and relax and celebrate my accomplishment.  I could see it clearly…

But 200km, at a slow pace through the night, could really mess up my ankle.  It was swelling after an hour and a half on the trainer last week.

2.  Because time on the bike has been helping my running.  And making me faster overall.  Which would benefit my triathlons.

Although making the choice to pull out of a race is hard, sometimes impossibly so, I discovered a few things in the past few weeks.

First, I think it is important to know why you sign up for a race – for fun? For a time goal? To be with friends?  This helps if you ever have to revisit actually doing the race or event.  You will know why you were doing it and it will be easier to assess if there is any logic in continuing to do it or if doing it poses more risks than you want.

Next, if you are signing up for lots of events (like I do – I just like to participate in things, what can I say, and events give me a reason to keep going to the gym), it really helps to have a logic behind your calendar.  If you don’t make one up front, then choose after the fact which races or events are key.  That way, you know what will help or hurt you to reach those key milestones.

1.  DNS (Did Not Start) actually means Did Nothing Stupid
2.  That I am in this for the long haul

It sucked making these decisions.  But I have to keep in mind that for me, this is not just about a single race.  I do not race to race.  I am racing, and training, so that I can race and train for a very long time.  And losing training time due to injury is just not smart.

With this prism it all seems clear.

And it makes me want to race event better at the end of July.  Now, my ankle just needs to cooperate with my mind to make it happen!

One response to “Pulling the Plug: DNS means Do Nothing Stupid”