On Saturday I went out and ran 5.75km.  Now, that may not seem long to many people.  But in all honesty this was my longest run since I did the Egmond 10.5km run in January.  Yes, I have done two sprint triathlon runs, of 5k each, since then.  I’ve done runs off the bike – some without my ankle supports too.  But I have not run more than 5k.

Of the three disciplines that make up triathlon, the run has always been my weakest.  At the beginning of 2011 I was determined to give it more attention, seeking specific rehabilitative exercises from my neurophysiotherapist, so that I could “get run strong”.  But, let’s face it, my focus was first on cycling (for the MS150) and then swimming (for The Great Chesapeake Bay Swim).  And of course with my “I’m gonna pretend I’m OJ Simpson and run through the airport” antics on 13 June, and my resulting ankle roll (no, I am not OJ Simpson), well, let’s just say that before Saturday, I was not where I wanted to be with running.  Especially as I am doing the London Triathlon in 2 weeks time… Two weeks!

In June, knowing I needed to “fix my running”, I began working with James Dunne of Kinetic Revolution.  I am not going into details in this post (James deserves his own post, once I have well and truly had a chance to work with him for a while and reflect on the work and results).  But let’s just say that Saturday was a test – a test to see how the work is working.

(that’s all I’m going to emoticon on the subject!)

Saturday was also a chance for me to trial a few things for the London Triathlon.

Dry Run (in the rain) for the London Triathlon

First, what I think will be my running strategy for London:  about 2.3km running, followed by a 2 minute walk break, then repeat.  Four times.  This mirrors the London Triathlon course (four loops) and I know exactly where I will take my walk break (right at the first aid station out of the Excel Centre).

Next, I tried out how I will protect my feet and ankles for wearing my ankle foot orthotics during the 10km.  I have been having huge issues wearing compression socks – they definitely protect my calves (from rubbing with my ankle braces) and compression feels great on my calves, but the blister patch I was developing due to bizarre rubbing with my ankle brace… Well, let’s just call the blistering “unsustainable” shall we?  Anyway, knowing I needed to find a new sock solution to save my skin, and that putting on compression was eating up too much time in transition, I decided to do something “radical” – I wore normal running socks. 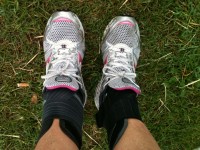 The verdict?  Both the run strategy and the sock strategy would appear to work for about 6k!  So, this week I will put them to the test again, aiming to run 7k or so as my last longer run in the build up to London. Fingers crossed for another trial success.

Saturday also gave me a chance to participate in the #DIY5k challenge.  I love the idea of being able to join a community of people who want to give 5k a go – at any time, any place.  And this month the challenge also included a photo scavenger hunt.  Now, given that it was a rainy Saturday morning in London, I can’t say that my photos are “the best” – but at least they give an idea of the things I see in the fields where I run.  I couldn’t find everything on the list, but I got some of the items.  (Note: I took all the photos after my run, on my cool down walk through the park.  Didn’t want to mess with the run or sock strategy and testing!)

The man-made path, both the start and the finish of my 5.75k run 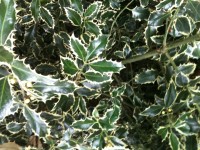 Green! In abundance, on a rainy summer day in London… 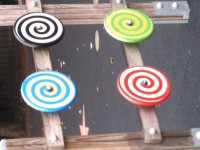 Round optical illusion spinning wheels at the playground in the fields. 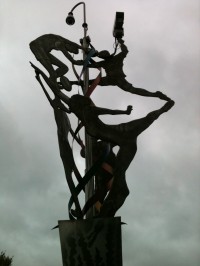 This is a statue in the middle of the fields, I think it looks like they are slam dunking the CCTV camera, or hanging on the lightpost. 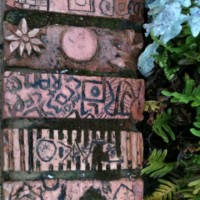 Grafitti on bricks in the park.

By my count I snapped 7 of 13 concepts on the DIY5k list. And the added extras of the “art” we can find everyday in London!

The verdict on my run?  I was beaming on Saturday.  I feel optimistic about London.  And with more time to build up and strengthen before the end of August and the Fireman, I am feeling happier with the idea of running the coastal rollers in Maine.

And I am optimistic about running.  I felt good, strong and most importantly – I was able to walk, function, and train normally on Saturday.  Without much residual effect in my legs.

That is the first time in a really long time I have felt this way after a run. Finally.

One response to “The #DIY5k: My Longest Run Since January”