In April Erica posted on Twitter that she was making hot cross buns for Easter.  I asked if I could have her recipe, made it twice (once on Easter and once recently for an afternoon tea snack when friends came over), and asked if I could publish it on my blog.

The recipe is delicious.  And easy.  I always like to try to make my own rather than buy from the shops.  With a little bit of forward planning this is perfect for breakfast or tea, and as Erica says the buns freeze and toast nicely.

I have added my own comments (as usual) in italics throughout the post.  And some photos of the second time I made them.

Thanks Erica for the wonderful recipe!

I find this makes between 12-16 buns depending on how large you want the bun to be. The buns freeze very well. This recipe has evolved in the last few years from one from my mother used and taught me when I was quite young. I used that as my starting point and added in elements from other recipes I’ve come across. I’ve pulled together my notes and scribbles to send this to you, a good exercise for me.

400g bread or spelt flour (makes a heavier more bready bun but I prefer it). You can substitute white plain flour and it makes a more cakey texture, similar to a chelsea bun.
Note:  I used plain white flour for mine, as I didn’t want the heavier texture.
50g sugar (I usually use castor sugar but granulated works fine as well!)
1 teaspoon sea salt
1 teaspoon ground cinnamon
½ teaspoon freshly grated nutmeg
3 cardamom pods (optional)
60g unsalted butter diced
500 ml hot tea (something strong I use Assam)
Note:  I used Earl Grey as I like the flavour of it
300 ml tepid milk (whatever sort of milk you have to hand and usually use)
1 large egg (beaten)
180g dried fruit – a mix of currents and raisins works well but I generally use whatever mix is in the jar in my kitchen (you can use 150g dried fruit and 30 g of candied peel if you prefer)
Note:  The first time I made this I used the correct proportion; the second time I halved the dried fruit – both ways were yummy.
7g of dried yeast

If making Hot Cross Buns…  For the pastry cross

The night before you want to make the buns weigh out your dried fruit (not the peel if using) into a bowl and make 500 ml of strong tea. Once the tea has brewed pour it over the dried fruit, stir and cover. Leave overnight and until you are ready to make the buns.

The fruit won’t absorb all of the tea probably but most of it. 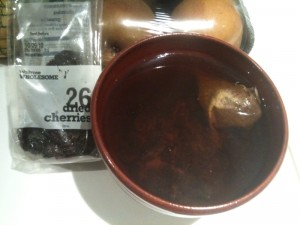 Soaking fruit overnight in tea is traditionally done when making bara brith (welsh fruitcake) and I grew up in Wales and the tea fruit soak has crept into almost every fruit cake or bun I make. It not only makes the fruit soft and juicy but adds a richer flavour to the end product. And switching the tea you use makes a difference as well.

When you are ready to make the buns drain your fruit and pat it with a clean tea towel to remove any excess surface liquid. You don’t to have it perfectly dry but drying it a little helps the dough form, otherwise it can make the dough sticky rather than soft. You can just soak the fruit in hot water if you prefer. 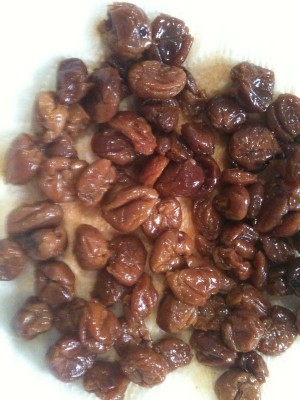 I have a Kitchen Aid mixer which I chuck everything into and it makes a lot easier but you can do this by hand. I certainly grew up doing it that way. The recipe assumes you are doing it by hand.

Note:  I did steps 1-3 as described.  For steps 4 through 8 I used my bread machine, following the instructions for the order of ingredients on a dough only setting.  It was very easy.

1. Warm the milk and cardamom pods (if using. I am a big spice fan and I like the extra kick of flavour this gives the buns but it is not necessary.) until the milk is tepid. Leave until needed.
2. Put the flour, sugar, salt, yeast and spices into a large bowl. Mix well.
3. Add the diced butter and rub into the flour until the mixture looks like fine breadcrumbs.
4. Mix in the dried fruit (or fruit and peel) then make a well in the centre of the mixture.
5. Strain the milk (if using cardamom pods) , otherwise just pour into the well and add the beaten egg.
6. Gradually draw in the flour to make a soft but not sticky dough. Add extra flour a tablespoon at a time if too soft or a little milk or water if too stiff. Pre-soaking the fruit helps keep the dough soft rather than stiff and heavy.
7. Turn out onto a lightly floured work surface and knead thoroughly for 10 mins (I find the dough hook in my kitchen aid a wonderful thing at this point and it certainly takes less time in there probably five minutes is fine!).
8. Return the dough to the bowl and cover with plastic wrap or a damp tea towel and leave to rise in a warm spot until doubled in size. About 1 and ½ hours.
9. Turn out on to a lightly floured work surface and punch down the risen dough a couple of times. Form the dough into a ball.
10. Divide the dough into 12-16 equal pieces. Shape each into a ball and set well apart on the greased trays. Cover with a damp cloth and leave to rise, until doubled in size. 45 minutes to an hour.
11. Meanwhile preheat the oven to 200C (390F) or 180C (350F) if using a fan (convection) oven. 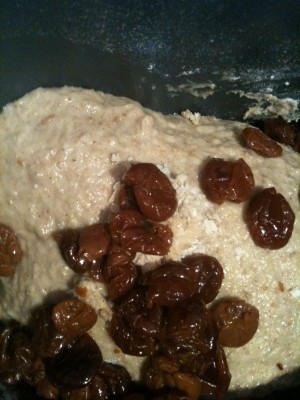 Shots of the ingredients in the bread machine – so easy!

And the risen dough, before step 9…

This is fiddly but is the most satisfactory way I’ve found of getting a cross on the buns. You can score a cross in the buns (which is what my mother did) and leave it at that but I like the finished look of the pastry cross. My father was a chef and while I am very much a home cook and not given to flourishes I think I have something of my father in me when it comes to finishing touches on cakes.

Note: When we made the buns on Easter we just scored a cross which worked ok.

1. Put the flour, butter and sugar into a bowl.
2. Rub the butter into the flour until the mixture looks like coarse breadcrumbs.
3. Stir in enough cold water to make firm dough.
4. Roll out the dough on a floured work surface to be about 3mm thick.
5. Cut into strips about 8-10 (8 cm if you are going for smaller buns and 10 if larger) cm long and 6mm wide; 2 strips per bun (you may well have a little dough left over I always do).

(if making hot cross buns, steps 2 and 3)
2. Brush the pastry strips with a little water to dampen them.
3. Arrange sticky side down in a cross on top of the buns.

4. Bake in the preheated oven for 15-20 mins until golden brown.
5. Meanwhile prepare the glaze, heat the milk and sugar in a small pan until dissolved and then boil for 1 minute until syrupy.
6. As soon as the buns are cooked lift them out onto a cooling rack and brush immediately with the hot glaze. 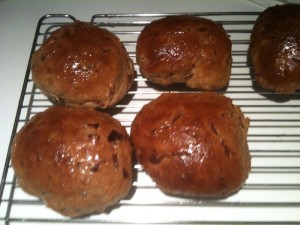 Glazed, warm, and ready to be devoured! Chelsea Buns with Earl Grey Cherries.

Eat warm or toasted and like I say they freeze really well.

A special thanks to Erica for this recipe – it received high praise from both my family and friends!