On Sunday I was in Antwerp to support DH as he did the Antwerp Ironman 70.3…  It was his first half iron, his first half marathon, his first time in Antwerp.  And my first time being a “sherpa” for a racer at a big event.  I lived tweeted the event.  Below is a rebroadcast of the day, as seen on my Twitter stream.  I have asked DH to do a guest post about his experience.  He will eventually get around to it – once he is done celebrating, recovering, and feeling like sitting down and writing!  I also plan to do a separate post on my takeaways from the day (aka tips for supporters at big events).

The Antwerp 70.3 As Seen On My Tweetstream

Good luck to everyone racing this weekend: Outlaw, Antwerp, Lake Placid… You all inspire me to keep training even if I feel tired!

Locating forgotten items for DH and his first 70.3 triathlon.  Packing a cow bell (thanks @angelinadrljaca) and @FirstEndurance Ultragen too!

DH just called wanting to know if there was anyway I could get to Antwerp quicker. If only, the process of travel is such a drag!

Feels like someone turned off summer in Belgium too. #notjustengland! Perhaps good for racing, hope just a bit warmer!

Thank goodness DH likes the hotel I found in Antwerp. I was a bit nervous… The courtyard garden is lovely…

Waving good morning from Belgium, especially to @EJVNL and @pinkypie who are next door in The Netherlands – so close but so far!

Triathlon morning: like the meeting point for a big swinging dick convention. Uniforms? Lycra and M-dot tats. So few women at Antwerp 70.3!

Oh the smell of carbon in the morning!

Always nice to see @ThamesTurbo out in force at a race! Will be ringing my cowbell for you guys!

Most badass set up: awesome woman on yellow Dutchie bike! With a bell! And paniers!

It’s a cool day in Antwerp – perfect for racing (except for the “breeze”). Chilling out to Jamiroquai, enjoying being a tri-sherpa today

Chatting to Japanese couple in my rusty Japanese. He’s racing. They are both cold. Gloves on girlfriend. Mighty chilly.

24 countries represented. 364 people from the UK.

The energy at Antwerp 70.3 is impressive. A very cool and friendly start atmosphere.

6 hand cyclists at Antwerp 70.3 today. All lined up and ready to start!

Wow!  There are people breast stroking. Goes to show it’s about getting it done however you can!

DH’s swim wave about to go. Just wow. Even my adrenaline is surging!

And DH is off! Found @uktricoach too! Good luck racers!

A racer is doing his 404th race today! Holy wow!

Paul Thomas out of the water! Oldest in hand cycle category at age 50, Paul runs with sticks. He has CES. Go Paul!

Here is DH before the start. So proud he lined up after a series of injuries. Hamming it up as usual. 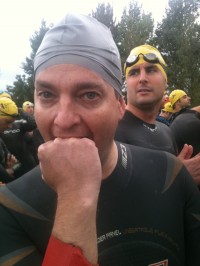 Transition at Antwerp 70.3 is long, but with a good view for spectators. 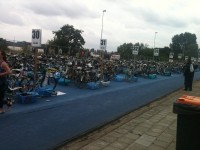 The water looks silt ridden. It’s the only explanation for bearded women at T1.

Chilly day. Saw the first rider with shoe covers on for the bike.

DH in transition smiling and taking it easily. He’s calling it “comedy transition”, towelling off and joking around. Having fun!

Honestly number 909 you thought the towel covered you in transition while you changed. But it didn’t. Just ick.

Love it. Kids on scooters following dads on side of transition yelling “Allez Papa”.

The run course is fairly impressive. Three loops of this. 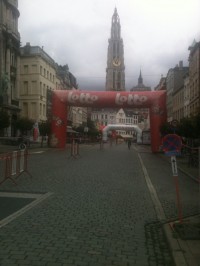 To give you a feel for run course: 3 loops around the Grote Markt, this bit cobbles. 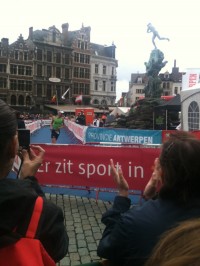 The first London kit I saw on the run course was a speedy girl racer from Ful-on-Tri. Saw her run like the wind at Jekyll&Hyde2010 too. 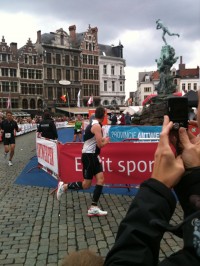 Holding a minute of silence while people are crossing the finish line? I feel sorry for athletes. Do it at race start.*

And… is it usual to have pro awards with speeches while race is still goiing on? My first WTC event – honest question.**

Brilliant! Age grouper on course running with a cupcake in each hand!

Times of my friends about 20-30 minutes slower than expected. Suspect it was windy on the bike today.

DH is on t he run. My tweet frequency is lower as my batteries are running low! Hope he’s bearing up ok – wind and sun now.

Just met @suzyspaatz after more than two years of tweeting together!

Someone asked me to cheer for Alice 440 – she finished in 6:19 smiling

And just met @ironrav finally too – showing off his tanlines!

This. This is why triathlon rocks. Paul Thomas, lap 3. Awesome. #thatisall 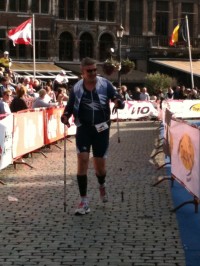 DH is on his last lap. So proud of him.

DH crossed the line. He’s shattered. Big emotions at the finish line. So proud of all the finishers.

Managed to hand DH a flask of @FirstEndurance Ultragen cappuccino with strict instruction to go mix with water and drink ASAP.

Make no mistake: supporting a race is hard work. My peroneal tendons are on first from standing / walking all day! Loved it tho.

I officially declare that my sherpa duties do NOT extend to bike breakdown and packing.

Absolutely tragic a racer died yesterday at Antwerp 70.3—crashed in tunnel to town. DH saw it, said it was a bad crash, dangerous riding…

…He said he was going 50kph, completely surrounded, people yelling all around. Said the tunnel was the whole reason he’d avoid Antwerp 70.3.

Other race reflections: the bike experienced gale force winds. Everyone I saw commented they had never looked forward to the run so much!

Things the sherpa (aka me) forgot to do last night: rinse the wetsuit. Oh the smell!

DH celebrated his Antwerp finish at lunch today. Nothing like a grilled lobster treat! #DH8this #i8this too 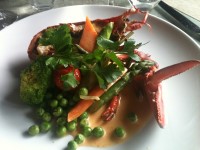 Day-after triathlon sherpa duties continue: bandaid on yucky toe. Let this be a lesson, well cut toenails are a requirement for distance!

I thoroughly enjoyed my weekend: lovely hotel, great meals, so much fun spectating a big triathlon event, and supporting my half iron man

Fact: @oakley shades do not trigger airport scanners. Left mine on my head by accident and sailed through!

Apparently my triathlon sherpa duties extend until after dinner tonight… But so far I’m told I’ve been quite an asset to the experience!

So tired. About to watch DH walk upstairs. Final triathlon sherpa act: ensuring he makes it to bed

DH returns the favour on Sunday!

DH to me: “You’ve been such a great sherpa that I’d like to inform you that we’d like to offer you a lifetime appointment to the role.”

* It is possible that the moment of silence related to the racer who died on the course – but I assumed at the time it was related to the Utoeya tragedy in Norway, thus my tweet to hold moments of silence at the start.  The race announcer only announced the moment of silence in Flemish.  My tweets about the sad accident were not meant to imply that the racer was riding dangerously, merely that DH thought the overall safety and riding atmosphere in the tunnel was dangerous.  The tunnel was narrow, went from bright to dark quickly, riders were greeted with whistles and arms waving, and apparently the management of the accident was chaotic.  I expect this will be looked at by the officials.  My deepest sympathies to the family of the racer.

** The answer is: Yes, it is usual to hold awards while races are ongoing.

One response to “Antwerp Ironman 70.3: As Seen on Twitter”