At the end of January I attended a workshop on goal setting, by Josephine Perry of Performance in Mind. It was a great talk for lots of reasons, not least of which that it helped me to frame my 2016 plans.

It has been hard for me to think about 2016 knowing that I am injured and still not “right”. In addition to managing my ongoing knee problems (a constant theme since January 2013) I now have a torn shoulder tendon to think about. So Josie’s tips for goal setting while injured really resonated with me.

As much as I would like to jump in and announce big lofty plans for my 2016 season I think I need to take a step back and admit that what defines a successful season for me is just managing my way back from and through my injuries. Rehab is the goal. Full stop.

Well… I do have some dreams in the back of my mind fuelling the work.

I have signed up to do the 5km Defi Monte Cristo swim again in June, hopefully this time without a wetsuit.

In support of this dream goal, I have signed up for swim camp in Croatia, have upped my personal training sessions to twice a week, and can regularly be seen doing scapular push ups on my kitchen counters.

I also signed up for a season pass for the swims and aquathlons at West Reservoir hosted by Capital Tri. The season pass includes weekend swims in the reservoir. Hopefully I can find my bravery to get in the water in May this year to start to build up my cold water stamina.

In an ideal world my paratriathlon season would include four of the London League events as well as the Triathlon England national race and the ITU Open Paratriathlon World Championship race in Rotterdam.

But we know that the world of managing chronic conditions like CMT and EDS can be far from ideal, so I am equally putting my efforts into the non-racing side of the sport, laying the foundations for grassroots paratriathlon in the London region. I have some preliminary ideas in the works, and have started to reach out to and build bridges with the London triathlon community. There is huge potential here, and the opportunities energise me (dare I say more than racing?!). Even if my own season winds up derailed, I see so many ways for me to be involved with (and grow) the sport.

And in the meantime, I continue down rehab road. I can definitely tell that my cortisone shot is wearing off as I feel a shoulder ache after hard training. But the ache is different now – not so much pain as sore muscles, and not on the front side of my shoulder, but in my lats and around my scapula – where the ache should be… Finally, after feeling no power for so many months, my lats are firing again! And I was able to last a full swim session with only a few workarounds last week. Plenty of upside!

And my bird dogs are getting pretty good! 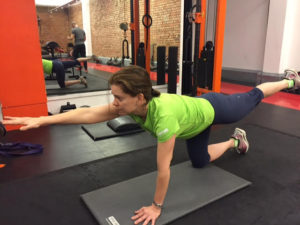