When it comes to paratriathlon, I believe. Triathlon – and my participation in it – has given me what I really believe is a second chance in life. A chance to be active and healthy and MOBILE well into my future. I am a huge supporter of triathlon for all – having written here and on various social media sites about the need to have grassroots mass participation evolve to include EVERYONE in our sport.

I always say when you believe in something, you gotta put your actions behind your words. I participate in paratriathlon – lending my strokes and steps to the mass participation movement. From being a part of Open PC categories in the US, to promoting and participating in the London League efforts to support paratriathlon, I back up my words with action.

But action is more than just writing to support paratriathlon, it is more than lining up to race. Action means supporting the sport however you can – including helping your friends in their pursuit of excellence, and cheering on every athlete to grow the spectator side of the sport.

On Saturday I had the pleasure of being on the other side of the start line, acting as race sherpa for my friend Allysa.

I love a good race. The PT2 women’s category – Allysa’s classification – was a phenomenal race to watch. The Finnish athlete Liisa Lilja was truly amazing. She was what I can only describe as a natural talent. I was incredibly impressed with her run form, she appeared effortless in comparison with so many AK amputees I have seen racing. She was fast. Strong. And it was only her second ever triathlon. Oh to be blessed with that kind of gift!

And I felt like I was able to be a part of it too, in a totally different way that I have experienced triathlon in the past.

Allysa and I decided that on both the bike and run I would give her counts – not of her laps (every athlete should count their own laps) but of her competition. How many athletes were in front of her. And what the time gap was to the next athlete in front. I found myself standing next to the French delegation and the Finnish delegation, shouting out splits. Allysa become “my” athlete. I felt completely invested in the race.

Allysa took third place on Saturday, a hard fought race and a hard fought result. Everyone should be so lucky to see this level of competition in any sport. The future of the PT2 class looks bright, and the Road to Rio will not be easy for these women! 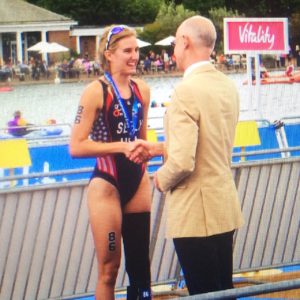 I wasn’t the only paratriathlete out supporting. On the run course I ran into James Smith and Tom Perkins. I had the opportunity to meet both of them way back when I attended the British Triathlon Paratriathlon Open Day at Loughborough University in 2010. Five years ago – time flies! 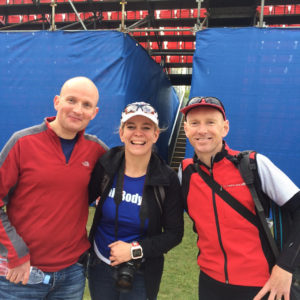 In order for paratriathlon to succeed it needs support on all levels. Participation – at the elite and grassroots levels. Inclusivity – in our clubs and in our leagues. Support – on the course and behind the scenes.

If you believe, here’s my challenge to you. Put action behind your words.