Have you ever been asked “How was your race?” and had no idea what the other person was talking about?

Embarrassingly this happened to me on Tuesday in pilates. You see, DH and I go to the same pilates instructor and on Sunday we did a swim. Well, he raced. And I had a nice paddle.

On Sunday I just wanted to go out and enjoy a long continuous swim in the Thames. Low effort (70% max). Easy strokes. A nice way to start a Sunday.  DH on the other hand went out and wanted to race. 3,650 meters of race. Hard effort 90% the whole way.

I had a lovely swim on Sunday. Except for the guy that bashed me three times because he stank at swimming in a straight line, and who I yelled at rather forcefully to “Stop messing up my swim!” The Hampton Court swim was a good day out for me. Without any effort I managed to slice six minutes off my 2010 time. And it felt so much easier than 2010. Turns out that training over the past four years paid off!

And DH? He killed his race. He took 10 minutes off his 2010 time, which is simply phenomenal. 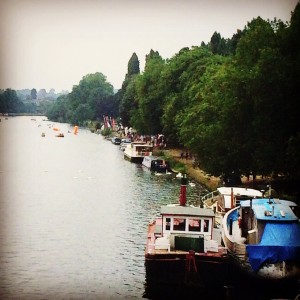 The Thames on Sunday. A nice place to enjoy a splash around in the water.

Keeping it in Perspective

When it comes to racing, it really is about perspective. DH’s race was my enjoyable swim. We all have our goals and our approach to the events that we do. On Sunday my aim was to simply have fun – and not have a single race element in the mix. It was a great day for me.

Since I have been back from Chicago I have eased back into training. Being ever mindful of my knee. But training. And keeping things in perspective. And while I’ve been back training, I’ve been thinking. Why is it that I am doing triathlon? What are my aims? Nothing like a bit of in-almost-end-season reflection!

Aim 1: Get a little bit faster.

I know that to get faster I will need to train faster. So more speed sets in swimming. A bigger base on my bike, coupled with a lot of high intensity efforts. And running? Well, I just need to save my knee with my approach to running so I may never get fast there. 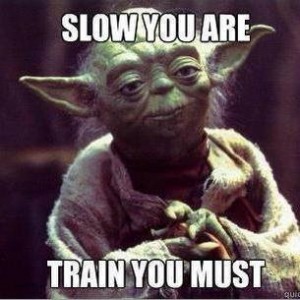 I found this on someone’s feed on Facebook or Twitter. Slow I am! Train I must – but not just because I’m slow!

Is this what I have been doing since Chicago? Yes and No. I’ve been training how and when I can, doing what fits and letting go what doesn’t. I’m still trying to find the optimal work-training-Felix-life balance and schedule. I’m getting there. Not as fast as I’d like, but I’m learning. I’m convinced when I find the right balance, the right pattern, the improvements will start to shine through.

I do triathlon because I like to. Because it is fun.

London Triathlon is coming up in about 10 days time and I’d like to string together a good-for-me performance. But more importantly I’d like to have a lot of fun out there. It’s my hometown triathlon, the one where it all started. But it’s also where I DNFed the last two years.  I’d like to go out, have a blast, and race with a smile. Hopefully my performance – and my first finish on the course since 2011!! – will follow on from that!

Aim 3: Commit to triathlon for just a bit longer.

I had thought that London Triathlon would be my last triathlon thanks to my knee issues. But with classification and doing my first ITU elite paratriathlon race, I decided that I’d like to try to do a few more ITU races before hanging my shoes up for good.

I’ve already made a few decisions about what comes next – I want to get a TT bike, I will commit to a solid off-season of cycling work. and I am putting my name forward for a few ITU start lists for the rest of 2014 and early 2015.

A bit of summertime perspective and reflection – and deciding not to hang up my racing shoes just yet – makes me happy!