The last time I published a “paratriathlete diary” it was to mark the launch of USA Triathlon’s Open PC division back in February. I geared my whole season to participate in Open PC races, registering for the open division at the Egg Hunt triathlon, CapTex triathlon, and Chicago ITU race.

I prepared myself mentally for the same outcome as 2012 – when I was deemed not impaired enough to race as an elite paratriathlete. Yes, the system had changed. But the communication about the new system had been sparse. I had worked with our paratriathlete representative to the ITU Clare to put forth a position paper about factors to consider in neuro classification, but we never received any follow up to our submission. And my amazing neurophysiotherapist Gita Ramdharry had generously volunteered to help the International Triathlon Union committee reviewing the classification system (she was the chair of the Association of Chartered Physiotherapists with an Interest in Neurology) – but she never received a response either.

Before the classification I asked that the Team USA paratriathlon team manager Travis Ricks join me. It is important to have someone with you in classification, to witness and take notes for you.

I confessed to Travis:

“I’m not optimistic – but thank you for giving me the chance to be classified, to be considered to represent the USA no matter what the outcome is.”

Me and Travis after the medal ceremony in Chicago

With that I walked in to classification. I kept an open mind, and did all the tests that I was asked to do, to the best of my ability. In summary:
– there were bench based tests which looked at range of motion and power: I scored fairly high (4 or 5 out of 5) on pretty much all of these
– there was a new range of motion test compared with the previous system – ankle dorsiflexion: as someone with CMT and reduced dorsiflexion I scored a 2 on this
– there were dynamic balance based tests – thinking standing jumps: I am definitely not Michael Jordan
– there was observation in sport: I was observed cycling (on my bike on a bike trainer) and running (on a treadmill) – a HUGE improvement from the previous system
– there were other functional tests like single legged calf raises: this made me laugh!
– there was an interview of what my challenges are: word to the wise – if you make exaggerations or mistatements here, it will be found out in race observation, so just don’t, for the sake of our sport!
– all of the results are then combined and grouped by movement and function to create a score per sport, which is then weighted in accordance with how much proportional time is expected to be spent in each discipline – to give a more representative score for triathlon rather than a static score per sport or a static score not even considering sport (which is how the old system functioned)

In general I found the system improved from my last experiences in 2010 and 2012. Do I think it catches all of the challenges of a neuro condition? No. But I think that is because some of the key issues – like fatigue which impacts function and performance – cannot be measured. To create a level playing field, only that which can be measured can be used to establish a transparent and verifiable score.

It’s worth noting that classification is not finalised until observed – so the classification panel had the chance to see me in action on race day. So through the combination of the new system, plus observation in the testing environment as well as race environment, makes me feel satisfied I was given a proper assessment.

And the assessment was that I am able to compete as a paratriathlete. That I meet the minimum impairment threshold to race as a PT4 athlete. My score for those of you interested was a 538.68 (max score for inclusion is 557.0).

And then Travis gave me my Team USA tri suit. 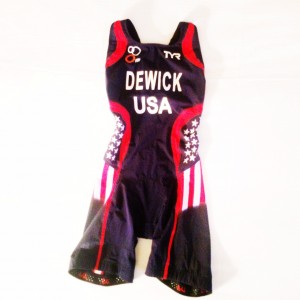 And I could not stop smiling. Which in some ways is a really strange reaction, as basically I was happy that I was deemed disabled enough to participate in parasport – but we won’t get into the psychology of my reaction in this post!

So what are my takeaways from classification?

First, as I have said many times, classification does not validate (or invalidate) the challenges that an athlete with a chronic condition faces. For example, Ehlers Danlos is explicitly excluded as an eligible condition for parasport. But does this invalidate the issues that EDSers face? No it does not. It simply means they can not find an evidence based system to measure impairment in a way to be included in elite parasport. And that is why PC Open exists – as an option for anyone with a challenge and condition to participate in paratriathlon.

Next, Is the new system perfect? Well, no, probably not. For example, in the wheelchair category there is no distinction made between athletes with core strength function who can walk versus those who are paralysed in the legs and core. And in the visually impaired category the factoring system to try to level the playing field between partially sighted and fully blind is also something that has been discussed at length. I certainly feel like the degradation of my performance due to neural fatigue from CMT that happens over the course of a race cannot be measured and captured in my classification. But I am okay with that – the purpose of classification is to have an evidence based measurement system to enable like-for-like competition at the elite parasport level.

Finally – we have to start somewhere. With the new system we can now improve it and hopefully attract more people into paratriathlon. It is now a numbers game. We need numbers to ensure continued inclusion in the Paralympics. The focus has got to revert to grassroots development and participation to safeguard the ability of athletes to compete at the highest levels possible. It is a start.

And for me – and for paratriathlon – it is the starting line that is important. Let’s see where the course take us!