Over 10 years ago I got interested in food.  Not just eating – I had been a lifelong adventurous eater, open to trying anything and everything, loving the experience of eating not just the function.  No, when I say interested I mean “interested in food for health”.

It all started when my best friend and I went on a trip to Thailand, to a spa resort. While there, we decided to “get healthy” and did a three day cleanse, to “detox ourselves”. Basically, this was a three day juice fast. It was hard going, and I swear I smelled like a hospital as a result of it. But I did feel remarkably fresh after three days of fasting followed by super fresh food (the salads were to die for!).

I got home from that trip and got a juicer, and a fab book called “Juicing for Health” (back then it was one of the few books available on juicing, but today there are hundreds of books out there so I won’t even bother linking to it). I learned about food and its properties through that book, stuff like lettuce being a natural calming agent and the fact that if you have trouble sleeping, lettuce juice might help.

In January 2004 as a precursor to walking the Moonwalk in May, I decided to kick start my training with a “detox”. In my local health shop (Spitalfields Organics) I randomly picked up a copy of “Detox Yourself” by Jane Scrivner.

The book was holistic – not only about diet but also about caring for ones body. Dry brushing of the skin to stimulate blood flow. Hot lemon water in the morning to wake up the kidneys and liver before eating. Self massage. Magnesium salt baths. I embraced the plan wholeheartedly, willing to give it a try, to see if I would come out the other side feeling refreshed and at the top of my game to tackle walking 26.2 miles.

On day 21 I decided I had detoxed enough – following an 8 mile walk I wanted chicken for dinner – the first time in the 3 weeks I had been going that I had a serious food craving. I took it as a sign, and 7 pounds lighter and feeling a lot better for looking after myself, I ended my detox.

In 2004 while training for the Moonwalk I received my diagnosis of Charcot Marie Tooth disease. My friend Lydia, my walking partner for miles and miles as we got ourselves into a place to complete a marathon, suggested that I visit a woman she had met, Vicki Edgson.  Vicki was a nutritionist, one of the founders of The Food Doctor business.  She might be able to help me to understand better how to eat for my health.

So I made an appointment, and learned from Vicki the ways in which food could stimulate the body. I tried a few different ways of eating at that time. No red meat, no cow milk. I felt good from giving up the cow dairy, but I found myself craving steak. So I went back to eating meat, but focusing on less fatty cuts. I food journalled to see if there were any habits we had at home that were not very healthy – turns out that keeping a tub of ice cream in the refrigerator was far too tempting for us. And I slowly found my way to a place of balanced eating.

Since 2004 I have regularly visited Vicki, to reboot my health. I know that what I eat directly impacts how I feel – both mentally and physically. I also know that in the winter time I need to especially focus on cleaning up my diet, to boost my overall feeling of health as I usually enter winter feeling run down and fatigued.

This year I visited Vicki in December, following 6 weeks of nasty virus which saw me on antibiotics. Besides a general fine tuning for me, we also discussed DH.

For the past year or so DH has been struggling with his stomach. Starting with norovirus and then a course of antibiotics, he has been plagued with cyclical bad stomach feelings. About every 4 to 6 weeks he feels ill. His GP suggested it could be candida overgrowth in his gut. But the anti-fungal diet plans have just seemed so restrictive that we hadn’t wanted to go down that path. Since I read It Starts With Food I have been thinking that perhaps we should do a reboot, particularly cutting sugar, grains and dairy to re-set his system.  Having a bad stomach is something that we both want to fix – it is exhausting and just no fun for both of us.

Vicki was on board with helping to clean up both our eating habits, and suggested we do a food intolerance test to point us in the right direction.  So we did just that.

Food intolerance testing has chequered feedback.  The most common testing done in the UK is the York Test.  The York Test uses a blood sample to screen for Immunoglobin G – an antibody in the blood produced by interaction with a food substance.  The research is patchy at best – is IgG testing a lark, or a good way to establish food intolerances?

As with so many things when it comes to nutrition, there is scant science to support using IgG testing as a way to “solve” stomach issues. But I have resolved to have an open mind when it comes to food and finding the right balance for me.  Knowing that Allergy UK had at one stage endorsed the York Test as a way to problem solve IBS, I decided it was worth a shot.

After all, it sucks to feel stomach sick at the Christmas dinner table when everyone else is having a good time.

My York Test results did not surprise me. 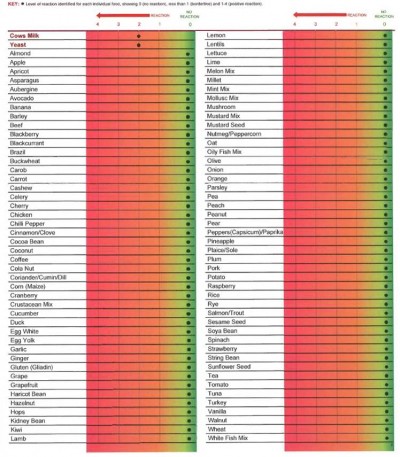 Cow’s milk and Yeast were my “reactive” items.

I have known for a long time that too much dairy sets me over the edge. I laugh when I type this as it makes me think of our summer holidays in 2009. We went to Wyoming and wound up doing a triathlon in Rexburg Idaho. Post-race we stopped for a milkshake and burger in Victor Idaho (through twitter I had heard of an amazing roadside burger place with the best milkshakes – I had to have one). The milkshake *was* incredible. But sadly it made me SO SICK. 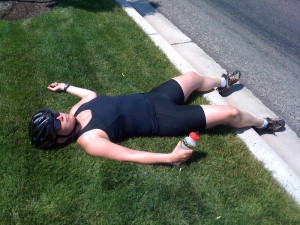 Laid down by cycling on hills, by dairy, or by both?

Lactose intolerance runs in my family – my sister and grandmother both cannot have milk unless they take a lactose pill.  I’m less impacted. A bit of cheese and a bit of dairy is ok, but an indulgence sends me straight to the loo.

Yeast was a bit surprising. But only a bit. We cut out gluten thinking it may have been one of the triggers for DH’s bad stomach, but I knew that wheat was not really my issue.  I could have pasta and flatbread without consequence, and only got a grumbling stomach when I ate sandwiches.  Turns out the grumbling may have been due to yeast, not due to wheat.

DH’s testing was a bit more surprising. Yeast, but no intolerance to gluten, wheat or dairy which were what he thought would be the cause of his stomach issues. Instead, eggs – both whites and yolks – were flagged. And peanuts and cashews (again, not too surprising as a minor nut allergy runs in his family). And mustard. He is in denial about the mustard result.  In his follow up with Vicki an overconsumption of sugar was also flagged as an issue for him.  It took a professional to tell him that 8 sugar packets in his morning coffee could signify an addiction, and could be causing an overgrowth of bad gut flora. Go figure?!

So what next?  Well, I am all for experimenting, to see if eliminating foods will help to resolve lingering problems. For me, I have found a nice balance in my eating, so I really wasn’t looking for another detox (except for the Dry January challenge I am doing with a colleague at work, that is).  But the results have me intrigued.  If I would eliminate dairy, for just 4 weeks, would I feel “better”?  Would the bloat that I carry disappear?

So, another experiment.  Four weeks of no dairy and no yeast. 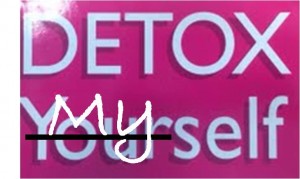 Bring on the coconut oil in my coffee.  Time to detox myself.

2 responses to “Detox Yourself?”