Each year LOTS of people I know decide to give up alcohol for January.  I’ve even done it once myself, in 2004 when I decided to kickstart training for the Moonwalk walking marathon. That year I did a January Detox (no red meat, no nightshades, no alcohol, lots of “none of this or that” in that plan…)  I lasted for about 21 days…

I’ve said it before on this site, but I do enjoy the odd glass of wine (or two). Nice wine is also a feature of my workplace culture. What can I say? I work for a French company.

Just before Christmas I got to talking with a colleague. We both agreed that our November and December had been pretty hectic – with lots of work dinners and social events, and probably a bit overindulgent when it came to wine. So we decided we would do a “Dry January” of sorts. From Monday the 6th (the day we were both back into the office) we would cut out alcohol until our work seminar in February.

Dry January: Is it malarkey?

There are different views on cutting out alcohol.

One is that, in moderation, alcohol is not necessarily bad. A glass of red wine has resveratrol, which is as anti-inflammatory and in general good for the body IF CONSUMED IN MODERATION (like one glass a day).  But the tough part of this is moderation.  Too often one glass can lead to two, and then next thing you know a bottle between two people is easy to consume in an evening, but completely violates the definition of moderation (and that much alcohol is clearly not good for the body).

The other view is that giving the system a break is a good thing.  A recent article in the New Scientist detailed what happened to its staff members when they gave up alcohol for a month.  Most significant was the reduction in liver fat in the abstainers. Liver fat is a precursor to disease, so a fall in overall levels is a very good thing.  Blood glucose levels also fell, showing that the body was overall more efficient in processing food.

So I’m giving it a go.  I figure the worst that can happen is that my family buys a fantastic bottle of wine at a meal and I have to say no to a glass. Surely the important thing in this scenario is being with family, not the glass of wine that comes with our meals. I can think of worse things.

Besides, right now the last thing I want is to have anything holding me back from good sleep and feeling fresh.

I am hugely sleep deprived at the moment.  We picked up our puppy on Sunday, and are still getting used to his patterns.  Right now 2am wake ups and walkies are a part of my life. I’ve been told this is what early parenthood is like, minus the maternity leave.  Anyway, no wine gives me the best chance possible to get some good sleep and to feel as refreshed as I can when I am listening to a dog whimper in the night as he gets used to his new home. 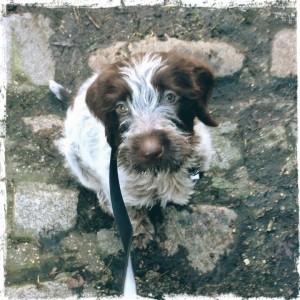 Any excuse for a gratuitous puppy photo, right?!

One response to “Dry January?”