On Saturday March 30th I did the Egg Hunt Triathlon, in Pembroke Pines Florida.  I did it, despite the huge sigh my sports doctor let out when I told him that I was going to race at the end of March.  You see, I hadn’t run 5k since January 1st, when my new year’s run around the park triggered my knee to blow up.  I had just started to rebuild and rehab in early March.  All this after being told in January that I really needed to quit running and by definition, that meant quitting triathlon.

I decided that The Egg Hunt would be my little test.  A test to see if I could even hope to have a 2013 triathlon season.  If it all went horribly wrong and my knee blew up again, well, I would know that the orthopaedic doctor was right – that it was time to stop running.  But if my knee didn’t blow up, if it made it around 5k?  Well, it would be a little shred of hope that I could cautiously move forward with training for this year.  That I could buy myself a little more time before hanging up my running shoes for good… 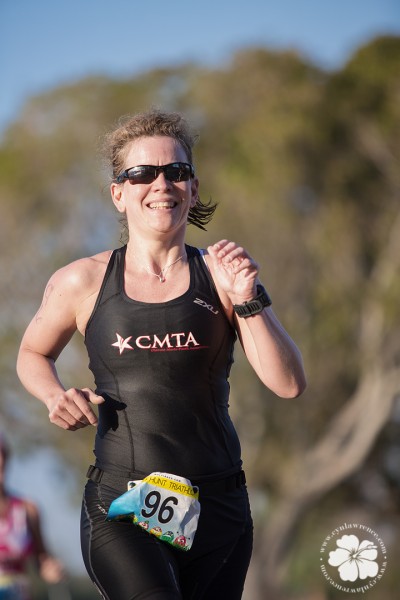 Photo by Cyn Lawrence Photography (my little sister is an awesome photographer!)

My knee did not blow up.  It was a bit sore.  I had to walk some.  Ok, a lot.  Probably about 8 minutes of walking in a 5k.  But I was okay with walking as much as I needed to if it meant that I could race.

Walking aside, I still managed to shave about two and a half minutes off my 2012 Egg Hunt time.  My swim felt great, my bike feels like it is (finally) getting stronger.  And I feel like I may be able to get a few more running events out of my legs yet.

You know what else?

I had SOOOOO much fun.  I love the adrenaline at the start of a race. I love pushing myself and seeing what I can do.

I love that I actually CAN do a triathlon.

I did not take that for granted on Saturday – not for a second – not one single stroke, pedal or step. Because far too many people I know – including friends with CMT and Ehlers Danlos hypermobility – way too many people can only dream of doing this.  And for a good month this year, I thought my days of DOING were over too…

And you know what else?

It sure as hell beat staying at home and sitting on the sofa on Saturday morning.

If running has to end for me, there is no way I am going back to the sofa.  Because a life full of movement – however I can move, in whatever way – this life is not something that I’m going to willingly surrender.  It is worth a hell of a lot more than a remote control…

One response to “My 2013 Egg Hunt Triathlon”