Last month was the start of the Endurance Foodies blog carnival, the brain child of Jason from Cook Train Eat Race.  The idea was simple – get a bunch of athletes who like to eat together to post on food that an athlete might want to eat.

Yesterday I posted part 1 of my contribution to the series, Tunisian-inspired seafood stew with quinoa.  But there is just too much goodness in North African cooking, so I had to post a second day.  Today I am posting chakchouka – popular across North Africa and the Mediterranean, I prepared a Tunisian style tomato and egg stew, a perfect post workout brunch.  I’m also posting a quick review of the book that was the source of inspiration for my participation this month – Claudia Roden’s “A New Book of Middle Eastern Food”.

The first time I made chakchouka I thought it would be strange – but really, it is delicious.  I had seen shakshuka on brunch menus in London but for some reason never quite could bring myself to have tomato stew with eggs for brunch.  That is until I read Sarah Melamed’s piece on Israel’s favourite breakfast.  The photos looked so lovely that I knew I had to try it at home. It is now a regular weekend breakfast for us, especially if I have tomatoes or peppers to use up.

Chakchouka (shakshuka) is a simple dish found throughout the Mediterranean.  The recipe I used this time was from Claudia Roden, listed as a Tunisian version.  There are 16 pages of egg-based dishes in Roden’s book, and I look forward to trying more as this was very good – I bet the others are too.

I prepared this immediately after a long trainer ride.  It was simple, ready within about 30 minutes.  I served it with a big hunk of gluten free bread, and it was perfectly satisfying. 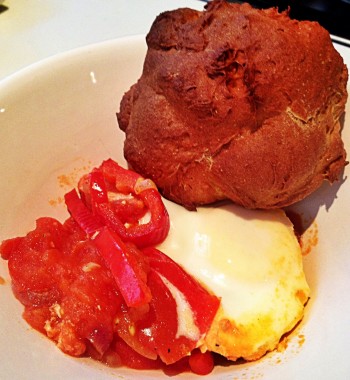 1.  Slice peppers and onions thinly.
2.  Heat olive oil, add peppers and onions along with the salt pepper and paprika, and stew until soft (about 5 minutes)
3.  Halve tomatoes and add to the pan, cooking down until soft and stewed (about 10 to 15 minutes).
4.  Crack eggs into stew – at this point Roden suggest two ways, either covering until eggs are set, or stirring through to create a more “tomato custard” type of stew.  I chose to keep the eggs whole.
5.  Cover for about 5 minutes until eggs set.
6.  Serve in bowls or on a plate.  We ate ours with rolls, and just couldn’t get enough.  It was so good, hearty, perfect for a cool day and after a workout.

Variations: Roden suggest adding sliced zucchini (courgettes) or cubed eggplant (aubergine) to the peppers and onions.  Or perhaps cubed potatoes at the tomato stage to stew down.  Or Merguez (spicy lamb) sausage.  Or a clove of garlic, or perhaps harissa or cayenne for added spice.  I debated adding potatoes but as we were having bread decided against. I opted for smoked paprika (as it was in my cupboard) rather than cayenne.  I always choose harissa as I love the spicy red paste – but decided to try new territory.  I was not disappointed, and I think any of these variations would be delicious.

When Jason chose the Mediterranean for this month’s challenge, I knew it would be a great opportunity to put my Claudia Roden book to the test. 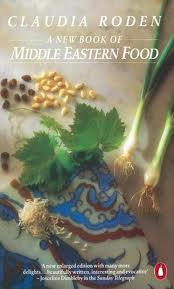 I received this book for Christmas well over a decade ago but sadly have never really used it.  To no fault of the book’s either – I think I am just a creature of habit.  One of my goals this year is to give all of the cookbooks on my shelf a chance to become favourites.

This book (or at least my edition) is unlike most “modern” cookbooks.  Photography is non-existant, and instead Roden relies on simple to follow instructions with excellent writing.  The book is peppered with quotes and stories from the middle east.  There are line drawings serving as illustrations – not only of the food but of the place, of the culture.  It was, more than anything, a fantastic read.  I picked it up on a Saturday afternoon – as DH went to the rugby I had an entire afternoon and evening to myself.  I curled up on the sofa, expecting just to leaf through, and instead found myself immersed in prose.  This book was just so beautiful to read.

Roden explores the region of North Africa, through to the Levant and ancient Persia and Babylon with her writing.  The recipes highlight regional differences, as well as the culture and FLAVOUR of each country.  Although I didn’t know much about Tunisia, my chosen country, before I started flipping through, by the time Saturday afternoon had turned to evening and I had chosen my recipes, I was excited to see how my chosen recipes would turn out.

The instructions were easy to follow, and as I am pretty confident in the kitchen I did not need step by step photos or finished shots of dishes to guide me.  I let my tastebuds do that for me.  The book – and the end results – were a treat.

If you are at all interested in Middle Eastern cooking (including North African couscous and tagines as well as Persian roasts and Turkish and Greek soups and salads) I would definitely buy this book.  I now understand precisely why it is called a classic and a must for at home cooks interested in world cuisine.

For more Endurance Foodies inspiration, search the tag #endurancefoodies on Twitter and Instagram for some shots of what those foods might be (and for a sampling of Jason’s waffle creations too).