Last month was the start of the Endurance Foodies blog carnival, the brain child of Jason from Cook Train Eat Race.  The idea was simple – get a bunch of athletes who like to eat together to post on food that an athlete might want to eat.

Hot on the heels of the New York Times article on the Mediterranean diet which reported the findings published in the New England Journal of Medicine that a Mediterranean diet – that eating lots of olive oil, nuts, beans, fish, fruits and vegetables could be good for your heart – this month’s #endurancefoodies theme is the Mediterranean.  Entirely by coincidence though, as the idea was simply to get us athletes who eat inspired to cook foods from a wide variety of countries.  So many countries on the list to choose from!

I tried to nab Israel (taken) and Morocco (taken) so then asked Jason what was left – we decided that I should do a country that was a bit more obscure.  I chose Tunisia.

Tunisia is the smallest of the North African countries, and I know I lot of people who have been there on vacation.  But… not me.  I hear the beaches are wonderful, the Roman ruins amazing, and of course, it is where all the Star Wars scenes on the planet of Tatooine were filmed. 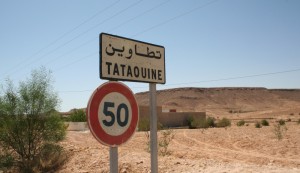 Maybe you remember years ago I made sugar cookies in the shape of Darth Vader and Yoda to fuel a 100km ride? 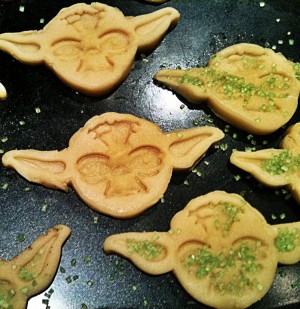 Don’t worry – that isn’t the recipe I am sharing…  I’m somewhat familiar with North African flavours and had an idea about the type of food I would make – I spent a month in Morocco including the Rallye des Gazelles, and have been to Algeria for work before.  There is a lot of inspiration to draw on, particularly when it comes to stews, tagines, couscous, and the incorporation of fruit into savoury meals.

I found it hard to choose only one recipe to share.  So I am doing two posts.  The first, today, is my main contribution to the March Endurance Foodies challenge – a healthy, delicately flavoured and nicely filling seafood stew served with quinoa, great for a weekend meal and especially after a long day of training.  Tomorrow I will post a recipe for chakchouka – popular across North Africa and the Mediterranean, I prepared a Tunisian style tomato and egg stew, a perfect post workout brunch.  Tomorrow I will also post my thoughts on my Claudia Roden cookbook, which the #endurancefoodies challenge also gave me a chance to read and put to work.

The original Claudia Roden recipe was for fish couscous.  However, there were a few adaptations that I made.

First, we are a gluten-free household (I eat gluten but we don’t at home because of DH’s intolerances).  So I made this with quinoa.  Which by the way is a complete win from an #endurancefoodies perspective. One cup of quinoa has 30% of the recommended daily allowance of magnesium.  I take magnesium supplements to help manage cramping, so am always on the hunt for good sources of this mineral.

Next, I had asked one of my favourite local restaurants to save me some fish bones from their daily prep.  However, when I went to pick them up they had already used the bones to make stock – which was my plan!  After discussions with the chef, he gave me a bag of their fish stock, and also an idea.  To add flavour and richness to the stock, he suggested I take shellfish (or just shells of shellfish – but I chose whole shrimp), roast them for 20 minutes in a covered pot with the spices, and then proceed with the recipe.  That’s what I did, and it was a delicious addition.  Plus, I really love shrimp.

Finally, the recipe called for quince.  But quince is an autumn fruit, and we are still coming out of winter here.  So I weighed the choice between a tart apple or a conference pear (the longer pears) – and I chose a pear.  This seemed really strange to DH, but at the end he agreed that the fruit in the stew really made it and balanced the flavours perfectly – so don’t cut this out because it seems strange.  Trust me.  It’s delicious. 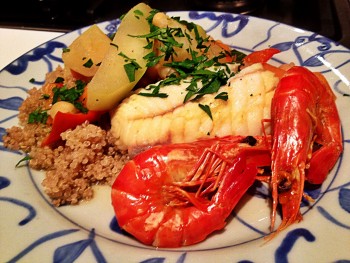 This is a beautiful meal – both to look at and to taste.  It is loaded with goodness.  I did not compile the nutritional breakdown – but it is all whole food, which in my books means good for you.  I am used to tomato-based couscous with spicy harissa, and had never tried to make this more subtle type of dish.  The cayenne gave it a dash of heat, the saffron an almost-floral note.  It was so good.  Make it, you won’t regret it!

1.  Peel the vegetables – and cut the white turnips, carrots and onion into chunks.
2.  Rinse the shrimp and place in a pot that can go from oven to stove without an issue.  I used a copper pot, but a Dutch oven would work too.
3.  Dust cayenne on the shrimp, and sprinkle the saffron on top.
4.  Cover pot and place in a HOT oven (ours was about 200C / 400F) for 20 minutes.
5.  Remove from oven and add liquid (fish stock and water) and vegetables and cook for another 30 minutes. Skim the froth which accumulates in the soup occassionally – you don’t really want this in your stew. If you are using fish bones, remove these from the stew after 30 minutes.
6.  Peel and slice pear into pieces.
7.  Make quinoa as per directions on the pack.  And leave to one side, covered, to retain heat.
8.  Add fish fillets and pears.  Cook for another 20 minutes.
9.  Serve with quinoa, and a sprinkle of parsley for more colour.  We always have parsley in the fridge and often sprinkle on our food – and parsely is another winner from an endurance foodies perspective, as it is extremely high in anti-oxidants and Vitamins A, C and K.

For more Endurance Foodies inspiration, search the tag #endurancefoodies on Twitter and Instagram for some shots of what those foods might be (and for a sampling of Jason’s waffle creations too).