At the end of last season I felt… Directionless.

2012 was not the greatest season of triathlon for me.  I fractured my ribs in a random topple just before the USA Paratriathlon National Championships.  I suffered hypothermia in my last race of the season.  I struggled to manage peroneal tendonitis.  And I lost my paratriathlon classification.

Of all these things that happened in 2012, probably the one that affected me most was the loss of my paratriathlon classification.  Basically, to compete as a paratriathlete at national and international level events, you need to “classify”.  For people like me, without an obvious impairment (like an amputation or paralysis or blindness), we have to be assessed every triathlon season, to see if we are “impaired enough” to compete as paratriathletes.  Unsurprisingly – after putting in two years of hard work to try to improve my performance as an athlete – my demonstrated bench strength meant that I no longer met the minimally impaired threshold – I had gotten too strong…

A blessing – as I was stronger.  And a curse – as I lost a key motivator.

In 2009 when I decided to take triathlon more seriously I looked to paratriathlon as home – a place where I would no longer feel like a “back of the packer” triathlete, a place where my challenges and limitations would be par for the course.  And I found it. I found acceptance and encouragement. I found people committed to the pursuit of personal excellence.  And I felt completely at ease with my own performance abilities. 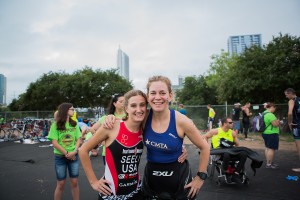 In May, a day before the USA Paratriathlon National Championships, it was like my “home” had vanished.  At the stroke of a classifiers pen, with tests which (in my opinion and those of my neuromuscular disease team) are just insufficient to demonstrate the true ability and challenges an athlete with a neuromuscular disease faces, I was no longer a classified paratriathlete.  Although I am still able to participate as a paratriathlete in “open wave” events – until I experience degeneration, I am unlikely to compete at national level events again.

A sucker punch, so to speak.

I have spent the last nine months coming to terms with this.  The system that the International Triathlon Union has implemented to assess and classify athletes with neuromuscular challenges is just not able to capture the full extent of the challenges I face as an athlete with an invisible disease.  And although that system is under review, I am not optimistic.  The paratriathlon representatives I have met have told me (individually and off the record) that it will likely be impossible to find an objective and quantifiable way to assess the types of impairment like that I face – degraded functional performance, bench based strength that does not correlate with functional ability, fatigue impacted performance over the duration of an event.

So I’ve been struggling.  Feeling directionless.  Without a big goal – like Nationals – to spur me on, what was the PURPOSE?

Purpose (noun)
The reason for which things are done.

In November I started to work with a new coach, redefining my own objectives. To give myself purpose. To get out of the directionless space I felt I was in. I looked inward to find a goal for 2013 – one that I thought was a manageable 2013 ambition – to run a continuous pain free 10km.  It was focused on getting comfortable in the sport I find hardest – running.  It was a personal stretch. We were breaking it into manageable parts.  Progress was noticeable.  Real.  Things were going so well, with a little bit of niggle in December but nonetheless a decent 5km run to start of 2013.

And then boom.  Persistent knee swelling and the feeling that “something was just not right” caused me to face my deep seeded fears and I made an appointment with the knee doctor.  After two consultations last Friday I saw a sports doctor and got my marching orders – if I want to have any chance at all of returning to the same level of performance and activity that I have built up to since 2009, I have to stop all loading on my knee to break the cycle of inflammation. To get a situation that was spiralling out of control back into a safe zone.

And – just like that – my 2013 “reasonable goals” seemed to have vanished.  Once again, I felt directionless…

I got the doctor’s orders last Friday, and flew away to a week long training camp in Lanzarote on Saturday, the very next day…

Lanzarote: where triathletes come to train, to build fitness in the pursuit of dreams…

I had booked myself onto my coach’s camp to ride long and climb hills.  To hone my running. To take me closer to my ever so modest goal for 2013 – a pain free Olympic distance triathlon. None of which I can do at the moment.

I have gone out on two short rides this week, totalling three hours on the roads with no substantial climbs.  I’ve spent four hours on the turbo trainers by the pool.  I’ve swum nearly 15 kilometers in four days.

I’ve had to bow out of things, saying “I can’t, I’m injured” – it is such a strange thing for me to say, as in my head I have been injured since day one when I set my sights on completing a triathlon.

Although it seems odd, this week of foregone and reshuffled training has helped me to find DIRECTION again.

Direction (noun)
General aim or purpose; the course which must be taken to reach a destination.

And what is my direction?

I just want to heal – as much as I can.  I don’t expect a miracle, but I would like to heal enough so that I can continue to feel strong and healthy and fit.  No matter how hard it is to say no to a ride, to forego a run, particularly when I’m feeling just fine – I’m going to stick to the doctor’s orders.  I’m going to stick to the plan – the way forward – the DIRECTION.

The DIRECTION? To do what ever it takes to keep moving, to keep on moving. To get strong to stay strong.

It took me 30 years to find my way to an active lifestyle.  The multisport lifestyle is beautiful. I’m not giving it up without a fight.  I still have some races in my blood, a lust for the starting gun, and some big dreams I’d like to achieve.  It just may take a while longer and a lot more creativity to figure out how. 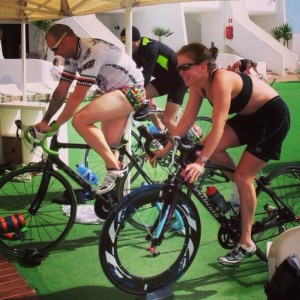