If you have followed my blog or Twitter account (or my recently deactivated Dailymile account) you will know that of all things triathlon, the one aspect of training that (perhaps) I avoid more than running (which I avoid due to injury) is core and strength work.  It is truly ironic, as I have always thought that if I could become stronger, I might be better able to physically handle running, and I thought that I would be able to get faster swimming and biking.  But honestly?  I just do not like the format of going into a gym and lifting weights.

In 2010 in the triathlon offseason I put emphasis on strength work (well, when I wasn’t dead from the nasty chest thing I caught in China which put me out of action for 2 months).  I diligently followed the sets prescribed by my coach.  But I just found it dull.  I gravitated to doing The Regimen at home.  But again, over time and when the novelty wore off it just wasn’t a format that got me out of bed in the morning (although I still think it is the perfect format for me when I am on the road travelling for work).

How to get strong if you just don’t like the gym / lifting weights environment?

In the 2011 offseason I had an offer at a personal training gym near where I live, so for my three sessions I worked on the TRX machine.  I liked the TRX.  A lot.  So much that I invested in one for home.  But forgive me when I say that I don’t use it.  (I know, I know… I keep promising myself to rectify *that* mistake and get it out and do “just a little” work as it would help me SO MUCH… But I digress…)

You see, I started to suspect with strength training what I needed was a CLASS.  To train with OTHER PEOPLE.

So one day I was reading Bangs and a Bun who was talking about bootcamp.

That, I thought, was the answer.  A class with other people.  To get strong.

Now I am a bit skeptical when it comes to me and classes and doing strength work.  I have always been weak and know that I am prone to injury and that form (how these moves are done) is so important to staying healthy fit.  I wondered if a class could be done that could combine high energy, more than 3 people, and an emphasis on form.

But I decided to give it a go.  I started doing SITC Bootcamp in January 2012 – as a part of the base building for my 2012 triathlon season.  I dreaded my first class.  What would it be like, training with a bunch of women I didn’t know?  Would I be the weakling?  Would I be judged?  Would I be able to walk afterwards?  Would it kill me, or make me stronger?

Without a doubt, adding in bootcamp has FINALLY completed the missing link in my training.  I adore the format.  And my fears?  About training with others?  About being the weakling, or being judged?  It just doesn’t happen.  The classes are just way too tough to have any time to pay attention to stuff like that.

I don’t have a photo series from the class, so I pinched this one from Bang’s blog.  In it you can see a flavour for what I now find myself craving twice a week.  Weights.  Lunges.  My nemesis – the base push. 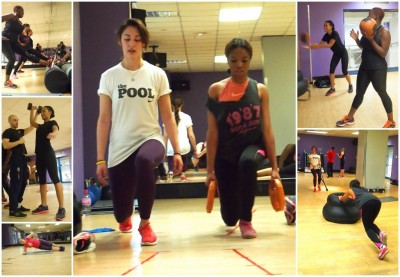 No two classes are ever the same.  Except for the worked hard feeling they leave me with.

The classes regularly kill me (well for a few days anyway).  In a good way.  I did parnter situps on Thursday with the medicine ball, and couldn’t laugh without muscle pain until Monday.  Yep.  3 full days of muscle soreness. Hurts so good.

The flip side is that I have to be careful.  When I have races coming up I won’t go to class – to give my muscles a break from the load.  It has worked well for me so far.  I felt good going into the London triathlon (if only the hypothermia didn’t get me…)

And the instruction?  I have been surprised.  Even with a class of 10 we receive good correction on form from the trainers, Phil and Tim, who alternate the sessions during the week.

I haven’t signed up for the purpose of losing weight or trimming down – but this is also a part of what is offered.  Tim and Phil are on hand to answer questions about food, meals and healthy eating.  They have their philosophy—but they aren’t off putting with their views.  In fact, their views make sense and tend to be supported by science and evidence.  I just choose not to follow their system ALL THE TIME… (I am there about 80% of the way – it is really just healthy clean eating common sense, but I have a love of baking that I don’t want to give up totally…) But I digress.

The point is—when you hate to do something, but know you need to do it, invest the time and energy to figure out and find the format that will work for you.

For me that meant finding a high energy class format for strength work.  For the first time probably ever, I am feeling strong in my legs.  Stable.  Healthy.  Grounded.

And I actually look forward to strength training now.  Yes, I *did* just write that.

I think over the course of 2012 adding in bootcamp has made a world of difference to my overall strength.  It has been my missing link.

Thanks Phil and Tim.  I look forward to getting stronger with you in 2013!  And thanks to Bangs too for the great tip.

Disclosure:  I received no compensation for this review.  I received no discounts for the classes.  I am simply putting my experiences out there for you.  If you want more details on the London SITC Bootcamps, check out their website.

PS: Operation October? All the good R words?  A big shout out and RECOGNITION to SITC for helping me to get strong in 2012!

One response to “Getting Strong, Discovering SITC Bootcamp”