A few posts ago I touched on my “Operation October” – a month where I would focus on doing all the good “R” words, things like revitalising, refreshing, recommitting.  And also rehab.

As pretty much everyone knows, I have had some serious issues with my feet – and in particular my right foot.  For about 2 years now, since my first olympic distance triathlon, I have been nursing tendonitis.  There have been good moments, when the pain and swelling have eased.  And there have been bad moments.  The type of bad moments when the only answer seems to be to stop running, although what you really want to do is just cut off the offending body part and tendon – seriously, the pain can be too much to bear at times! 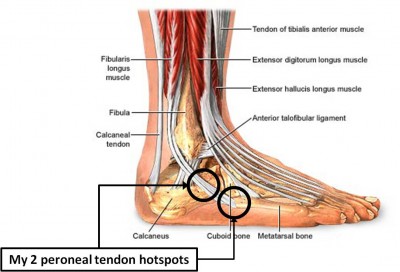 I have two hotspots – one where the peroneal tendon curves under the ankle bone, and another where it attaches to the metatarsal

I did not want to stop running, as in all honesty even though it hurts, of all the triathlon sports even though it is my weakest it is running that has made me feel physically the strongest.  So at the start of 2012 I resolved that I would do whatever it would take to get the situation under control.

I see some of the best people there are when it comes to my nerve disease.  I have taken lots of medical advice, and know there are two ways to deal with tendonitis – either complete rest to let the tendons recover, or working through it seeking to build strength in order to have the muscles take the tension off the offending tendon.  I believe – based on my own experiences – that when I take time off without activity I have an overall deterioration in strength due to my nerve disease.  So, I opted for the “train through it” approach, coupled with some serious TLC.  I see some some excellent therapists (both acupuncture and sports massage specialists).  I started to train on the anti-gravity treadmill, to reduce the load my tendon was experiencing while running.  And I added in strength training in a format that I love – bootcamp – to help me to get stronger in the hopes of FINALLY alleviating my tendonitis.  I even revisited the gait lab to see if there was anything that had changed in my weight distribution and loading while running, to see if anything new was contributing to this tendonitis.

But nothing was working.

Deciding to leave no stone unturned I finally made an appointment in July with Mick Habgood, a sports podiatrist who practices out of Balance Physiotherapy in Clapham.  My neurophysiotherapist Gita had recommended Mick.  He works with athletes, but has trained with one of the foremost CMT experts in the world.  I wrote about how I was hopeful that I would find a solution.  But these things just take time.  Time to meet with Mick.  To try out taping.  To decide a course of action.  To cast orthotics.  To pick up said orthotics.  To go away on holidays and receive a call telling me not to run in the orthotics under any circumstances until I had been observed in them by Mick.  And then, finally, having a follow up appointment in September to get the go ahead to use the new solution.  To see if I had finally found something to help take the pressure off my tendonitis.

To date, everyone (medically) has been treating me like a typical person with my nerve disease.  Meaning I have a weak peroneal muscle so that must be the cause of my tendonitis.  So my orthotics – up until early 2012 – had corrected me by pushing me toward my big toe – off the lateral edge of my foot.

But in layman’s terms this was entirely opposite of what was actually happening to me biomechanically.  Instead of supinating (rolling on the lateral edge of my foot) as would be expected from people with my nerve disease, I was pronating, or rolling over onto my big toe area.  This movement is probably down to my hypermobile joints.  And is definitely unusual for anyone with my nerve disease.  So a solution that forced me to roll even further onto my inside edge of my foot was making my peroneal tendonitis worse.  Mick saw this and said he was going to try something unusual – correcting me for sport, not for my nerve disease.  And crafting an orthotic solution that would actually cause my foot to want to land on the lateral edge – the side that is weak from my CMT.

It is risky.  But in his assessment Mick thinks that my muscle strength will be good enough to respond to the new alignment, that my ankle will not roll outward or collapse with the correction.  But it is a go slowly process.  To avoid injury.

Knowing it is best not to change and use new things on race day I lined up for the London Triathlon in my old shoes and orthotics.  With my post race recovery period I didn’t start running again until October 1st.  But on October 1st I resolved to get back into running, in a slow, steady and deliberate manner. 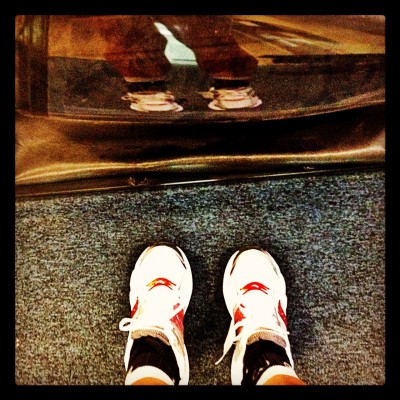 I’ve been doing only a mile each time I run.  But I have been trying to run as much as possible.  Last week I ran 5 out of 7 days.  I am hoping that I can keep up with that level for the rest of the month.  The idea being that with consistent regular running – even at a low distance level – that I will give my foot some time to adjust to the new set up.  To settle into things before adding any additional stress into the equation.

So far so good.  My foot did pretty well with 5 days running.  I definitely feel out of run shape, but having a mile to do is achievable and will keep me at some level of run fitness for the next month.  And running a mile makes me happy, as I still remember so clearly the first mile I did after 25 years of not running.  Each mile is an affirmation of just how far I have come when it comes to getting strong, and pushing my limits beyond that which I ever dreamed possible.

So, here’s to a mile a day for as many days as I can.  Here’s to Operation October.  And here’s to rehab, a slow recovery and hopefully a final solution to my persistent, pesky peroneal tendonitis.