At long last my laptop is fixed.  I guess sometime in August, Windows or McAfee updated, and along with that my internet connections were wiped out.  So wiped out that both Windows and Sony were baffled.  So my favourite computer guy to help me out of a bind, and I FINALLY have a laptop again.

It’s been a long time without blogging.  I have been dying to get some things up – like my Rev3 race report.  And some final thoughts about the Olympics.  And some CMT Awareness month posts.  But without a PC (or time – my god it has been so busy since I’ve been back in town!) it has been tough.  I am so happy to be back!  First up though, my Rev3 race report.  Appropriate as I am about to do my last race of the season, so I had better blog this one before Sunday!

WAY back in August I did a Rev3 race, while we were on holiday in Maine.  It was DH’s “A race” and my first time doing an aquabike.  An aquabike?  Yes!  An aquabike – a swim and bike, without the run.  A great way for me to up my distance in a race environment, and to avoid doing what has been giving me a lot of trouble (the run).  I was excited – and NERVOUS – about my first foray into middle distance racing.  Not that the swim distance scared me.  Or the bike distance.  I have done both distances many times over.  But never in a race format. 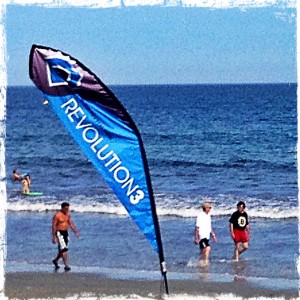 What can I say?  The venue was gorgeous.  The roads were nice to ride on (well, for the most part – except for one nasty swift 90 degree right turn, and another single lane bridge turns into nice hill climb).  The staff were super friendly.  The atmosphere was great. 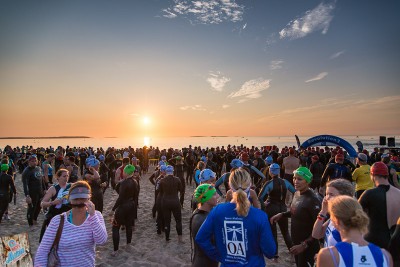 I mean.  You can’t really fault a swim start with a sunrise like this, over the Atlantic.  I was really lucky as I met my friend Chris at the swim start, gave him a hug, and ambled into the warm waters for a morning swim IN THIS.  Breathtaking.  And so much fun.  Not a stressful race at all.

I definitely enjoyed the Rev3 experience.  And I particularly enjoyed meeting people I have followed on Twitter or whose blogs I have read. 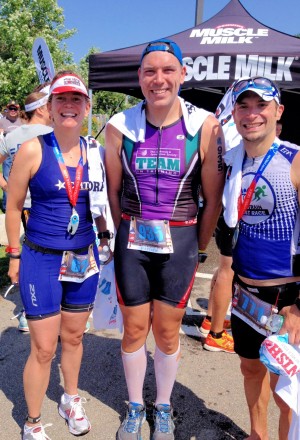 I met Matt and Jason at the finish line.

And that’s not all…  I saw Jamie and Sam the day before at the athlete briefing.  I met Katie, chatted with Christine, ran into Robert… I watched Jen cross the finish line.  I know Danielle and Cindy were volunteering (but I didn’t see them!)…  And the list goes on.  It was truly spectacular to be at a race with so many “friends” – I felt like I knew people there, making me feel really at home.  I loved it.  I made me happy to be a triathlete, to be around such positivity.  And such speed.  Damn some of the people I know are FAST.  Wow.

I also enjoyed the post race food.  Lobster bake.  Not one but two lobsters per person. 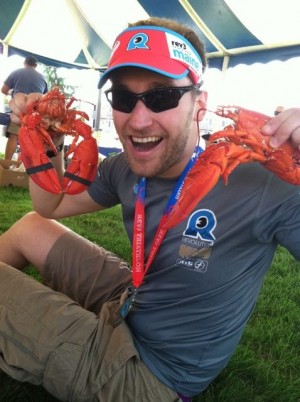 This is Jamie with his lobsters.  Thanks for letting me borrow your photo!

A quick comment on the post race food.  It was AWESOME if you went for the lobster bake option.  But it was APPALLING if you were a vegetarian.  There was just nothing for “no meat athletes” at the finish.  Ham and cheese sandwiches.  Um, not good enough.  So I think Rev3 need to up their game here.

I went into this race for the experience.  I had a few hopes.  First, to finish the swim in 38 minutes.  Next, to finish the bike in under 4 hours.  Third, to race hard – to really push it on the bike, knowing that I did not have to run after.  And finally, to have fun and smile the whole time.

I exited the water at 41 minutes.  I made a fatal strategy error on the swim, not choosing where to swim before the start – would I be just next to the buoys, or east, or west of them?  So I kind of messed up.  I swam all over the course and was slower than expected.  And frustrated.  I tried not to let it get to me.  But I was disappointed in myself.  Not having a strategy on where vis-a-vis the buoys I would be swimming is a freshman error.  And not one that I will repeat.  Lesson learned – with a time 3 minutes slower than expected.

I knew that if I had been well trained a 3 hour 30 minute bike was well within my grasp.  However, I had not been training enough for that.  With the Olympics my training volume had diminished – a lot.  So my secondary goal was to go sub four hours.  Which I did.  Just.  With 3 hours 59 minutes.  I realise this is not a fast time AT ALL for a 90km bike ride.  But I am okay with it.  It represents the fitness and strength I had on the day.  And it also includes a pretty nasty learning experience.

You see, somewhere around mile 15 or 20 of the bike I decided I wanted to take a nap.  A nap WHILE RIDING THE BIKE.  This is NOT NORMAL.  So as soon as I started zoning out, I slapped my face and started thinking – what could this be??  I remembered reading a blog by Sarah Piampiano, about how she had a bad race and felt super sleepy, and that her team had thought it was electrolyte imbalances.  Could that be it?  By this time I was feeling rough.  Like really really rough.  So I started fishing in my bento box on my bike.  Searching for my endurolytes.  I had expected to take these, probably by about mile 30 or so… I sweat a lot in physical activity and learned in the MS150 that Endurolytes help me to stay alive.  But needing them early, at mile 15… That surprised me.

And somewhere around mile 10 my stomach started to feel odd too.  Like I needed to belch.  Grumbly.  Not normal for me.  I thought it could have been the ocean water start.  So I ate gels, earlier and not timed as planned.  And hoped things would calm down. I time my gels and am consistent with this in training.  I know every 35 minutes I take a gel.  But I needed more than usual to feel decent again, and my stomach did eventually calm down, but it was all so odd. 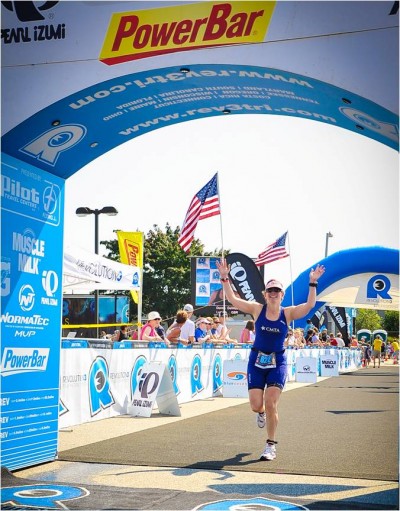 When All Was Said And Done

Here’s what I think about the the strange feelings I had on the bike – the tiredness and stomach issues…  I think they can be explained by two things.

First, it was much hotter racing conditions than I have trained in.  And the swim was much longer than I raced in my wetsuit (although I did do the Bay swim which is 7km – that was in a sleeveless wetsuit).  So I reckon I sweat much more than normal, causing electrolyte issues.  And I probably had some ocean water too, making my stomach churn.

Next, in the week before the race, as we were not at home, we did not eat nearly as much starchy carbohydrate as we normally do.  We eat gluten free at home and so have a lot of rice and potatoes.  But eating out in the US many meals were served without starch – unless you ordered pasta.  I think my eating pre-race meant that I was depleted.  Causing me to have to take on gels much earlier and with more frequency than I had planned.

As for the middle distance – I really really enjoyed it!  When I finished, I decided that I want to race a 70.3.  Yes, endurance sport is COMPLETELY ADDICTING.

To do this I know that I need to do some work.  I need to get to the point that my foot is stable, so that I can be on my feet in a race for 13.1 miles.  Be it run/walk or walk or run – right now my foot is not ready for that.  So my determination to find a solution to fix my woes is stronger than ever.

I have my run coach who is helping me to get strong.  And I have found a sports podiatrist who is doing some different things (not normally done for CMT patients) to help alleviate my peroneal tendon pain.  So I think I may be on track to lay the foundation to rebuild my running, to be able to chart a path to succeed in my new long term goal.

I know that I was amongst the slowest on the course.  But speed has never and will never be the point for me.  The point is that triathlon is fun.  And it is keeping me healthy and mobile.

In the pre-race briefing Conrad Stoltz told all participants to embrace the fun and to not worry about speed – to thoroughly enjoy what they are out there doing. And that I did (once the weird feelings passed, and I stretched off the bike at mile 30 and regrouped myself).  I loved the swim – frustration and all – and I loved the bike – miles 0 to 15, and miles 35 to 56.

I think I am FINALLY learning how to adjust my mindset to make sure that I love doing triathlon – no matter what happens.  That road has been long – learning not to let my feelings be determined by my speed has not been easy.  Just because I am last doesn’t mean that I have to feel low – I am finally having fun, laughing and smiling as the lanterne rouge.  I am finally getting there.  And I love it.

And… I have to thank DH.  Tri-ing with your other half definitely means double the fun – double the ups, double the downs, double the celebrations, double the story telling…  If you think my race report had lessons learned, you should hear his!  He is one of the ones who convinced me to do my first triathlon in 2007.  And he is definitely the one who picks me up and when I am feeling tired and beaten by the multisport lifestyle.  It is so much fun doing this as a part of our team of two.  I can’t wait to figure out what our 2013 season is going to be… 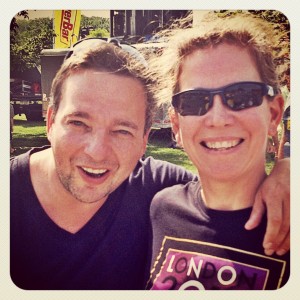 Hamming it up while racking our bikes

5 responses to “An Aquabike? An Aquabike! Rev3 Old Orchard Beach”