I know, I know.  Will this series ever end?  I always said that I had a few more blog posts to do AFTER the closing ceremonies, things that I didn’t get a chance to write about because I was just so busy living the games.  This is the penultimate post on my Olympics experience.  I have one more to share (tomorrow), and then my focus will be shifting a little.  I’ll be heading on vacation for a bit, and then when I get back to London the Paralympics will be on.  I for one cannot wait for this part of London 2012….

A lot of people ask why there is a pause between the Paralympics and the Olympics.  For a start, the two are run by different international organisations.  The International Olympic Committee looks after the Olympics, and the International Paralympic Committee looks after the paralympics.  For the first time the London 2012 organisation integrated the staging of both games.  So everything behind the scenes remains intact.  But there needs to be a transition time, to change over from Olympics to Paralympics.  And that is what is going on at the moment.

One of the things that changes is The Olympic Village.  Not a wholesale change – but it is retrofitted to become completely accessible for the athletes.

We were lucky enough to get a tour of the Olympic Village last week Thursday, including a tour of the athlete apartments and facilities.  So, in post 13 of my series, I will share to you some of what I saw and learned, and the small things that impressed me about the site.

One of the first things you notice when you enter the Village is the sculpture.  It is everywhere.  From poems on the walls, to bronze statues of endangered species on the fields, there is art everywhere. 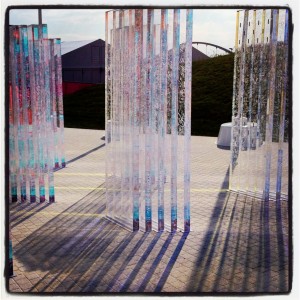 This glass sculpture was generally as far as the media got to in the Village.  All access was limited beyond this point to those who were accompanied by an athlete or a delegation liaison.  I understand that a lot of reporting was done from here by NBC.  Over the course of the games these glass panels were filled with athlete signatures and graffiti.  It was a very cool plaza, which captured the light beautifully.

As we wandered through the village our guide explained to us how each of the building was designed, and what purpose it would have after the games.

The athlete gym (full of Technogym equipment with a treadmill room the size of half a football pitch or at least it seemed that huge!) was going to become the town theatre.  The anti-doping lab was set to become the town medical centre.  The village information hall would become the school – serving ages 6 to 18.  There were playing fields and tennis courts behind the school buildings.  And playgrounds.  And parks.  Lots of open space, thoughtfully landscaped, and ready for use. 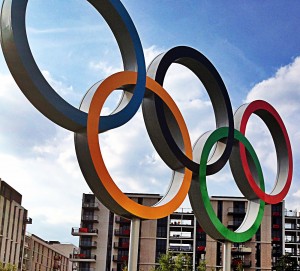 A view of the rings in the center of the athlete village, which I assume will stay in place as a part of the legacy from the games.

The facilities were each designed with thought to what would come next – to LEGACY, that word thrown about to describe the focus of the London 2012 Games.

Legacy (noun): Something left or handed down by a predecessor

Everything was built with an eye to what comes next.

Not all of the structures were permanent.  Take for example the meeting rooms for the Chef de Mission representatives.  Each country has a Chef – a person responsible for interfacing between the games organisers and the athletes – the person who looks after the athlete delegation.  Every other morning the chefs had a meeting – in this temporary structure.  Although the structure was temporary, it included facilities for simultaneous translation, videos, audio – you name it.  But there was a plan in place for the reuse or recycling of everything in it… 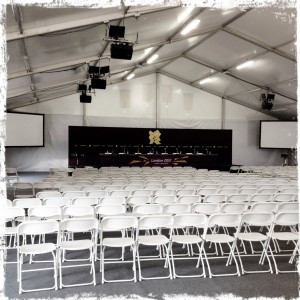 The athlete housing would be transformed to a mix of social, affordable, and luxury accommodation.

This is a view of the Team GB apartments. The block had an amazing view over the stadium.  Each block of apartments was designed by a different architect, giving the area a slightly different look and feel, not just one continuous line of concrete buildings.  I suspect Team GB’s location will be turned into high end accommodation.

The athlete rooms (which we saw but again I did not want to invade the privacy of the team we visited so I didn’t take photos) were configured in a very basic but nice student accommodation format.  But we could see just how the rooms would be transformed after the games.  There were extractor fans built in, waiting for kitchens to be installed.  Satellite points in the areas designated as living rooms.  There was an eye to exactly what would come next…  A lot of forethought and planning.

Just outside of the Team GB block there was a huge plaza covered in picnic benches and with food stalls.  Perfect for enjoying an evening.

Dotted around the village were vending machines and food carts – all available for athletes only.  Each athlete was issued with a card with a bar code, which enabled access to any food or drink they wanted. From any village shop.  At any time.

And when I say anytime, I mean anytime.  The canteen, designed to seat and serve 10,000 athletes, was open for them 24 hours a day, 7 days a week.  It was possibly the largest food hall I have ever seen, and the variety endless.  Afro-Carribean, Pan-Asian, Best of Britain, Salad and Pasta Bars, and a McDonalds.  All free.  Whatever the athletes wanted.

At the entrance to the canteen there was a computer kiosk.  Each athlete was able to log their food consumed to track their nutrition during their stay in the village (think MyFitnessPal but for Olympians and completely based on the menus and portions served at that canteen and village sites).  I thought this was really cool.  According to our guide the McDonalds was the most popular of all the sections of the canteen, closely followed by the salad and fruit, and the Pan-Asian.  Apparently the London 2012 food was praised by athletes who had been to multiple games as being the best they had—I guess because London is so diverse the catering was able to cook for the tastes of pretty much any country.

The athletes also had a “relaxation” centre.  Inside were Wii consoles, table football, pool tables, a bar (no alcohol served) and nightly entertainment and live acts playing.  I felt a bit awkward taking a photo – there were athletes everywhere and I did not want to invade their privacy – but I did sneak this shot… 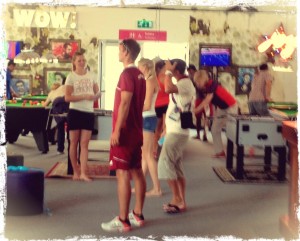 Apparently the Wii gets really competitive in there…

Things that I remember from the visit, that stayed with me?

Well, there are buses circulating in the village all the time.  The athletes are encouraged NOT TO WALK ANYWHERE.  They need to stay off their feet and focus on their events, not getting from point A to point B.

There was very little visible security.  I am absolutely convinced there was security everywhere – but it was not intrusive or noticeable.  The sole exception being that of the Israeli team, which is not surprising given the history of the games in Munich.

I was impressed with the levels of service the athletes experience.  Not just access to food – but the food logging facilities.  Also laundry.  Each athlete was given a mesh laundry bag to check in with their washing, which would be returned to them 12 hours later.  Very cool.

The funniest thing I saw was the Swiss marathon swimmer Swann Oberson mocking one of the race walkers who was practicing on the roads of the village.  The race walker was tiny, and well, walking like a race walker (super speedy with that race walk waddle) and Swann was like a giant in comparison – about 6 foot tall and towering above the walker.  She joined in walking alongside for a bit.  I had to laugh – DH thought she was making fun of the walker.  Maybe so.  Apparently the swimmers were the cool kids in the village.  Some things never change huh?!

The swimmer was not the only person aping around.  I also managed to get my photo taken with this guy… 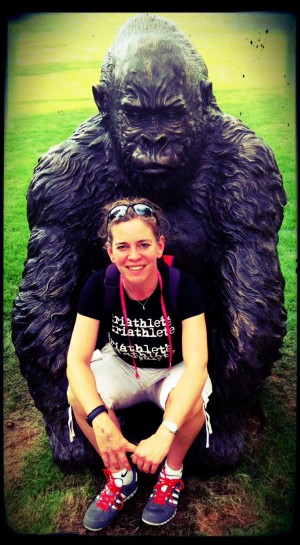 One response to “London 2012 Olympics: Living The Games #13 – The Olympic Village”