Yesterday marked my last shift as a Gamesmaker – a volunteer at the London 2012 Olympics.  I spent the day at Hyde Park working the men’s triathlon race – alongside nearly 500 other volunteers on the sports side of the organisation, and nearly 2000 people (the vast majority volunteers) working at Hyde Park.

At the start of the day, John Lunt (the Triathlon Manager at the London 2012 Olympics) said to us all:

“Have a great day and you’re making history today!”

With that I set off to my part of the race course – alongside the south side of the Serpentine, on the run course, on the path in between the lake and the barriers.

Basically, our job as Gamesmakers on this side of the course was fairly straightforward – keep the course clear for the athletes, make sure no one jumps over the barrier, and don’t let anyone into the lake.  You may think that would be fairly easy – but we did have some action!

During the women’s race Chris (who was just down the course from me) wound up apprehending a stray dog JUST IN TIME!

I didn’t have anything nearly as dramatic – I apprehended a blow up kangaroo who hopped out of its owners arms, before the race had started… 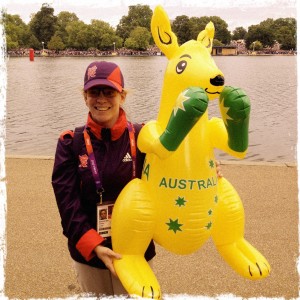 No kangaroos on the course!

It was truly a great day for triathlon yesterday, and I felt hugely honoured to be a part of it all.

People started arriving to spectate just before 7 in the morning – over four hours before the start of the race!  One of the other things we do as Gamesmakers (besides apprehending animals real and blown up) is to chat with the crowds.  I met ironman triathletes, a woman who has volunteered or been to all of the Olympics since 1972, three babies getting an early taste of sport, and countless other fans from all around the world – from Switzerland, Brazil, Japan, Mauritius, France, Australia and of course, from Great Britain.

With huge crowds – I bet close to 500,000 people lined the free to view parts of the course – the excitement was palpable. Of course the highlight of the day was seeing who would win the gold medal – absolutely every athlete received huge cheers from the crowd.

I spent the latter stage of the race just alongside the Serpentine – no wandering around was possible.  I was so close the action.  As gamesmakers were not allowed to take photos, I handed my phone to a member of the crowd who captured some amazing photos – including this one… 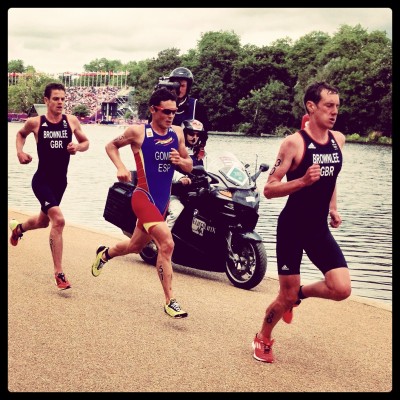 (this has been run through three applications on the iPhone to transform the image – Perfectly Clear, Crop Suey, and Instagram)

I am just off camera in this shot – and would be between the motorbike and the Serpentine lake as they came past.  Yes – hardly enough room to stand.  At one stage it was arms behind the back, heads turned sideways, and a backwards lean – we were THAT close!

It was incredible to see the Brownlees and Gomez race – they were redlining THE ENTIRE TIME.  I mean, Alistair Brownlee walked and jogged the last 200m of the course and finished only 1 minute 30 seconds slower than the winner of the track-based 10km run on Saturday, Mo Farah.  And he had swum 1500m and cycled 43km beforehand.  An unbelievably talented athlete…

After the race Jonny Brownlee needed medical attention (fluids via a saline drip – not uncommon for a triathlete after a long or hard race) so the medal ceremony was delayed.  Word got around that as the stands had emptied, all of us volunteers – if we could get to the stands in time – would be allowed in to see the ceremony.  We had 15 minutes to get around the Serpentine, clear security and get a seat – we sprinted! 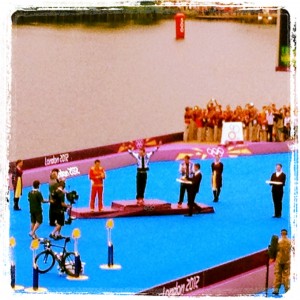 It was incredible to see the athletes get their medals – and to hear the national anthems play.  Although I am a born American, I am a dual national and also have British citizenship.  Everyone in the stands sang along to the national anthem – it was a great moment, full of pride, and I felt so honoured to be a part of it. 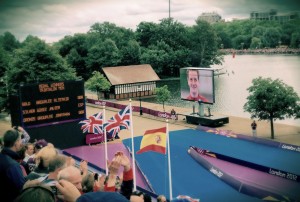 After the ceremony was over all of us volunteers who had completed our last shift headed to the workforce check in zone to pick up a thank you gift (subject of another post!). That was a very nice touch on the part of the organisers.  I finally set out to head home at about 3.30pm – almost 10 hours after arriving at my last shift, my time as a Gamesmaker had ended…

On my walk out I saw a photographer carrying not only his heavy camera equipment but also a bouquet of flowers.  Turns out he was the Spanish photographer following Javier Gomez – winner of the silver medal, the bouquet Javier’s.  I asked to take a photo of the bouquet – and instead he took my camera and handed me the flowers. 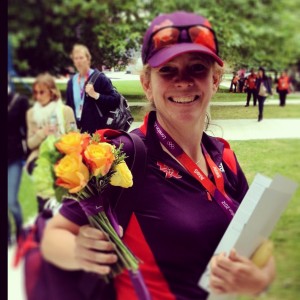 A magical moment to cap off my spectacular experience as a volunteer at the 2012 Olympics.

One response to “London 2012 Olympics: Living the Games Diary #8 – A Golden Day at Triathlon”