All across the UK there are giant viewing screens set up to allow the general public to gather for free to view events.  I was talking with my neighbour who used to be the CEO of one of the host boroughs (local authorities with venues located in their area) and he explained to me that the free screens are part of the Games legacy passed from Vancouver to London.  Apparently in the run up to London 2012 the CEOS of the hosting local authorities met with their Vancouver counterparts, who explained to them that people LOVE to get together and watch the Olympics.  Public screens were a huge part of the Vancouver Games success story – creating a feeling of togetherness and community for all residents and visitors.  So London decided to implement the same experience.

There are screens across London – including Hyde Park, Victoria Park, Waltham Forest, Potters Fields, Woolwich – each free – and at the Olympic Park which requires a ticket.  On Sunday I had the chance to get to the Hyde Park venue.

At the Live sites there are giant screens – but also sports demonstration zones.  During the duration of the triathlon events (from Friday the 4th until Tuesday the 7th) the International Triathlon Union and British Triathlon Federation have teamed up to put on the Triathlon Live demonstration site.  There is a treadmill, watt bike and endless pool on site which the public can access during certain times of the day. 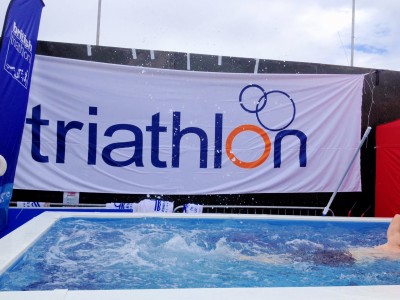 My triathlon coach was given a slot so that a group of us could make use of the facilities on Sunday.

The Triathlon Live organisers set up a contest so that teams with allocated slots were able to compete against other users of the Live site – seeing how far the cyclist and runner could get to in the amount of time that the strongest swimmer could last against the strongest current of the endless pool (about a 1:10 per 100m pace).

The women’s team fielded by my coach smashed the previous top scores and headed the table on mid-day Sunday. 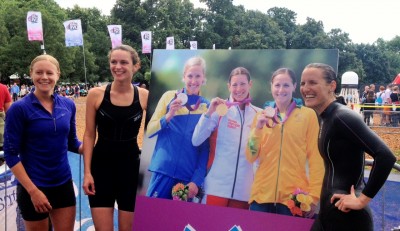 Anna, Liz and Caroline pictured next to the poster of Saturday’s Olympic medalists – Norden, Spirig and Densham

Sadly I didn’t get a chance to try out the equipment.  My own fault really.  I was feeling low on energy from my volunteer shift on Saturday followed by the excitement of Saturday evening’s athletics (I was at the pub enjoying watching the races), so I just didn’t assert myself.  No worries – I still had a great time hanging out with everyone, taking photos for people, and being a part of the buzz.

When our turn at Triathlon Live finished I headed to watch the finish of the women’s marathon on the big screen.  I was hoping Mary Keitany of Kenya (winner of the 2012 London marathon) would win London 2012 – but she faded and just couldn’t hold onto Tiki Gelana of Ethiopia. 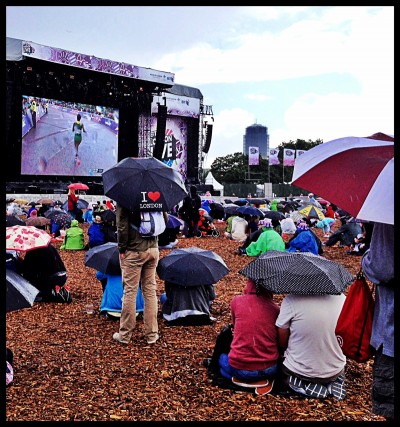 I have huge respect for the Ethiopian runners (there is a great film about the Ethopian running set up called Town of Runners that I highly recommend) so although Keitany lost the race, it was amazing to see Gelana win.  And Gelana is from Bekoji – the town featured in the film – if you haven’t seen it I really really recommend finding a screening or getting the DVD…

Even in the pouring rain the atmosphere at Hyde Park was buzzing.  Later in the afternoon, when the sun came out again, Jessica Ennis addressed the crowds (I had gone home by that time and missed it – boo!).  And lots of groups are performing – for free – during the duration of the Games.  Well worth a visit if you haven’t been – you can check out the schedule here.