Saturday was the women’s triathlon race at the Olympics.  My penultimate shift as a Gamesmaker.

A lot of people have asked me what it means to work an event at the Olympics – what I do, what time I start, who I get to meet…

The women’s triathlon start was at 9am London time.  Our shifts began at 6am.  All of the venues for the London 2012 Olympics have airport style security in place (screening, no liquids more than 100ml – that type of thing) so we had to be at Hyde Park by 5.30am to clear security.  As the venue is in the middle of the park, this means getting to the park perimeter at 5.15am to walk across. Meaning I took a mini-cab from my house at 4.45 in the morning.  Yep, an early start – but not the earliest of the team.  Apparently some of the triathlon team was on site from about 2am setting up the course!

It takes quite a team to put on a big event like this.  Absolutely everyone on the sports side of the triathlon races at the Olympics is associated with triathlon somehow.  Each of us used a triathlon specific screening code when we applied to be volunteers – meaning that we all understand the sport.  There are 284 people on the race course itself, nearly 600 volunteers on the sports side of the event who come with a deep background in triathlon.  And at the Hyde Park venue on race day there are over 2000 volunteers from all aspects of the Olympic games.  It takes a lot of people to make an Olympics race happen!

The big pool of volunteers is split into subgroups, given parts of the course to work on.  I am a part of the run course team on the southern side of the Serpentine Lake. 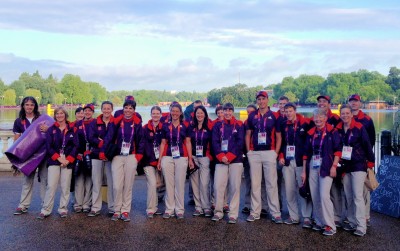 On race day we gathered up our equipment, took our lunches, and were on course by about 6.30am.  The equipment we are responsible for includes signage, crossing point cordons, whistles.

At the Olympics only authorised people can get onto the race course – you will see on the television that everyone has a tag – accreditation.  The athletes, coaches, sports volunteers and certain members of the international and national federations can come onto the courses.

On Saturday morning we were lucky enough to see the Secretary General of the International Triathlon Union, Loreen Barnett, walking around the Serpentine in the morning, taking photos and seeing the full extent of the course the athletes would be running on.  She was happy enough to take photos with our sector as we headed out to our posts – we joked that we were in the presence of the equivalent of triathlon royalty – it was a great way to start off the morning. 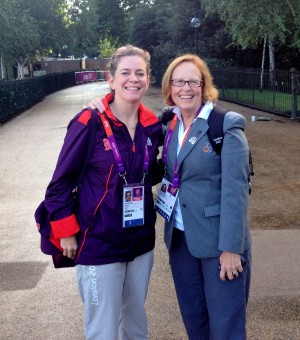 I was so lucky with my position – on the run path between the Serpentine Lake and the spectator barricades, with a good view of both the swim and the run. 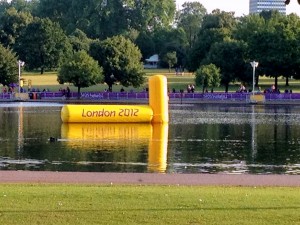 The position was so good that some teams had sent their coaching staff onto this part of the course to report feedback during the swim leg of the triathlon.  I was lucky enough to be able to welcome the Team Japan coaches in the morning.

Can you see that these coaches do not have the same ribbon around their necks as mine – that red and purple band?  That means that they were not issued with accreditation to be on the triathlon course itself – so they were behind the barriers, in the crowd, radio-ing their feedback to the head coach of Team Japan.  There are tight access controls in place!

We aren’t allowed, as Gamesmaker volunteers, to take photos during the races.  I know that on television you can see lots of volunteers with their phones out, taking pictures.  But we were specifically requested on Saturday morning to leave our phone in our bags, as the course would be highly photographed and it just didn’t look professional to be checking our phones or taking pictures.  Fair enough!

Here is a view of where I was on the course. 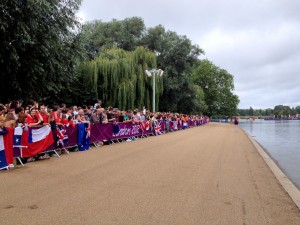 Both the swimmers and runners approach from this direction.

I handed my phone to a spectator and asked her to take some photos of the event.  She got a hilarious video of me “Gamesmaking” during the swim!  I will throw it onto another post once I get a chance to upload it.  Let’s just say one of our jobs is to rally the crowd – I really do try my best to get everyone cheering for each of the athletes.  From first to last, each one of the athletes in the Olympics has done what so few can do – qualify to be a part of the greatest sports festival on the planet.

From early check ins, to setting up the course, meeting and greeting officials from the governing bodies and teams, to crowd pleasing… That is what I do when working the events.  It is hard work, little sleep – but so worth it…

2 responses to “London 2012 Olympics: Living The Games Diary #6 – On the Triathlon Course”