For me that meant attending the PUMA event on Brick Lane in London. 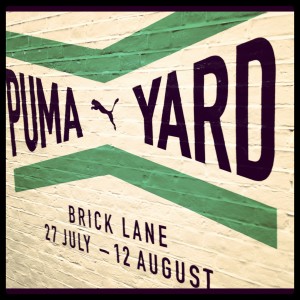 Some of you may know that I am fairly active in my local community in London, Spitalfields.  I volunteer for the Spitalfields Society, a group which works to represent the interests of the community.  Amongst the things we do is to keep our eyes peeled for planning applications – living in Spitalfields is fantastic, but there are huge problems with anti-social behaviour mostly due to inadequate controls around the late night (bar and nightclub) economy.  Being ever vigilant, we spotted in March that an application was launched for a license for entertainment and alcohol on Brick Lane during the period of the Olympics, to enable the construction of a viewing venue and brand experience zone for PUMA.

It is super easy to just turn around and say “NO WAY!  I don’t want more crowds on my street and people pissing on my door step!” (Yes, that is what happens in my side of London)  But I have always found that a “Yes but” attitude works way better than a “No over my dead body” approach when it comes to finding ways to work with people.  Being a huge fan of the Olympics, and also mindful of all the sleepless nights and disturbance that my neighbours face due to our late night economy, I reached out to the event company to establish a forum where they could explain their plans, hear resident concerns, and address these in their application for the license to hold the event.

Fast forward and PUMA got their license (eventually!) and as a gesture to local residents and the Spitalfields Society for helping to facilitate the process, we were able to request tickets to the PUMA YARD and PUMA SOCIAL events. (these events were publicised on social media and ticketing was allocated almost instantly for every day!)

What are these events?

Well, starting on the 27th of July and running the duration of The Olympics, PUMA has opened up an experience zone on Brick Lane.  In the open air “YARD” they have an Usain Bolt running challenge, ping pong, food (oh my god fantastic jerk chicken and pork, as well as goat curry!) and cocktails featuring Jamaican rum.  Are you detecting a theme?  Yes, it is Caribbean inspired – PUMA is a sponsor of the Jamaican athletics (track and field) team so you can imagine the vibe!

And on selected nights they have the “SOCIAL” zone featuring live acts, with comfy sofas.  That is where I headed to see the Olympic Opening Ceremony.

Although I started my first shift as a Gamesmaker volunteering at the road cycling events at the crack of dawn on Saturday, I have never been able to resist a good party, or good tunes.  Along with DH, his colleague, and James my running coach, we all hung out waiting for the broadcast to begin.

Me and James, in firm agreement that on nights like this, the candle is meant to be burned from both ends – you only live once!

I have to say that the beginning of the ceremony was a bit shambolic – there were DJs booked to spin and the organisers were not going to have the sound on for the ceremony. Um, not a good plan.  Hearing this was the case James and I sprinted off to find a screen to see the ceremony, but DH and his friend stuck it out.  Eventually the organisers turned on the sound, DH texted me the news, and James and I headed back to see the rest of the ceremony (I reckon we missed the first 20 minutes due to faffing about).  James jokingly told me to look at the running around as a series of 800m intervals. It’s a good thing I have a sense of humour – my glutes were still killing me from the prescribed jumping sumo squats he had me doing the night before!

The venue was a great place to watch the ceremony.  As you know I LOVED the music at the opening ceremony – the drum and bass backbeat.  Being around a bunch of party goers gave the opening a real rave atmosphere. 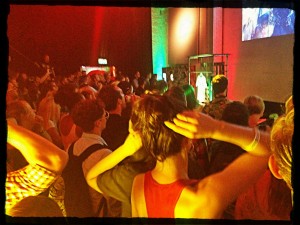 It was a great place for people spotting.  Allegedly Usain Bolt himself had been in on the 26th, along with members of the Jamaican Olympic team and delegation.

I spotted Bangs of Bangs & A Bun and Spike & Heels fame.  I’ve followed Bangs for years on Twitter so it is always nice running into her at events. (no I am not a stalker – promise!) 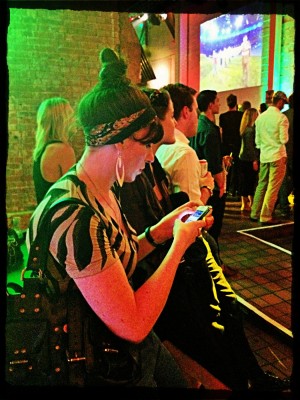 Seems Bangs is the resident PUMA blogger for the duration of the YARD!  Way to go!

DH wound up leaving the party a bit earlier than James and I, which was okay by me.  In addition to being a genuinely good guy, James is about 6 foot 4 (maybe taller) and an ex-professional rugby player, so I felt like I had my own personal body guard for the evening – no one gave me a hard time which was brilliant.  Hanging out with a super tall guy presents its own challenges, like finding the best place to stand so as not to block anyone’s view.  But this minor challenge aside, we had a few rum cocktails (I swear I was doing the 1 litre of water for each alcoholic drink) and hung out by the outdoor bar playing nation bingo and then headed inside to enjoy Groove Armada. 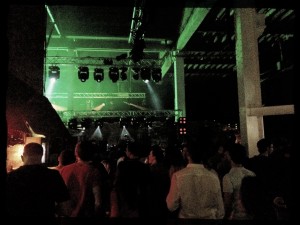 I suspect that if the lingering thought of a pre-5am wakeup hadn’t been in the back of my mind I would have partied a bit harder, and charmed James onto the dance floor.  We stayed until the fireworks had gone off and then headed home.  I managed to crawl into bed by about 1.30am to clock a sub 4 hour sleep.  I know my 20 year old self would laugh at my 40 year old self for being such a wimp – the amount of sleep was definitely not ideal for a twelve hour shift of marshalling.  But my 20 year old attitude prevailed – caffeine, a healthy dose of adrenaline, and a perma-smile ensured Saturday was a (slightly sleep deprived) success.