Last week saw me not only busy with the road cycling event and related training, but I was also fortunate enough to receive a free ticket to the technical rehearsals for the opening ceremonies.  Everyone volunteering at The Games was invited to enter a contest to win a ticket – and of course I entered the draw, it was an opportunity not to be missed!

The technical rehearsals were held on both Monday and Wednesday evenings last week.  Both nights, late at night, we could hear the fireworks from our house.  So I guess they ran through the entire show.  As invitees we were allowed to see everything up until the Parade of Nations – meaning that we missed the ending, the lighting of the flame, the release of the doves.  We also missed out on some of the key bits of the performance – not everything was clear.  For example, when Chariots of Fire was played we had no idea that Mr Bean was accompanying it on the evening.  But we did hear the big old tuba blast at the end and knew something was up!

In the age of social media the organisers did a really clever thing – they created a hashtag and brought us into the inner circle of magic that was the opening ceremony, inviting us all to “Save The Surprise”. 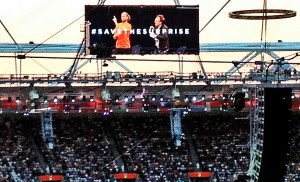 I must admit everyone I know did just that – none of my friends let the cat out of the bag. Of course, the organisers did with their photo release the day of the ceremony – but only a little.  The still shots shown all over the media on Friday morning did not do any justice to the actual ceremony itself.

I had real nosebleed seats – up on row 74 (of 75) on the upper tier.  But surprisingly this didn’t make me feel any less a part of things.  The atmosphere – even for the rehearsals – was incredible. 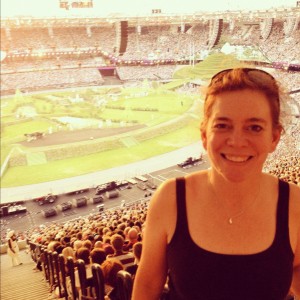 I think that is because as a spectator in the stadium the ceremony was really a music and light show.  The rhythms pounded in the background, like a nightclub featuring drum and bass.  It was infectious – a toe tapping, rave inducing beat.

The build to the industrial revolution was amazing.  The drumming rhythm kept pace with the tear down and build up of the new scenery, driving the transformation.  My friend Katherine was a drummer and I must say hats off to everyone who did that role – it must have been exhausting! But at the same time that drum backbeat made me feel like jumping up and down, raving, celebrating.  It was awesome.  It appealled to my nightclubbing youthful self – ah those were the days (I mean nights)! (I am permanently reminded of my youthful dancing nights spent in front of speaker stacks by the tinitis sound of cicadas in my ears!) 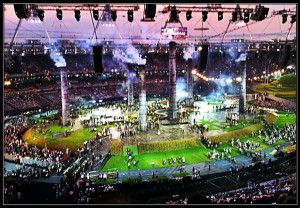 Clearly parts of the ceremony were devised for television.  Like the flaming rings.  From the audience you saw them lift up and light up – but it was the aerial shot that made that scene so spectacular. 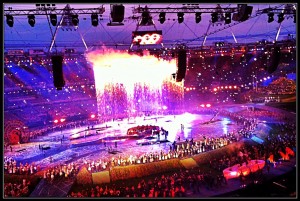 Although I appreciated the middle section – the tribute to the national health service, woven in with fairytales and nightmares, I have to admit, I just wasn’t a fan of it live.  I do however think it was really a nice touch to have nurses and patients involved in the show – and also that all of the hospital beds used in this scene have been donated to Tunisia. 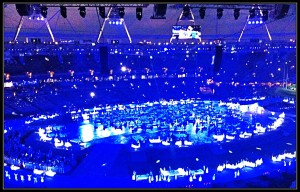 The build up to the Parade of Nations featured some amazing music.

I heard rumour that the Sex Pistols didn’t make it onto the NBC broadcast of the show in the US.  How awful if that’s true – if I could have been any performer on the night I swear I would choose one of those punks on blades! So cool!

And who can fault the inclusion of The Prodigy?!  I was so excited.  Perfect music to accompany big flame bursts. 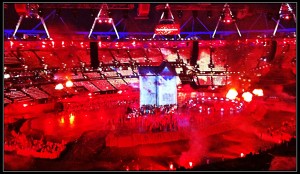 Any ceremony that has The Prodigy AND The Sex Pistols wins in my book.

I stopped taking photos at this point of the evening – because I became entranced.  A tribute to the victims of the July 7th bombing began – the last segment before the Parade of Nations.  I had to fight off tears.

The day after London was awarded the 2012 Olympics, four suicide bombers attacked central London.  That day – 7 July 2005 – is imprinted permanently in my memories.

One of the bombs went off very close to where I live, about a 10 minute walk away.  As I walked to the tube sirens screamed down the big street by my house.  When I got to the station they announced that the tube was shut due to power outages, so I – along with almost every other Londoner – decided to walk to work.  Picking my way through the city I stopped wherever there was a television screen to see what had happened.  The mobile phone network had been shut down so I couldn’t call work to let them know that I would be late.  When I finally got to the office, around 10:30 that morning, I walked into a staff head count.  The tube had been bombed and we were “missing” a few people – thankfully all like myself had decided to walk to work and were delayed, so we did not have any victims from the attacks.  Just a day after The Games were given to London, suicide bombers tried to take away our joy.

Pictures of all those who died in this senseless tragedy were shown on the screens at the stadium (and on the television during the live broadcast), and then the most beautiful song and dance choreography began.  I was completely entranced, and didn’t take any photos.

If you know me, you know that I am a big skeptic of dance in a stadium setting – I just don’t think it really works.  But Akram Khan’s piece did – it was captivating. 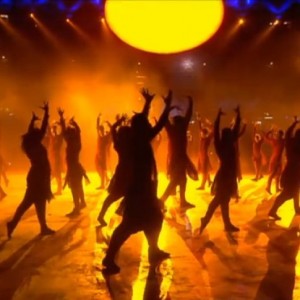 Photo from the BBC iPlayer and London Dance

The rhythm reminded me of a heart beating.  The dust bellowing reminded me of bombs.  The orange clad dancer embracing his young self screamed lost innocence.  The piece was a mix of colour, sound and emotion that just PERFECTLY CAPTURED what happened on 7/7…

I can’t believe NBC cut this piece from its broadcast.  It was a piece of healing – an acknowledgement that we have to accept the loss of innocence in order to grow up and move forward in reality, a reality in which war and religion are once again at the forefront shaping our destinies.  The piece was also a reminder of the Olympic ideal – that our grievances should be set aside during the Olympics to focus on the peaceful gathering of nations to celebrate sport which can unify us all…

I found this clip on YouTube, so it isn’t the best quality – but at least if you haven’t seen Abide With Me due to silly broadcasting decisions, you can see it here.

I was completely blown away by the London opening ceremony dress rehearsal I saw on Wednesday the 25th.  So you can imagine my reaction on Friday the 27th…