I don’t know where to begin. For the past 10 days I have been sucked into Olympic-mania.  It started with training at Sandown for all road event volunteers – all the volunteers for the marathon, race walking, road cycling, cycling time trial and triathlon events gathered over the weekend of July 21st to have the last run-down on their events before The Games began.  Then mid-week the triathlon team had our venue training at Hyde Park – so that we could learn all the ins and outs of the Hyde Park set up, and also meet our teams and walk through our sectors for race day.  Then the big day was here before I knew it…

I felt like a kid going to my first day at school.  Bright eyed and bushy tailed I set our from my house before 5.30 in the morning to get to Hyde Park.  I was quite sleep deprived, having been to the Groove Armada / PUMA party for the opening ceremonies and not climbing into bed until 1.30 in the morning.  But there is a lot to be said about adrenaline and a good attitude taking you through a sleep deprived day. 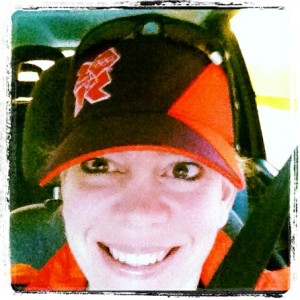 It’s stunning walking into Hyde Park to check into your shift.  The park, as always, looks gorgeous.  But there is something about all of the banners and bunting everywhere.  London is truly dressed for the occassion that is the 2012 Olympics. 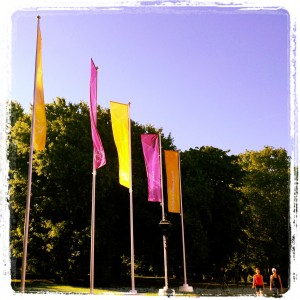 Also nothing beats London in the sun…

Although my check in for cycling was in Hyde Park, I was on the roads of central London.  There were 5 people in my team, and we were assigned a road crossing point near Fulham Broadway.

There were a few stressful moments.  The first was getting to the site – the bus driver got stuck in a huge traffic issue as all the roads leading to the course route were shut.  But we got there.

It was great to be teamed with Wendy – we had marshalled last year’s triathlon test event together and got along really well, so I knew that I would have a lovely day.  The sun was shining on day one and we settled in to our roles. 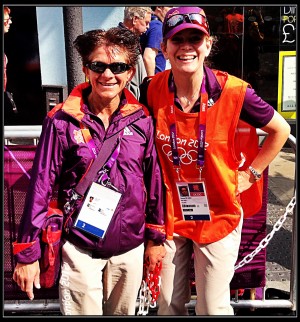 In some ways the job – letting people cross the street when it is safe – was really kind of easy.  But there are were pitfalls.  The second source of stress came from needing to stay alert after such little sleep.  In a cycling race there is a lot of high speed vehicle traffic.  A motorcycle entourage, police, ambulances, team cars, organiser vehicles, press…  The roads are closed so these vehicles travel FAST.  And I mean FAST.  And the fact that people are in central London and allowed to break the speed limits (20-30 mph) as the roads are closed means that we needed to be vigilant about keeping our eyes open for cars and motorbikes.  On Day 1 we made a judgment call and let people cross mid-race – the pavements were so crowded and agitation levels so high that we felt it was the best way to manage the situation. But the experience was incredibly stressful so on Day 2 we decided to hold fast with no exceptions.

A key part of marshalling a big event is the need to make friends.  Not everyone who lines the race route is happy to be spectating an event.  Lots of people were just trying to get from point a to point b but got caught by the race.  We had to keep them happy and not let any irritation flare up (because when one person starts to shout, it is like permission for a crowd to join in).  We needed to figure out ways to keep the aggitated public happy.  I discovered that I could instantly defuse a situation if I told people that their good looks and charm couldn’t change my mind – a little humour and a lot of flattery really helped some sticky situations – a great life lesson…

10am at the men’s race on Saturday

With a cycling race on an out and back course a spectator basically has two chances to see the racers – when they head out, and when they come back.  So for the men’s 250km race that meant the start at 10am and closer to the finish at about 3.30pm, and for the women’s 140km race the start was at noon and then we saw the riders again around 3.30pm. 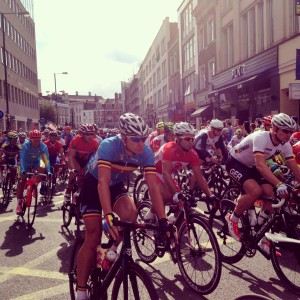 The racers literally zoom by.

They push a high speed (nearly 25mph) for the entire race.  Lizzie Armitstead, the silver medalist from yesterday’s race, said in a post-race interview that she raced so hard she just couldn’t even feel her legs for the second half of the race.  Unbelievable endurance.

When I think about their achievements and endurance it makes me feel just silly for complaining about tired legs.  But I’m not going to sugar coat, I am full of fatigue for standing around for hours this weekend.

That said, every moment was worth it.  This picture was taken of me by one of the spectators at yesterday’s women’s road race (he emailed it to me last night).

“Great smile – thanks for your hospitality! From Don”

Our section received a cheer led by the spectators, thanking us for making the experience so good for them.  We all took a bow.  And when I went to my friend’s house last night post-shift to join in some BBQ fun, everyone cheered for me there too.  It was all overwhelming, the support and kind words from friends and strangers alike…

The two days were fantastic – fatigue or not – and I am so proud that I get to both be a part of AND share the magic of the Olympics.

Today, Monday, it’s a real come-back-to-reality moment as I’m back in the office today!  Thank goodness we have our work television screens set to show The Games!